Music occupies the mysterious realm of metaphor, expressing realities which cannot be put into words. For American composer Michael Torke (b. 1961) music is inextricably bound to extramusical associations like colors, memories and feelings. His evocative titles give us a glimpse at these associations. In a previous post we looked at Torke’s synesthesia, a neurological blurring of the senses which allows him to “hear” colors.

December for string orchestra was written in 1995. Why do you think Torke chose this title? Is there something about the music which specifically feels like December? For me, there is something satisfying about the the way Torke’s music neatly unfolds with one small musical cell and harmony spinning into the next. Consider the role of repetition and gradual change in the music:

Now that you’ve heard December, here is what Michael Torke has to say about the piece. His description sheds some light on mysteries of the creative process. Some questions worth considering: What is the source of a musical idea? Do extramusical associations unlock musical ideas for Torke, or are they just a simultaneous byproduct?

I remember experiencing a kind of cozy cheer in the early days of winter back in suburban Milwaukee, when, on the rounds of my afternoon paper route, I would anticipate with pleasure the forecast of the season’s first snow. The cold and the precipitation never bothered me; I loved the season: young girls wrapped up in parkas with only their bright faces showing, outdoor Christmas lights being strung out on the front lawns, warm meals waiting when I got back home. Music never literally represents things, but it does evoke feelings, impressions, and sometimes memories. In writing this piece, I noticed that the music that came out didn’t just refer to itself — it is my habit to set up certain compositional operations to give each piece its own profile — but that the music seemed to refer to things outside of itself. This is something I discover as I’m writing; it is not that I set out intending to describe the last month of the year through music; rather, the associations creep up on me, as I’m composing. I had originally called this piece Rain Changing to Snow because at first the listener might hear a kind of musical ‘precipitation’, a resultant wetness that comes from some of the strings sustaining notes that are moving in the other instruments. And as this develops, the music moves to a more tranquil key, where it sounds as though the rain has turned to snow and there is a strange stillness everywhere. But to me the music is about more than meteorological patterns. In my goal to write more thematic music which is less process oriented, I believe this music can afford a wide range of responses in the listener. I am against music that is merely cerebral, and I welcome the simple, physical experience of listening, and responding directly, without undue brain circuitry. 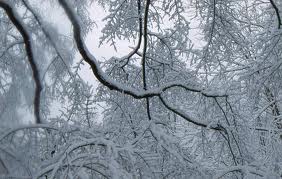