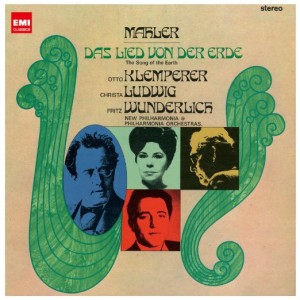 As late summer fades into fall, this seems like a good time to listen to the final movement of Gustav Mahler’s Das Lied von der Erde (“The Song of the Earth”). The text, based on ancient Chinese poetry, evokes seasonal cycles…a sense of death, separation, and resignation, followed by rebirth, loss of the ego, and ultimate immortality. In this music, completed in 1909 near the end of Mahler’s life, the endless forward drive of Western music, everything from the first four notes of Beethoven’s fifth to the epic climax of a Wagner opera, dissolves into something more circular and timeless. As Leonard Bernstein mentions, “death becomes a synonym for eternity,” and, in the end, both are greeted with peaceful acceptance.

Bernstein called Das Lied von der Erde “Mahler’s greatest symphony.” In this blend of symphony and song, there is never a sense of the orchestra merely accompanying the vocal line. Instead, all voices are seamlessly integrated. The work is scored for a large orchestra, including two harps, mandolin, glockenspiel and celesta. But small groups of instruments often converse with each other, creating the intimacy of chamber music. In Mahler’s music, each instrument’s distinct persona becomes especially vivid. Listen carefully, and you’ll hear that each voice has something to say, and although we can sense pain, melancholy, joy, transcendence, and more, the message is impossible to capture in words.

Mahler added “symphony” to the title, partly to overcome the perceived “curse of the ninth.” (As we discussed in a past Listeners’ Club post, composers from Beethoven and Schubert to Bruckner died after completing nine symphonies). But Das Lied von der Erde was not included as a numbered symphony and Mahler’s Ninth Symphony became his last completed work.

The final lines were written by Mahler:

The dear earth everywhere blossoms in spring and grows green
anew! Everywhere and forever blue is the horizon!
Forever … Forever …

Here is the sixth and final movement of Das Lied von der Erde, Der Abschied (“The Farewell”). It’s a finale that is as long as all of the other preceding songs combined. This is Otto Klemperer’s 1966 recording with mezzo-soprano Christa Ludwig and the New Philharmonia Orchestra. (Mahler frequently wrote for mezzo-soprano, favoring the slightly darker tone color in contrast to the brightness of a soprano). As a young man, Klemperer knew Mahler and served as his assistant during the premiere of Mahler’s Eighth Symphony (the “Symphony of a Thousand”).