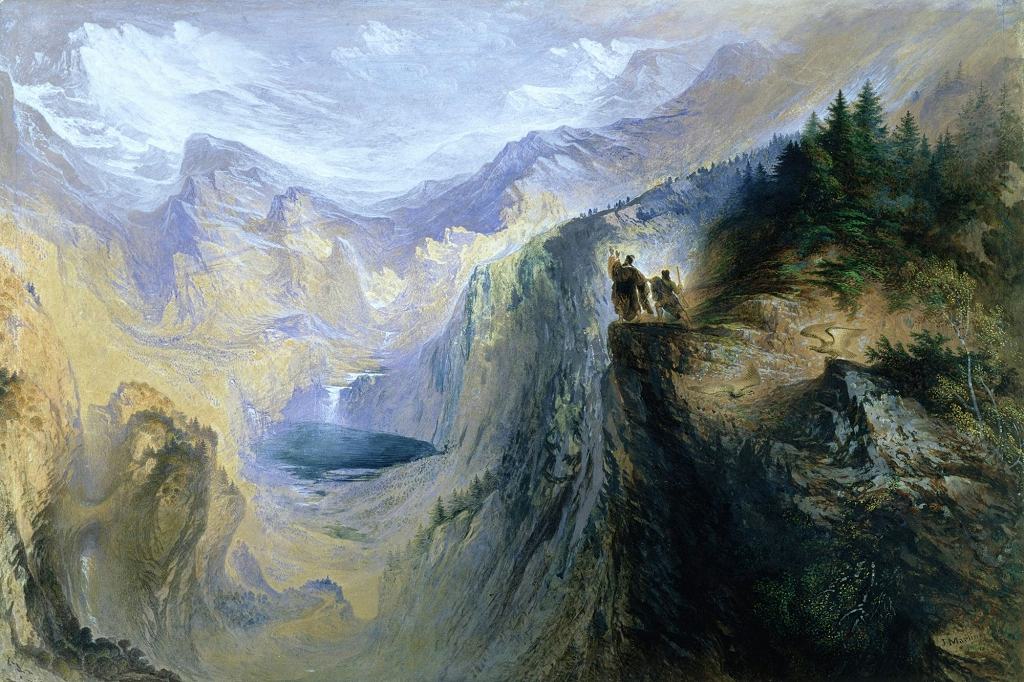 The stars are forth, the moon above the tops
Of the snow-shining mountains.—Beautiful!
I linger yet with Nature, for the night
Hath been to me a more familiar face
Than that of man; and in her starry shade
Of dim and solitary loveliness,
I learn’d the language of another world.

Demons inhabit Lord Byron’s Manfred. In the 1,336-line dramatic poem, Manfred is tormented by guilt surrounding a mysterious past transgression which resulted in the death of his beloved Astarte. Only death can relieve his suffering.

Completed in 1817, the poem is infused with the themes of nineteenth century Romanticism: the supernatural, the solitary, transcendent hero. Similar themes surface in Goethe’s Faust, a work which influenced Byron. There’s also an autobiographical undercurrent to the story: Manfred was written after Byron’s marriage fell apart following accusations of his involvement in an incestuous relationship with his half sister.

Byron’s dark “metaphysical drama” inspired music by Schumann and Tchaikovsky. Let’s plunge into the depths of full-blown Romanticism and listen to these two pieces:

That’s the chilling effect Byron’s poem had on Robert Schumann in 1829. Almost twenty years later in 1848, as Schumann increasingly suffered from the inner voices of auditory hallucinations, he wrote incidental music for the poem. Manfred: Dramatic Poem with Music in Three Parts (Opus 115) was premiered at Leipzig’s Gewandhaus in 1852. Schumann told Franz Liszt, who conducted the premiere, that the work “should not be advertised as an opera, Singspiel, or melodrama, but as a ‘dramatic poem with music.’ That would be completely new and unprecedented.”

The most enduring music from Schumann’s incidental music is the stormy Manfred Overture. The overture’s wild chromaticism and the occasional obsessive repetition of short phrases gives us a sense of inescapable torment until the grim, quiet finality of the final bars. There’s a brief passing moment that bears a slight, superficial resemblance to a melodic fragment in Mendelssohn’s Overture to A Midsummer Night’s Dream.

Here is George Szell’s classic recording with the Cleveland Orchestra:

Tchaikovsky’s Manfred Symphony began as a blueprint, similar to a treatment for a film. Mily Balakirev, the unofficial dean of the nationalist movement in Russian music, persuaded Tchaikovsky to write a programmatic four-movement work after Byron’s poem. Balakirev supplied a detailed program, as well as recommendations for key signatures, modulations, instrumentation and other elements, most of which Tchaikovsky disregarded.

Tchaikovsky was deeply conflicted about the work. Shortly after its completion in 1885 he wrote,

It is my opinion that my symphony will be the best of all my compositions in symphonic form… I am very proud of this work, and want those persons whose sympathy I most value in the world… to experience, when they hear it, a reverberation from the enthusiasm with which I wrote it.

Later, in 1888 he expressed a desire to destroy all but the first movement and rework the symphony into something similar to the tone poem Romeo and Juliet. But these changes were never made and the work remained in its original form:

As for Manfred, without any wish to make a mere show of modesty, I would like to say that it is an abominable piece, and that I loathe it deeply, with the exception of the first movement alone. However, I should tell Your Highness that shortly, with the agreement of my publisher, I shall destroy completely the remaining three movements, which musically are very poor (the Finale is particularly loathsome), and out of a large, impossibly long symphony, I shall make a Symphonische Dichtung. Then, I am sure, my Manfred will be capable of pleasing. Indeed, it must be so: the first movement I wrote with pleasure—the remaining ones are the result of exertion, from which, I remember, I felt for some time very ill.

In terms of structure, the Manfred Symphony can’t escape the influence of Berlioz. An idée fixe, first heard in the opening of the first movement, runs throughout the work. The third movement illustrates a pastoral scene, similar to the third movement of Symphonie fantastique. But the musical language is pure Tchaikovsky. For example, listen to the swirling strings a few seconds into this passage, reminiscent of Tchaikovsky’s Dante-inspired Francesca da Rimini, Op. 32. There are echoes of Swan Lake (this earth-shattering climax at the end of the first movement) and the yet-to-be-written Sixth Symphony.

The Manfred Symphony is the epitome of program music, and that may be both its strength and weakness. The drama of Byron’s tortured poem comes to life powerfully in a way comparable to a Richard Strauss tone poem. But in the end, music must be able to stand on its own, transcending the literal and moving beyond word painting and storytelling. Try listening to the Manfred Symphony first as pure music. Enjoy the fiery excitement and unabashed Romanticism of the first movement. Shimmering Mendelssohnian sparkle gives way to this soaring melody in the second movement. The third movement evokes pastoral, folksy charm. At one moment in the final movement we find ourselves in the middle of a fugue.

After listening, come back and take a look at the extensive program:

I. Lento lugubure: Manfred wanders in the Alps. Wearied by the fatal questions of existence, tormented by hopeless longings and the memory of past crimes, he suffers terrible spiritual yearnings. He has delved into the occult sciences and commands the mighty powers of darkness, but neither they nor anything in this world can give him the forgetfulness to which alone he vainly aspires. The memory of the lost Astarte, once passionately loved by him, gnaws at his heart, and there is neither limit nor end to Manfred’s despair.

II. Vivace con spirit: The Alpine Fairy appears to Manfred beneath the rainbow of a waterfall.

III. Andante con moto: Pastorale. A picture of the simple, free and peaceful life of the mountain folk.

A live performance with the Bournemouth Symphony Orchestra and conductor Constantin Silvestri: