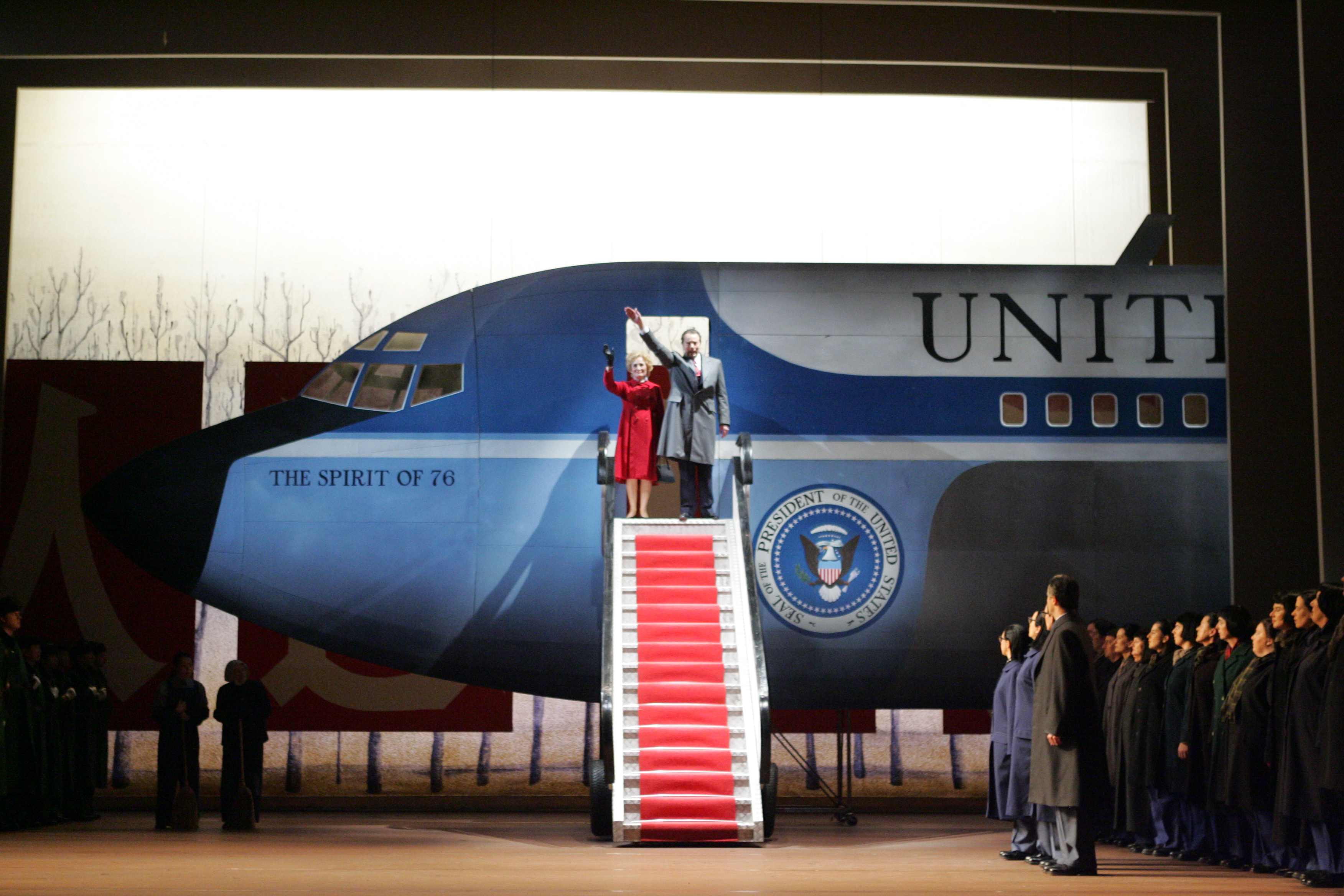 When you think of Presidents’ Day, what names first come to mind? …Washington? …Lincoln?

…My Nixon is not the historical Richard Nixon, he is every President. I take him to be an archetype of an American head of state-maybe not even necessarily a head of state, just any emotionally undeveloped man who finds himself in a position of tremendous power. It’s a particularly American figure we’ve developed. If you take that as a given and try to forget the Nixon of Checkers and Watergate, I think it immediately becomes a more interesting opera. My Nixon has as much relationship to the real Nixon as Shakespeare’s Julius Caesar does to the Roman Empire…For me as an American today the myths aren’t King Lear or Odysseus but historical figures and events, cultural focal points often blown up by the media into a mythological dimension.

In Act 1, Scene 1, a welcoming party at the Peking Airport awaits the arrival of Nixon’s Air Force One, The Spirit of ’76. Amid the atmosphere of hushed anticipation, we hear the sudden distant roar of a jet engine. Musically, the arrival of the plane and the entrance of the President and his entourage take on an almost Wagnerian momentousness. As Nixon greets the welcoming party, he retreats into the solitude of his inner thoughts. News has a kind of mystery is an adrenalized, outward-looking stream of consciousness which takes us into the world of a man obsessed with image (how he will be perceived on the evening newscasts back in the U.S where “it’s yesterday night,” and his place in history). There is only one brief moment in the aria when Nixon’s egotism seems to fade briefly into genuine contemplation (“The earth’s Sea of Tranquility“). By the end, the mood of giddiness has shifted to dark paranoia.

In the orchestra lines, we hear a hyper, unrelenting mechanical pulse, not unlike the sound of teletype, as Timothy A. Johnson points out in his analysis of the opera. Four saxophones add a touch of big band nostalgia suggesting, according to Adams, “the ideal of Nixon’s imagined Middle America.” Nixon’s grandiose comparative reference to the voyage of the Apollo astronauts is accompanied by a shift in color to the cold, technical “Space Age” sound of the synthesizer. In his autobiography, Hallelujah Junction, Adams writes,

Perhapes inspired by the primary colors of our American political campaigns and by the garish, over saturated photos in contemporary Communist publications, I opted for my own version of Technicolor orchestration. The score is emphatically triadic in a way that no other work of mine ever dared to be. At times, the orchestra functions like a giant ukulele underneath the vocal lines, chugging along with its pulses continually tripping up the listener’s expectations.

John Adams wrote The Chairman Dances for a proposed scenario in Act 3 which ended up being cut. First performed by the Milwaukee Symphony, this pulse-driven musical joyride has found its way into the concert hall. Here is John Adams’ description:

The Chairman Dances began as a “foxtrot” for Chairman Mao and his bride, Chiang Ch’ing, the fabled “Madame Mao,” firebrand, revolutionary executioner, architect of China’s calamitous Cultural Revolution, and (a fact not universally realized) a former Shanghai movie actress. In the surreal final scene of the opera, she interrupts the tired formalities of a state banquet, disrupts the slow moving protocol and invites the Chairman, who is present only as a gigantic forty-foot portrait on the wall, to “come down, old man, and dance.” The music takes full cognizance of her past as a movie actress. Themes, sometimes slinky and sentimental, at other times bravura and bounding, ride above in bustling fabric of energized motives. Some of these themes make a dreamy reappearance in Act III of the actual opera, en revenant, as both the Nixons and Maos reminisce over their distant pasts.

You can hear echoes of the minimalism of Steve Reich and Philip Glass in The Chairman Dances. A few seconds into the opening, we’re confronted with the almost frightening growl of an unrelenting, earthy bass line. Amid repeating patterns, sparks fly in the form of shimmering splashes of orchestral color. Piano triads rise out of the texture. But, despite the slightly unsettling forward drive of its pulse, in many ways this music leaves behind pure minimalism, foreshadowing the direction of Adams’ later music. At moments, we hear the lush sentimentalism of a 1940s Broadway pit orchestra, perhaps even a hint of George Gershwin. One chord (a few seconds into this excerpt) delivers the full, tragic, operatic weight we might expect in Puccini. Then there’s the soaring romantic melody that rises above the pulse and reaches an exhilarating climax at this moment in the coda.

1 thought on “Nixon in China for Presidents’ Day”