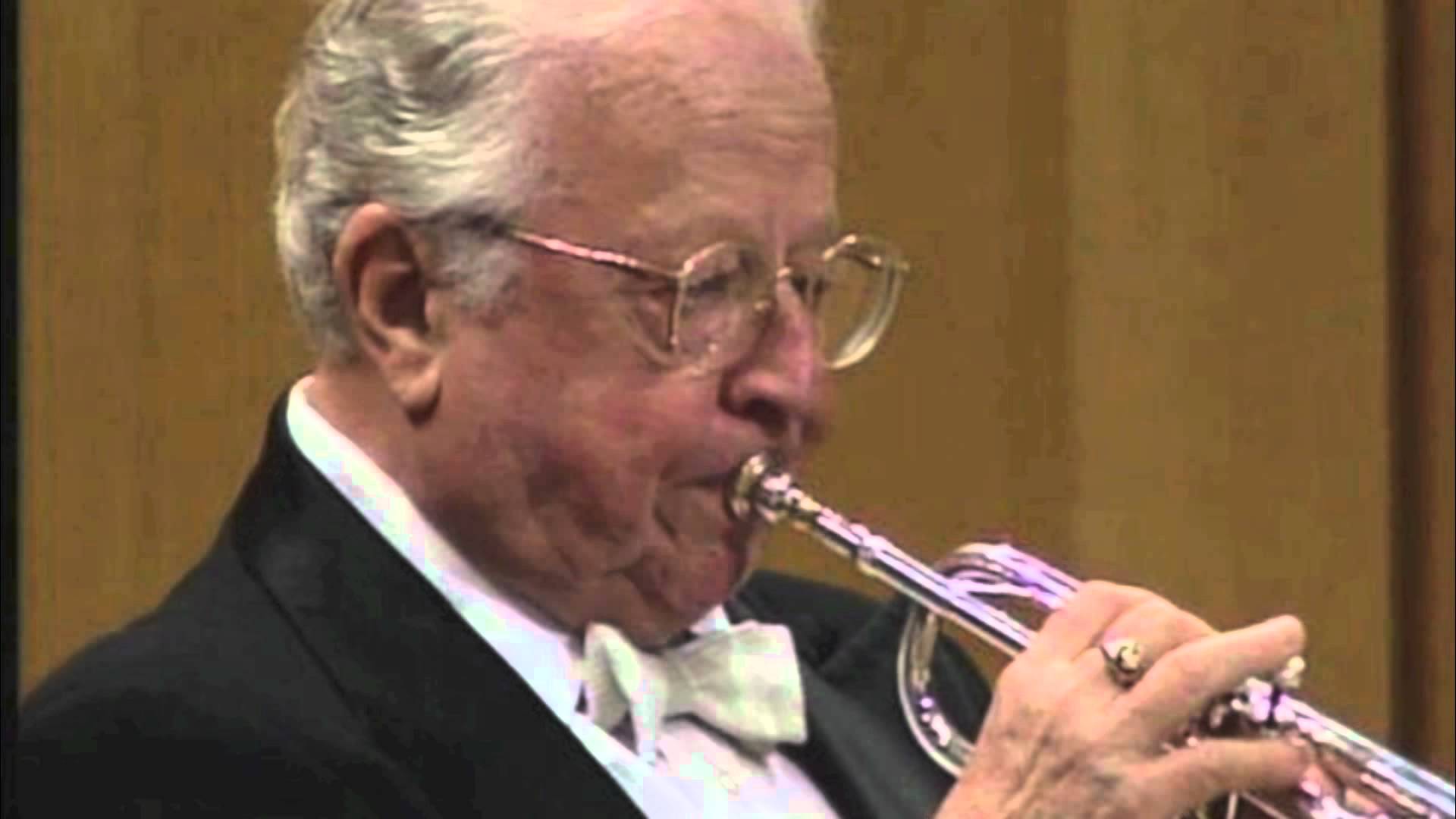 Adolph “Bud” Herseth, the longtime principal trumpeter of the Chicago Symphony passed away in April, 2013.

Herseth’s 53-year association with the Chicago Symphony began in 1948 when conductor Artur Rodzinski invited him to audition for the CSO’s principal trumpet position. Herseth will forever be associated with the distinct sound of the Chicago Symphony brass section, which developed in the 1950s and 60s during Fritz Reiner’s tenure as music director and flourished during Georg Solti’s tenure in the 70s and 80s. It was a uniquely American style of playing, celebrated for its power, precision, and brilliance.

Numerous recordings showcase Herseth’s solo playing, from this performance of the Haydn Trumpet Concerto to this 1966 concert recording of J.S. Bach’s Brandenburg Concerto No. 2. But, as he acknowledged in this profile, the core orchestral repertoire remained his true passion.

Perhaps no piece showcases the brilliance of Herseth’s playing more powerfully than Mahler’s Fifth Symphony. The first movement, a solemn funeral march, opens with the solo trumpet playing a military bugle call. This opening motive suggests the “short, short, short, long” motive which opens Beethoven’s Fifth Symphony. A stormy second movement gives way to the sunny optimism of the Scherzo, the famous harp and string Adagietto fourth movement, and a euphoric fifth movement. The Symphony moves from an opening in C-sharp minor to a triumphant conclusion in D major.

Georg Solti made two recordings of Mahler’s Fifth twenty years apart with the Chicago Symphony. I grew up listening to the 1970 studio recording. I think it may have been the first compact disc my parents owned. Many listeners think that Solti’s interpretation deepened when he re-recorded the work in 1990, and I’m inclined to agree. You can listen to both, below.

On this day of mourning, I know I speak for the members of the CSO trumpet section in offering our deepest condolences to the family of Adolph Herseth.

Bud’s impact on the music world was so monumental that every brass player alive surely has heard his brilliant, clear, inimitable tone and been changed by its clarion beauty. The astounding longevity of Bud’s 56 year career is only surpassed by the unfailingly high standard he upheld each and every day in the CSO. He was, as Daniel Barenboim aptly named him, a “pillar” of the CSO because his standard was not limited to merely equaling what he had done before but spurred on by the ideal of the excellence he could imagine. Bud combined that imagination with an unquestioning, unrelenting work ethic to do whatever it took to achieve his highest aspirations, and we have all been the fortunate beneficiaries over these 65 years.

Through his thousands of concerts, multitude of iconic recordings, and innumerable lessons and coachings, Bud had something else to teach us. It is a lesson he rarely spoke of but lived everyday: courageous sacrifice. Courage to go beyond the obvious requirements of what is expected, even if it’s more work for yourself and those around you, and a willingness to sacrifice what is comfortable and safe for something higher and perhaps unattainable. For Bud, of course, so much was attained and, in turn, given back to all.

And perhaps this is one of Bud’s most important lessons: that in the end after so much work, after endless hours honing that perfect sonic blend of strength and beauty, after countless life-changing concerts, ovations, accolades and adulations, what mattered most was the simple act of giving. Giving of his best self, his wisdom, and his heart through music. Bud spent his life in pursuit of a visionary level of trumpet artistry no one before him imagined existed and in so doing changed the course of music history.

Bud said at the end of his career that he would have started it all over again if he could. The wonderful thing about the gift of music is that he can and he does. Each time a young trumpeter hears the Reiner Zarathustra or a Solti Pictures or Mahler 5 for the first time and realizes the expressive power of a trumpet, Bud starts over again. Each time the four of us in the CSO, or in any orchestral section, or in a military band, or in a brass quintet, or in a classroom of students decides to “give it our best every time we have the chance,” Bud starts over again.

I know the CSO trumpet section feels, as Bud did, that we are all “lucky to be here,” and we share in the responsibility to try our best to uphold his legacy for the next generation.

7 thoughts on “Adolph Herseth and the Chicago Sound”