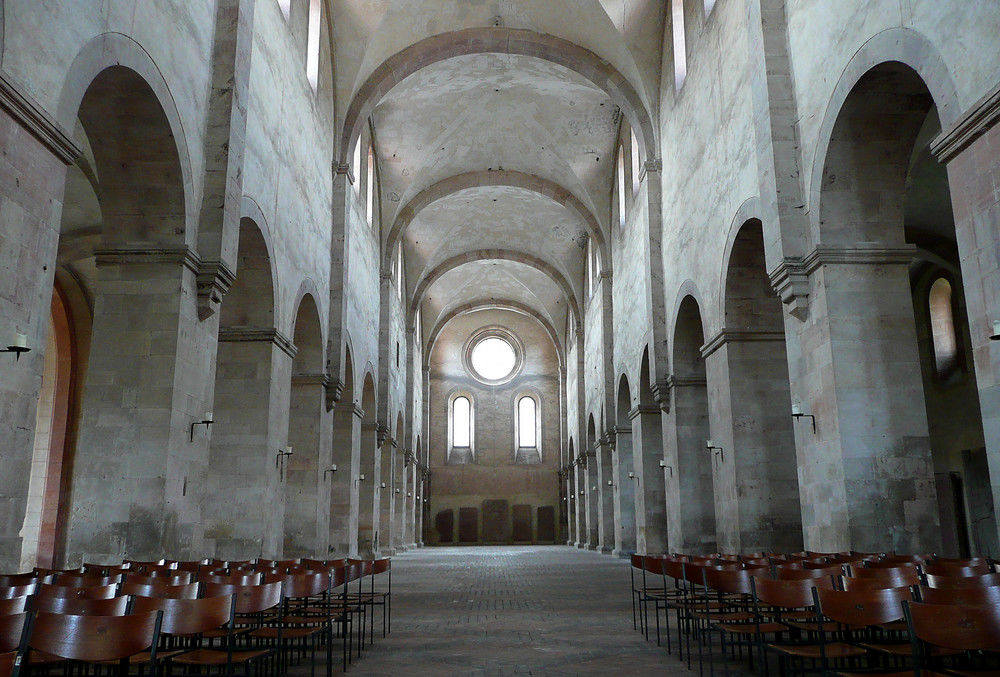 Listening to Anton Bruckner’s monumental, gradually unfolding symphonies has been compared to walking around a cathedral and experiencing the same massive, awe-inspiring structure from different vantage points. On June 19, conductor Christoph Eschenbach and the Frankfurt Radio Symphony Orchestra took that literally with a performance of Bruckner’s Symphony No. 6 at Kloster Eberbach, a monastery on the Rhein dating back to 1136 (video below).

In terms of atmosphere, the Sixth is something of an outlier among Bruckner’s nine mature symphonies. It’s the first symphony Bruckner completed after the disastrous 1877 Vienna premiere of the Third Symphony, in which only a handful of faithful admirers remained in the audience by the final note (among them, a seventeen-year-old Gustav Mahler). Bruckner, who was prone to depression and lack of self confidence, was so devastated by the event that he entered into a two year period of compositional silence. His ability to continue in the face of such harsh criticism seems to speak to his profound and solitary faith in a unique musical vision. Bruckner’s music requires deep, attentive listening. We must slow down and become one with the moment, similar to the way we listen to the gradually unfolding music of Arvo Pärt or Palestrina.

Bruckner’s Sixth Symphony is set in A major, but you’ll notice that it’s not the sunny A major you might expect. Instead, much of the symphony inhabits the Phrygian mode, an ancient church mode in which the second, sixth, and seventh scale degrees are lowered. Go to the piano, start on E and play all of the white keys, and you’ll get a sense of the mode’s distinct quality. Throughout the symphony, you’ll hear the music pulling away from A major towards distant unrelated keys such as F. This “battle of keys” and the eventual triumphant restoration of A major is part of the Sixth Symphony’s drama.

The first movement opens with a single, quietly animated rhythmic thread in the first violins. It’s a rhythm which seems implanted in the first movement’s DNA, from the triplet of the first fortissimo a few moments later, to the underlying string lines in this passage, and remaining through the final notes of the coda. And notice the way the straight pizzicato walking bass line interacts with layers of rhythmic complexity in the expansive second theme (a feeling of four against six). In the development section, listen to the way the six-note noodling figure, first heard in the strings and solo flute, becomes a persistently returning voice, forming a bizarre canon, and then growing into an ominous presence in the low strings. Bruckner gives the first movement the unusual marking, Majestoso. Nowhere do we get a greater sense of this majesty then in the coda, which searchingly modulates through every key in a series of broadly unfolding waves.

With the second movement, which Bruckner marks, very solemnly, the symphony reaches its intimate dramatic core. We hear mystery, lament, soaring gratitude, and a darkly restless funeral march. (Notice the momentary color of the trombone sound, with its supernatural connotations). Listen to the haunting dissonances which emerge in this passage, as the music reaches increasingly higher towards some unattainable goal. At the end of the almost hypnotic coda, the oboe, which is a prominent voice throughout the movement, provides one last, serenely pastoral statement.

The Adagio’s tranquil final F major chord is still ringing in our ears when the Scherzo begins, suddenly moving a half step lower with a quietly ominous bass pulse. We’ve heard this pulsating bass line earlier in the symphony, near the beginning of the first movement, again at the beginning of the coda, and in this passage towards the end of the second movement, which, for a moment, almost sounds like the orchestral accompaniment to a sacred choral work. Now this quiet bass voice summons a thrillingly turbulent dance of raw elements- strangely dark and playful at the same time.

The Finale throws us into an epic battle to reinstate A major as the Symphony’s home key. Sudden disruptive interjections in the brass punctuate the breathless, Phrygian-infused opening, eventually strengthening into a gradually forming triad. The oboe’s lamenting statement from the second movement re-emerges in this frolicking line. Just before the coda, this oboe voice drifts off into one final, almost comic question. As the coda begins, more darkly-colored Phrygian questions emerge. Shouldn’t a resolution be taking shape by now? Then, suddenly, at the latest possible moment, comes the heroism of A major in the form of the most definitively thundering triad yet. In the closing bars, a statement of the first movement’s main theme brings the Sixth Symphony full circle.

6 thoughts on “Bruckner’s Sixth Symphony: A Cathedral of Sound”