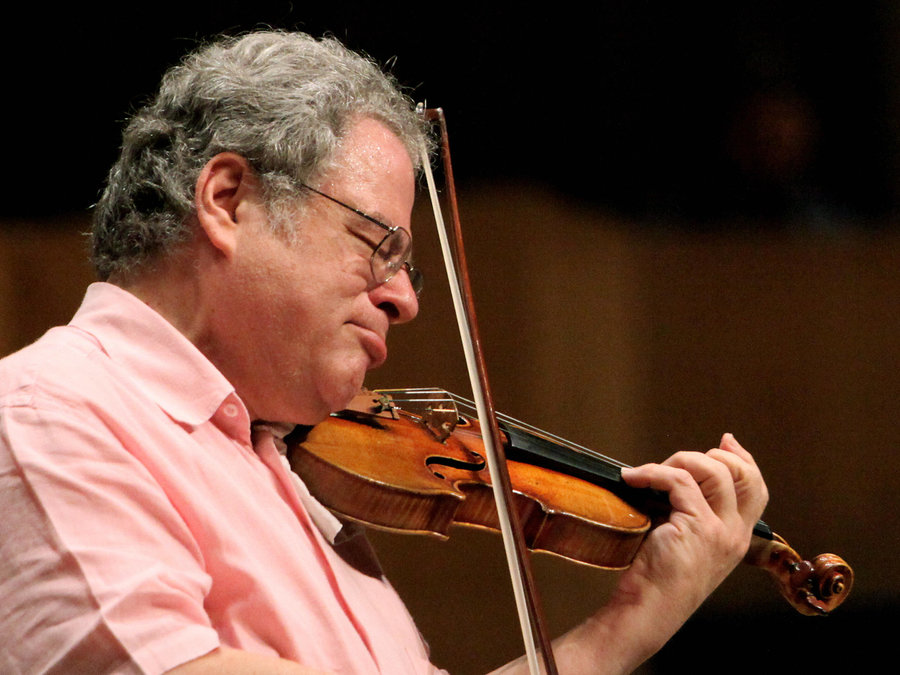 This weekend, Itzhak Perlman will join the Richmond Symphony for our season-opening Masterworks program. The Mendelssohn Violin Concerto is on the program for this already-sold-out concert. And unlike this recent BNY Mellon TV commercial, it’s safe to assume Rhea Perlman will not be attempting to fill in. (That’s the introduction of the Mendelssohn in the background of the commercial).

Perlman is one of a handful of musicians who has achieved genuine celebrity status in the wider culture. In 1958, at the age of 13, he appeared on the Ed Sullivan Show. Later, he showed up frequently on television, including appearances on Live from Lincoln Center and Sesame Street. His affable demeanor led to numerous interviews, including this 1987 New York Times profile which highlighted his passion for cooking. You heard him bringing John Williams’ soulful score to life on the soundtrack of the 1993 film, Schindler’s List.

Recently, I was surprised to discover that many of my students had never heard of Perlman. Younger generations have grown up in a fragmented media environment and what remains of mass corporate media seems to shun the performing arts. But Perlman’s contribution to violin playing is indisputable. A student of Ivan Galamian and Dorothy DeLay at Juilliard, he synthesized traditions of the past while embracing a modern, perhaps less personal style. Still, there are distinctive trademarks of Perlman’s playing. His thick, overtone-rich sound is unmistakable. He frequently plays close to the violin’s bridge, resulting in a growling, roaring intensity. In his book, Great Masters of the Violin, Boris Schwarz wrote,

Itzhak Perlman represents the perfect synthesis of artist and person: he plays as he is- warm, communicative, radiant, full of vitality and joy. His interpretations reveal thoughtfulness without brooding and an inner glow that communicates the innermost spirit of music to his listeners. Music is a natural way of self-expression for him- he speaks clearly and without affectation. But behind that apparent ease and simplicity there is much disciplined work, as well as a unique talent for music and a particular affinity for the violin.

Perlman’s newest recording will be released on September 30th. He is joined by pianist Martha Argerich for music of Bach, Brahms, and Schumann. Here are five other great Perlman recordings:

This 1986 Deutsche Grammophon recording of Mozart’s Sinfonia Concertante in E-flat, K. 364 remains one of my favorites. Perlman and Pinchas Zukerman (playing viola) are accompanied by Zubin Mehta and the Israel Philharmonic Orchestra. Opera with its drama and sense of character is often present in Mozart’s instrumental music. Here, there is an especially powerful and magical sense of dialogue:

As a teenager, I spent many hours listening to Perlman’s Encores album with pianist Samuel Sanders. The recording includes a soulful performance of Pablo De Sarasate’s Romanza Andaluza Op. 22 No. 1 and a sparkling Zapateado. The opening track is Fritz Kreisler’s Preludium and Allegro:

Concertos by Castelnuovo-Tedesco and Ben Haim

Perlman recorded Johannes Brahms’ three Violin Sonatas with the pianist Vladimir Ashkenazy in 1985. Later, he released a live concert recording of the same works with Daniel Barenboim. It’s interesting to compare the slight tempo and stylistic differences between the two recordings. Both are excellent. Here is the First Sonata from the Ashkenazy recording:

Here is Perlman’s great 1986 recording of the Brahms Violin Concerto with Carlo Maria Giulini and the Chicago Symphony Orchestra. It’s a performance which is both intensely powerful and noble: