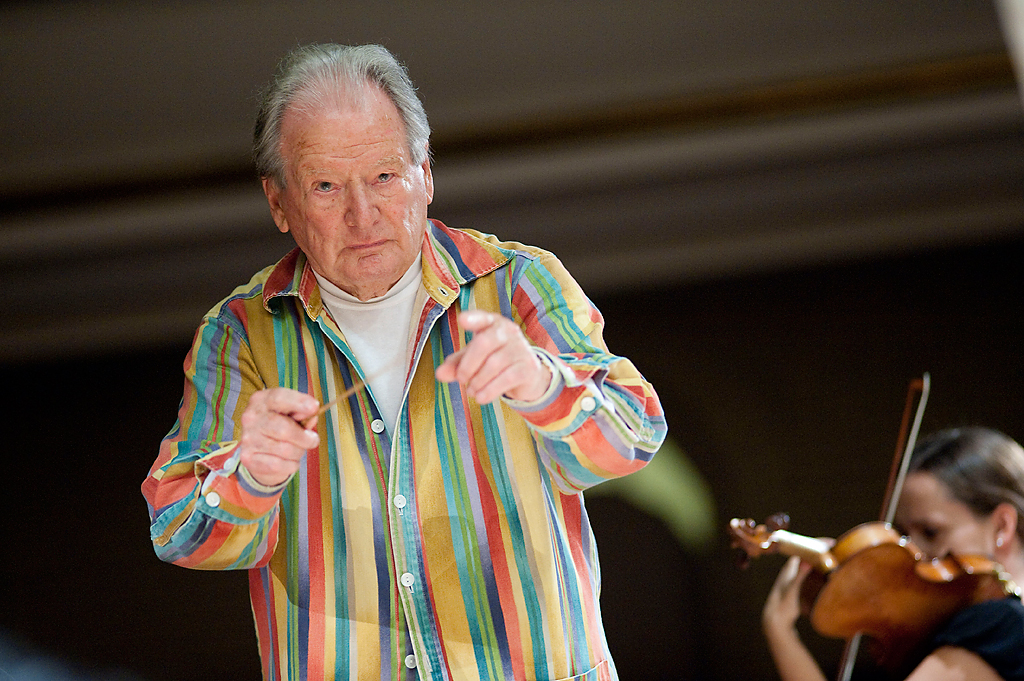 Every great conductor started out as an accomplished instrumentalist. Look at the biography of Sir Neville Marriner, who passed away yesterday at the age of 92, and you’ll be reminded of this truism. In the 1950s, Marriner performed as a violinist in two celebrated orchestras: the Philharmonia and the London Symphony. For 13 years, he served as second violinist of the Martin String Quartet. He first picked up a baton around age 40. He rose to prominence as an internationally acclaimed conductor and remained active until the end, conducting his final concert last Thursday.

Sir Neville Marriner will be remembered as the founder and longtime artistic leader of the Academy of St. Martin in the Fields. The London-based chamber orchestra (one of the world’s most recorded ensembles) began in 1959 as an informal gathering of top-tier London musicians who rehearsed in Marriner’s living room. The ensemble won a Grammy Award in 1984 for the soundtrack of the movie, Amadeus. In 1969, Marriner founded the Los Angeles Chamber Orchestra.

Marriner offered vibrant, modern performances of Baroque and Classical music. Additionally, he was a champion of English music. His repertoire was surprisingly wide-ranging, including celebrated recordings of Samuel Barber’s Adagio for Strings and George Gershwin’s Rhapsody in Blue. Here is a brief sampling of Sir Neville Marriner’s extensive discography. Please share your own favorite Marriner recordings in the thread below.

Here is a live concert clip featuring one of Gioachino Rossini’s most famous opera overtures. In the opening, Rossini seems to have employed a comically novel way of getting the attention of his audience…

No catalogue of Marriner’s discography is complete without this monumental recording of Mozart’s Requiem with the Academy of St. Martin in the Fields and soloists, Sylvia McNair, Carolyn Watkinson, Francisco Araiza, Robert Lloyd:

This recent 2014 release with pianist Cyprien Katsaris includes the world premiere of Katsaris’ solo piano arrangement of Beethoven’s “Emperor” Concerto. In the days before recordings, solo arrangements allowed the public to study newly-written music in their homes. Beethoven’s “Emperor” was written amid the turmoil of Napoleon’s European military campaigns. It’s music which is heroic in scale. Here is the first movement:

A young Joshua Bell recorded the Mendelssohn and Bruch Concertos with Marriner and the Academy of St. Martin in the Fields. But this 1991 recording with violinist Viktoria Mullova is also excellent. Here is the first movement:

Marriner recorded Robert Schumann’s four symphonies with the Stuttgart Radio Symphony Orchestra. I find this recording especially powerful. It captures both the stormy Romanticism and nobility of Schumann’s music. Here is the first movement of the “Rhenish” Symphony:

Sir Neville Marriner and the Academy of St. Martin in the Field capture the picturesque English landscape of two Ralph Vaughan Williams symphonies in this recording: