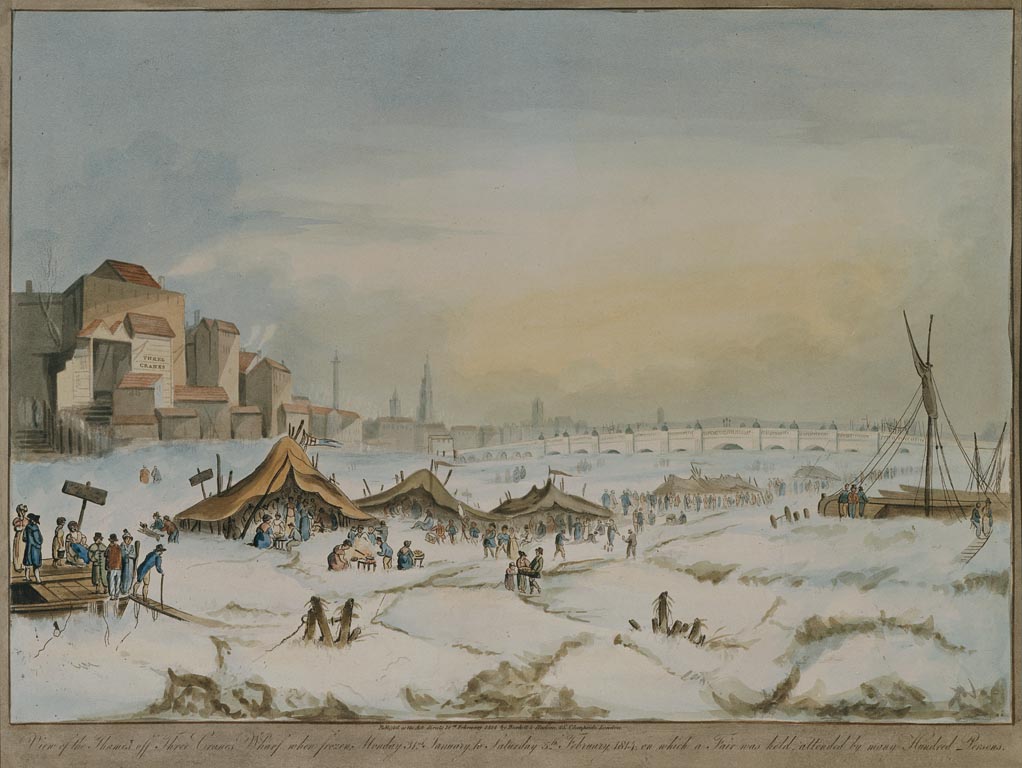 Henry Purcell’s 1691 semi-opera, King Arthur, contains a shivering musical depiction of winter chill. The aria, What Power Art Thou comes from the fantastical “Frost Scene” in Act 3 in which Cupid awakens the “Cold Genius” (the Spirit of Winter) who, frozen stiff, would prefer to just go back to bed:

What power art thou, who from below
Hast made me rise unwillingly and slow
From beds of everlasting snow
See’st thou not ( how stiff ) and wondrous old
Far unfit to bear the bitter cold,
I ( can scarcely move or draw my breath )
Let me, let me freeze again to death.

One of the most amazing aspects of this harmonically adventurous aria is how contemporary it sounds. Harsh dissonances and the strings’ sul ponticello (bowing close to the bridge) timbre evoke the sensation of biting cold. Here is Petteri Salomaa, bass, with William Christie conducting Les Arts Florissants:

You can listen to the entire “Frost Scene” from King Arthur here. The scene may have been inspired by the Frost Fairs held on the frozen Thames during the 1680s (pictured above). Between 1300 and 1870, during a time known as the “Little Ice Age,” Europe and North America experienced much colder winters than today and London’s Thames River, partially obstructed by Old London Bridge, routinely froze.

The British minimalist composer Michael Nyman’s 1982 film score for The Draughtsman’s Contract draws inspiration from the music of Henry Purcell. The track Chasing Sheep is Best Left to Shepherds is derived, directly, from the opening of King Arthur‘s “Frost Scene.” Memorial from Nyman’s 1989 film score for The Cook, the Thief, his Wife & her Lover is based on What Power Art Thou. Nyman’s music could be described as “cartoon Baroque,” with all of the mannerisms of seventeenth century music fed into endless minimalist loops. The result is something numbly detached, like a musical out-of-body experience. The pseudo-Baroque sounds of Nyman are filled with swagger. But to my ears, at least in the case of Memorial, Purcell’s original music sounds no less daring and “far out.”

Purcell’s inspiration for the “Frost Scene” may have come from a similar scene in Jean-Baptiste Lully’s 1677 French opera, Isis. This work falls into the category of Tragédie en musique, a sub-genre of French opera developed by Lully and librettist Philippe Quinault. Tragédie en musique was typically set in five acts with plots which drew upon Classical mythology. Elaborate prologues paid homage to Lully’s employer, Louis XIV, the “Sun King” who poured money into the arts and transformed Versailles from a hunting lodge into an elaborate palace. Based loosely on an episode from Ovid’s Metamorphoses, Isis caused a scandal in the court when its plot was interpreted as a reference to a bitter rivalry between two of the King’s mistresses.

In Act 4, the Egyptian goddess, Isis, finds herself on a snowy plain. In the comic L’Hiver Qui Nous Tourmente a chorus bemoans the bone-chilling cold:

Here is another performance by William Christie and Les Arts Florissants. Sharp pellets of sleet fly from the strings: