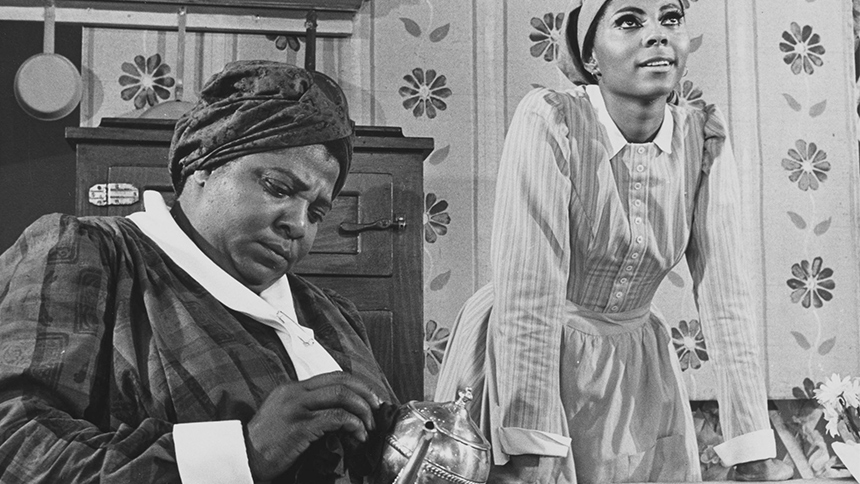 In celebration of Martin Luther King Jr. Day, here are two excerpts from Hallelujah, Baby!, a 1967 Broadway musical which has been described as “a chronicle of the struggle for equality during the [first half of the] 20th century.” The plot of Hallelujah Baby! centers around Georgina, a talented, young African-American woman who is determined to develop a career in show business despite her mother’s advice that she “keep her place” as a maid on a South Carolina estate. The music is by Jule Styne, with lyrics by Adolph Green and Betty Comden, and a book by playwright Arthur Laurents. Leslie Uggams, who appeared regularly on the popular NBC television show Sing Along with Mitch, debuted on Broadway in the starring role at the age of 24.

Originally written for Lena Horne who eventually declined the role, Hallelujah Baby! showed the struggles of African-Americans from the early 1900s through 1967. While the decades passed, the show’s main characters remained the same age, as if frozen in time. Ultimately, Hallelujah Baby! proved unsuccessful as a work of drama, mainly because Laurents’ edgier concept clashed with the show’s more lighthearted musical comedy reality. It ran for 293 performances (winning five Tony Awards, including Best Musical) and closed on January 13, 1968, less than three months before King’s assassination.

My friend and neighbor Jerry Goldberg spent years on Broadway, performing as a pianist and conductor, eventually conducting the long-running hit musical, A Chorus Line. Yesterday, I asked Jerry about his memories of Hallelujah Baby! He was quick to mention the impressive power of Leslie Uggams’ voice at a time when microphones were not used in the theater. He also recounted a fascinating story about Styne’s score. One day the buzzer rang at the Goldberg’s 79th Street apartment in New York. It was Marvin Hamlisch, who lived around the corner. Hamlisch, at that time a young, aspiring songwriter who hung around Broadway as a gofer, had been called at the last minute to fill in as rehearsal pianist for Hallelujah Baby! Leslie Uggams’ club pianist, a fine musician but one unfamiliar with the rigors of Broadway rehearsals, had been unable to play. “You’ve got to hear this!” yelled Hamlisch, tearing into the Goldberg’s apartment and plopping onto the piano bench. He proceeded enthusiastically to pound out large sections of the Hallelujah Baby! score from memory after having sight read it once.

From the Original Broadway Cast Recording, here is the song My Own Morning, performed by Leslie Uggams early in the first act:

The powerful torch song Being Good Isn’t Good Enough, also performed by Leslie Uggams, closes the first act. The song includes some extraordinary harmonic surprises which suggest the flow of Georgina’s thoughts- a stream of consciousness which gradually builds in emotional intensity.