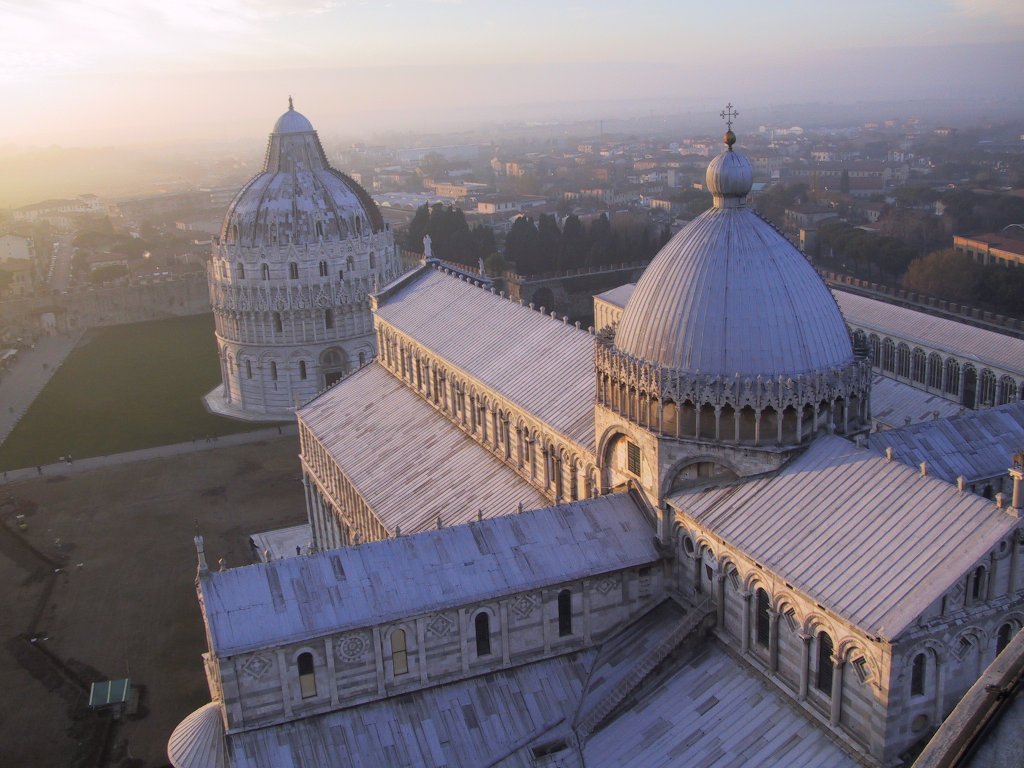 Each time we explore Bach’s music we feel as if we have traveled great distances to, and through, a remote but entrancing soundscape.

Sir John Eliot Gardiner leads the Monteverdi Choir (an ensemble he founded in 1964), the Trinity Boys Choir, the English Baroque Soloists, and a cast which includes James Gilchrist as the Evangelist and Stephan Loges as Jesus. The performance was recorded live in Pisa Cathedral (pictured above) last year, culminating a six-month-long tour. The album includes program notes and tour notes by Gardiner. The disk complements Gardiner’s earlier 1989 Deutsche Grammophone recording of this piece.

Bach wrote the St. Matthew Passion in 1727 for Good Friday vesper services at St. Thomas’s Church in Leipzig where he served as music director. It’s powerfully dramatic writing, infused with layers of text painting, structural symmetry, and even mathematical symbolism. Every time you hear this music it seems to offer something new. It allows the listener to become an active participant in the drama, especially in the chorales in which the harmony changes radically as the story unfolds. (For example, compare the initial statement of Erkenne mich, mein Hüter with this later restatement). The monumentality of the work gives us a sense of Bach’s personal spirituality (He often inscribed his manuscripts with J.J. (“Jesus help me”) and Soli Deo Gloria (“For the Glory of God Alone”).

Nearly three centuries later, this music continues to speak to audiences in powerful ways which transcend liturgy. Sameer Rahim, a Muslim, describes his profound experience with this music following a London performance in 2012. English tenor Ian Bostridge has called it, reverently, “one of the greatest pieces of music in the western repertory.” Following a 2014 New York performance, Alex Ross wrote in the New Yorker,

A more uncanny symbol of the loneliness of death can scarcely be imagined. From there to the end, many of us were in a trance, out of which the chorus jolted us with one last unexpected gesture: in the silence after the final chord, the singers turned away from the block representing Christ’s tomb and stared outward, with cold, expectant glances. They seemed to say, “You, too, are responsible.”

Bach seems to have sensed the transcendent quality of this work as well. According to musicologist David Gordon,

An indication of the special regard he held for this work is that Bach went to considerable trouble in his old age to repair the large manuscript score of the St. Matthew Passion. This presentation-quality copy, still in existence today, is unique among Bach manuscripts: he designed it beautifully, painstakingly bound and re-sewed it by hand, and carefully highlighted the biblical words in red ink. Those few who saw it after Bach’s death considered the manuscript unperformable and left the huge work unpublished and unheard until 1829 [a full century after it was composed] when Felix Mendelssohn organized [and conducted] a performance, heavily abridged, in Berlin.

From the first bars of the opening chorus, Kommt, ihr Töchter, helft mir klagen (“Come ye daughters, join my lament”), we’re thrust, immediately, into an atmosphere of darkness and foreboding. But then, as the music develops amid the soaring, conversing lines of a double chorus, sunlight seems to break through:

Throughout the work, Jesus’ words are accompanied by a “halo” of strings which only evaporate in the final lines, “My God, my God, why have you forsaken me?” But listen to the way the woodwind accompaniment goes in a strikingly different direction in the aria, Aus Liebe will mein Heiland sterben:

Here is the final lamenting chorus, which leaves Easter yet to be realized. Listen to the way crunching dissonance is stretched to the last resolution: