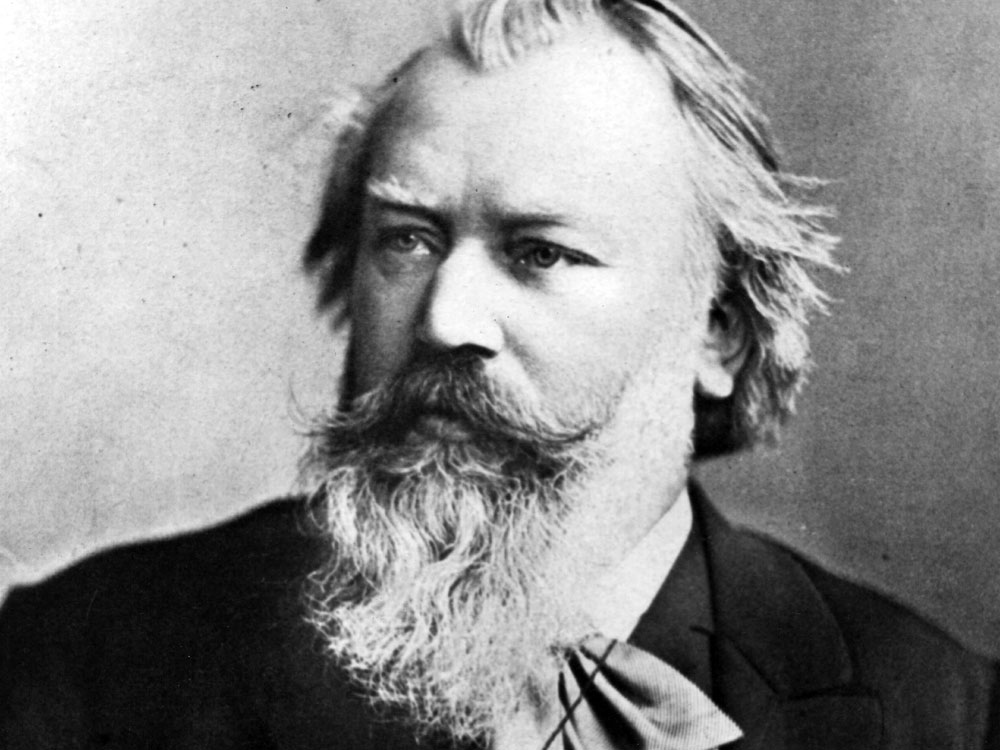 I shall never write a symphony! You can’t have any idea what it’s like always to hear such a giant marching behind you!

Johannes Brahms was nearing 40 when, in 1872, he wrote these words in a letter to the conductor Herman Levi. The “giant” was Beethoven, whose nine game-changing symphonies loomed like a dauntingly impassible mountain range in front of every nineteenth century composer who followed. By this time, Brahms was already a famous composer with a host of chamber works, songs, and shorter orchestral pieces under his belt. But a heroic symphony worthy of Beethoven’s example remained elusive. Brahms’ 1854 attempt at a symphony took a decidedly different turn, resulting in the Piano Concerto No. 1 in D minor. Perhaps adding to his symphonic inhibitions was Robert Schumann’s public declaration that Brahms was destined to be the “heir to Beethoven.”

In the end, it took Brahms at least 14 years to complete his Symphony No. 1 in C minor- perhaps as long as 21 years from initial sketches in 1855. The Symphony, nicknamed “Beethoven’s Tenth” by the conductor Hans von Bülow shortly after its November, 1876 premiere, pays homage to Beethoven in subtle and sly ways, but it also moves away in bold new directions.

You can almost hear the “footsteps of a giant” in the fate-filled opening of the first movement. Amid the unrelenting, titanic force of the timpani, the music climbs towards an ever higher summit. It’s both monumental and ominous. It’s as if this symphony, so long anticipated, is suddenly bursting forth with an unstoppable power. With a bold “here I am,” it takes its place in the musical canon. As the movement progresses, we hear this opening motive return in interesting and unexpected ways. In the development section, listen for the persistent repetition of the famous four-note rhythmic motive (“short, short, short, long”) from the first movement of Beethoven’s Fifth (also in the stormy key of C minor). This defiant motive is so infused in the movement’s inner fabric that it shows up in unexpected places. For example, listen carefully to the lower strings in this passage. Sometimes we hear it fragmented in a dizzying conversation. Then, we get an even more overt reference to Beethoven’s Fifth with a vague, momentary hint of the falling minor third motive.

In the opening of the second movement (Andante sostenuto), there’s a brief echo of the rising chromatic line from the first movement’s introduction. But here we venture into more introspective territory. Solos for the oboe and violin anticipate the slow movement of Brahms’ Violin Concerto. Instead of a scherzo, as Beethoven would have written, the third movement is an amiable Allegretto which opens with a delightfully wandering clarinet solo. The trio section slides from 2/4 time into a joyful 6/8 which becomes increasingly spirited and euphoric. As the original Allegretto section returns, listen to the way the oboe extends the trio’s motive over the clarinet’s statement.

The final movement is the culmination of everything we’ve heard up to this point. In the midst of the movement’s stormy, unsettled opening, comes a sudden, heroic horn call in C major. This sunny, transcendent statement opens the door to an expansive, majestic theme which suggests vague motivic outlines of the “Ode to Joy” theme from Beethoven’s Ninth. Following exuberantly dense counterpoint reminiscent of the music of J.S. Bach, there’s a powerful moment when the horn call motive returns amid a clap of thunder. In the performance below, I love the way the lower strings echo this motive, sinking into the depths of the lowest register. The coda moves into new, quietly haunting territory before reaching a blazing, celebratory conclusion.

Here is a 2009 concert performance with Christoph von Dohnányi and the NDR Elbphilharmonie Orchestra. The camera work provides a great visual outline of the drama of Brahms’ weaving counterpoint and motivic development. But you might have an equally rewarding experience listening with your eyes closed:

3 thoughts on “Brahms’ First Symphony: Walking in the Footsteps of a Giant”