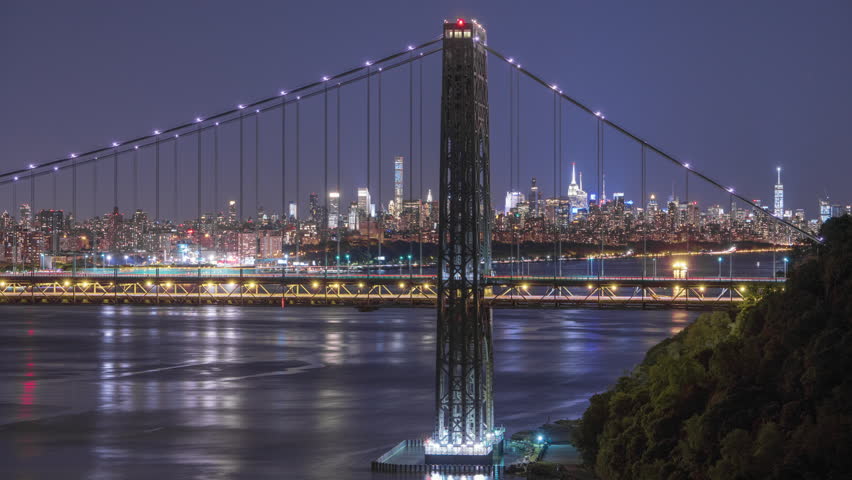 The George Washington Bridge over the Hudson is the most beautiful bridge in the world. Made of cables and steel beams, it gleams in the sky like a reversed arch. It is blessed. It is the only seat of grace in the disordered city. It is painted an aluminum color and, between water and sky, you see nothing but the bent cord supported by two steel towers. When your car moves up the ramp the two towers rise so high that it brings you happiness; their structure is so pure, so resolute, so regular that here, finally, steel architecture seems to laugh. The car reaches an unexpectedly wide apron; the second tower is very far away; innumerable vertical cables, gleaming against the sky, are suspended from the magisterial curve which swings down and then up. The rose-colored towers of New York appear, a vision whose harshness is mitigated by distance.

Art, technology, and utility meet in New York’s mighty bridges. First came the serene gothic stone arches of John Roebling’s Brooklyn Bridge- the world’s first steel suspension bridge. When it was completed in 1883, it was the tallest structure in the Western Hemisphere. At 1,600 feet from tower to tower, it was the longest span in the world, forever changing the relationship between overcrowded Manhattan and its surrounding boroughs. Moving north up the East River, the Beaux-Arts Queensboro Bridge, completed in 1909, is capped with ornamental turrets and evokes something darker, heavier, and more mysterious. The Hudson Palisades-spanning George Washington Bridge, completed as the country descended into the Great Depression, was originally intended to be covered in stone. But when the architects saw the exposed steel, with its elegant, honest expression of structure, they realized that the bridge was, in fact, already finished.

There is a muscular, industrial strength that bridges convey, while at the same time a poetic beauty expressed. Music works in a similar way, in that it combines ideas of formal masculinity with graceful femininity without these extremes being in conflict or contradicting one another…A commanding, chordal theme that opens the first movement imparts the tensile strength and monumentality of the George Washington Bridge, and yet the music becomes extremely active as the busy traffic on the bridge would be. The moody, night‐time setting of the second movement whose opening woodwind shapes echo the curving cables lit up after dark might call to mind the famous dawn scene in Woody Allen’s Manhattan. A somewhat jazzier third movement, with its broad second theme seemed fitting for one of our country’s oldest and certainly the most famous suspension bridge.

Three Manhattan Bridges was written for, and dedicated to, pianist Joyce Yang. Here is her recording, released last September, with the Albany Symphony Orchestra led by David Alan Miller.