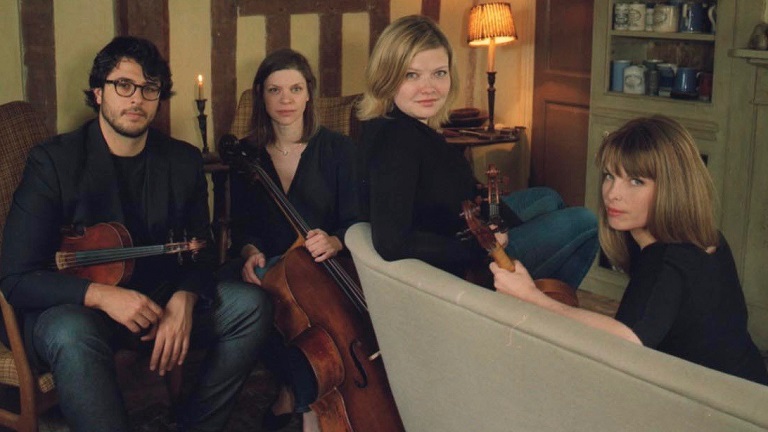 Is it possible to hear seeds of Romanticism in the string quartets of Franz Joseph Haydn? Recently, as I was listening to the Chiaroscuro Quartet’s newest album, this thought crossed my mind.

The recording features Haydn’s Op. 20 “Sun” Quartets Nos. 4-6. (Last year, the ensemble released the first three quartets of the Op. 20 set). They approach the music from a historical perspective with gut strings, baroque bows, and limited vibrato. But there is nothing remotely academic about this soulful, sometimes haunting, always dramatic playing.

The six “Sun” Quartets, so nicknamed because of a sun image on the cover of the first edition, were written in 1772 when Haydn was 40. Their wild innovations set the stage for all string quartets to come, from Beethoven and Schubert onward. Amid intense drama and Sturm und Drang, all four voices come to life as equals in these works, shattering the previous conception of the string quartet in which a first violin solo was, more or less, accompanied by the other three subordinate instruments. (Or the two violins interacted as soloists as in a trio sonata). Even more profoundly, Haydn’s quartets often give us a sense of four distinct “characters” or “personas.”

In a recent Strad interview, the Chiaroscuro Quartet’s first violinist, Alina Ibragimova, commented on the mercurial nature of Haydn’s writing:

Somehow, Haydn is unpredictable all the time. Mozart can be mischievous, but he sets it all up nicely – there’s a sense of theatre; but with Haydn, if you are not absolutely familiar with his language, he can really throw you. It’s quite edgy. Sometimes in concerts I used to feel quite tense – just the number of ideas in every bar, and you still have to make it sound spontaneous.

Listen to the first movement of the String Quartet in F minor, Op. 20, No. 5, and you’ll hear this sense of surprise. (The development section’s searching modulations are only one example). From the opening statement, there’s a haunting, melancholy quality to this music that we don’t always associate with Haydn. As the movement’s final resolution fades away into the night, we’re left in a place which seems as chilling as the darkest Schubert song:

We might expect a Haydn Menuet to be a cheerful, folksy, courtly dance. But in this case, we get something quite different:

The third movement suggests a serenely beautiful and intimate aria without words. It’s built on a lilting, siciliana rhythm in 6/8 time and, following the preceding movements, it shocks our ears with a sudden turn to major. Throughout the movement, the first violin floats above in a continuously embellishing descant. At times, this voice pushes the limits with a spirited defiance that foreshadows Beethoven. In the final bars, we get what sounds like a definitive closing cadence. But, listen to the way the descant lingers as a wispy echo before rejoining the other voices for the true cadence.

The final movement is the furthest thing from the light, witty divertimento Haydn’s audience might have expected. Instead, it moves forward with a nostalgic look back to the world of baroque counterpoint with a complex double fugue. The opening subject was a popular melodic line for many baroque fugues. It’s the same motive we hear in the And With His Stripes We Are Healed fugal movement from Handel’s Messiah, also in F minor. The fugue subject emerges in a celebratory canon between the cello and first violin in the final bars.