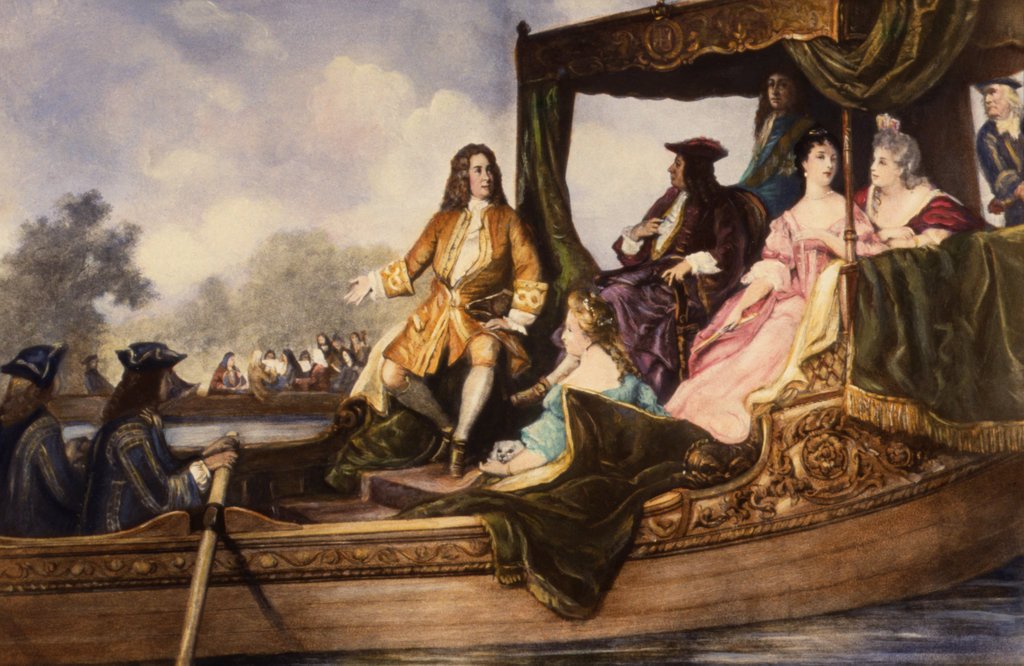 Today marks the three-hundredth anniversary of the premiere of Handel’s Water Music. The collection of festive orchestral dance movements, published in three suites, was written for King George I’s pleasure excursion up the Thames River on the evening of July 17, 1717. The elaborate summer boating party was intended to lift the King’s flagging poll numbers. As an incoming tide swept the aristocratic party upriver towards Chelsea, around 50 musicians performed on a separate barge. The boats of countless spectators jammed the river. The Daily Courant, Britain’s first daily newspaper, provided this account:

At about 8, the King took Water at Whitehall in an open Barge … and went up the [Thames] River towards Chelsea. Many other Barges with Persons of Quality attended, and so great a Number of Boats, that the whole River in a manner was cover’d; a City Company’s Barge was employ’d for the Musick, wherein were 50 instruments of all sorts, who play’d all the Way from Lambeth the finest Symphonies, compos’d express for this Occasion, by Mr. Hendel; which his Majesty liked so well, that he caus’d it to be plaid over three times in going and returning. At Eleven his Majesty went a-shore at Chelsea where a Supper was prepar’d, and then there was another very fine Consort of Musick, which lasted till 2; after which, his Majesty came again into his Barge, and return’d the same Way, the Musick continuing to play till he landed.

Three hundred years later, the King’s party on the Thames is long forgotten, but the regal, celebratory music Handel wrote for the occasion endures. From the triumphant nobility of the natural horns, to the rapid-fire, jubilant string passages, this is euphoric music which elevates our collective mood. Mozart touched on this quality when he wrote, “Handel understands effect better than any of us- when he chooses, he strikes like a thunderbolt.”

The D Major Suite’s Alla Hornpipe, Rigaudon, and Bourrée must be some of the most irresistibly fun music ever written. But even among all of this high-octane party music, there are some respites of quiet introspection, even lament. One of these rare moments comes in this Minuet from the D Major Suite. Listen to the way the movement’s courtly dance rhythm meets a sense of deep harmonic longing.

Handel is a composer who borrowed shamelessly from himself and others. This descending passage in the strings from the third movement of the F Major Suite found its way into the Overture of another outdoor suite, the Music for the Royal Fireworks, written in 1749. For an even more sly example, listen carefully to this passage from the G Major Suite’s Minuet and compare it with the opening of Worthy is the Lamb (also in G major), the final movement of Messiah, written in 1741.

Here is Trevor Pinnock’s 1983 recording of the complete Water Music with the English Concert:

Federico Guglielmo leads L’Arte dell’Arco for this more recent recording from 2008. In comparison to the recording above, the tempos are more spritely at times and there is a freer use of ornamentation.

… But Handel’s harmony affects the soul,To sooth by sweetness, or by force controul;And with like sounds as tune the rolling spheres,So tunes the mind, that ev’ry sense has ears.When jaundice jealousy, and carking care,Or tyrant pride, or homicide despair,The soul as on a rack in torture keep,Those monsters Handel’s music lulls to sleep.

-an anonymous poem in The Gentleman’s Magazine, May 1740

Photograph: Handel (left) and King George I on the River Thames, 17 July 1717. Painting by Edouard Hamman