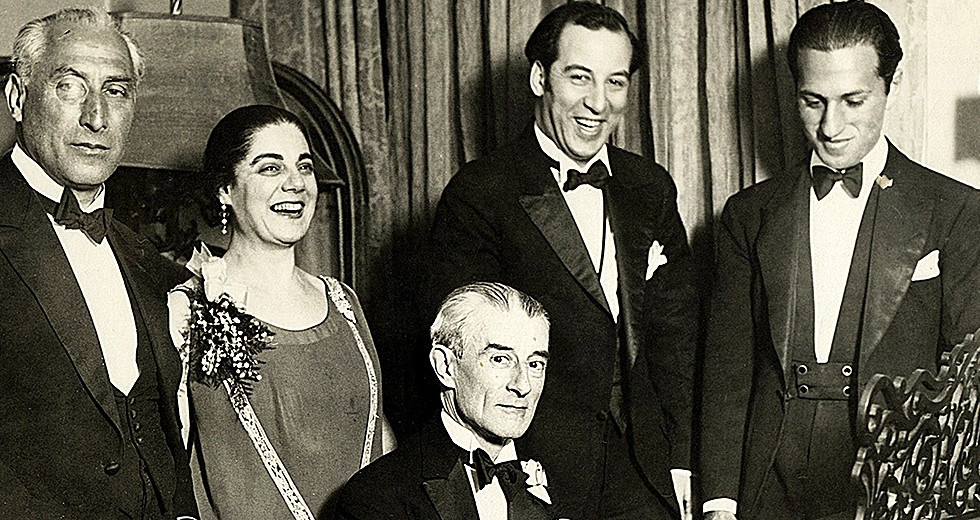 Maurice Ravel and George Gershwin came face to face in New York on the evening of March 7, 1928. The occasion was a soirée hosted by the mezzo-soprano Éva Gauthier in celebration of Ravel’s fifty-third birthday. This was Ravel’s first and only trip to the United States. During a four month, twenty city tour which included an appearance at Carnegie Hall, the French composer introduced American audiences to Rapsodie espagnole, the Daphnis et Chloe Suite No. 2, and La valse. He also soaked up the vibrant new sounds of American jazz. While in New York, Ravel attended a performance of George Gershwin’s Broadway musical comedy, Funny Face. At Gauthier’s gathering, he was impressed with the 29-year-old Gershwin’s impromptu performance of Rhapsody in Blue and excerpts from The Man I Love. As Louise Burton writes,

Ravel spent several nights with Gershwin, listening to jazz at the Savoy Ballroom in Harlem, where dancers did the Lindy Hop to hot jazz from some of the nation’s greatest bands. Ravel also visited Connie’s Inn and the nearby Cotton Club, where he heard Duke Ellington and his orchestra.

In an article published around the same time in Musical Digest, Ravel encouraged Americans to embrace jazz as a serious musical vocabulary:

Personally I find jazz most interesting: the rhythms, the way the melodies are handled, the melodies themselves. I have heard some of George Gershwin’s works and I find them intriguing.

George Gershwin, famous as a Tin Pan Alley tunesmith, but underestimated in the world of “serious” concert music, frequently asked other composers for lessons in composition. According to legend, Gershwin approached Stravinsky who asked, “How much money do you make?” When Gershwin answered, Stravinsky replied, “Then I should take lessons with you.” Similarly, Ravel declined, fearing that he would destroy the natural spirit of Gershwin’s music- that unique and improbable melding of American jazz, popular melody, and symphonic tradition. Ravel wrote the following letter to the famous Parisian composition teacher, Nadia Boulanger who declined to accept Gershwin as a student for similar reasons:

There is a musician here endowed with the most brilliant, most enchanting and perhaps the most profound talent: George Gershwin. His worldwide success no longer satisfies him, for he is aiming higher. He knows that he lacks the technical means to achieve his goal. In teaching him those means, one might ruin his talent. Would you have the courage, which I wouldn’t dare have, to undertake this awesome responsibility?

In light of all of this, it’s interesting to compare Ravel’s Piano Concerto in G Major, written between 1929 and 1931, with Gershwin’s Piano Concerto in F, written in 1925. Ravel’s music seems to pay homage to Gershwin’s Concerto. The first movement is filled with the sound of the blues, with its ambiguous shifts between major and minor. The final movements of both works share a similar rapid, driving feel. Ravel flirted with jazz in earlier compositions (the sultry Blues second movement of the Violin Sonata No. 2 from 1927, for example). And Paris had been intrigued with American jazz for a while. As far back as 1908, Debussy hinted at ragtime with Golliwog’s Cakewalk. But in Ravel’s G Major Piano Concerto, we hear the blues as if through Gershwin’s ears. Listen to both concertos and see if you agree.

We’ll start with Yuja Wang’s live performance of the Gershwin with Michael Tilson Thomas and the London Symphony. This is a piece filled with warmth and innocent, spirited melodies. Listen for the lonely, soulful trumpet solo in the second movement:

Now, here is Ravel’s Piano Concerto in G Major, performed by Krystian Zimerman with Pierre Boulez leading the Cleveland Orchestra. The first movement is launched with the sound of a whip crack. In addition to the blues, we hear the Spanish Basque sounds of Ravel’s youth. The triple meter second movement enters a kind of dreamy serenity that might remind you of Erik Satie’s Gymnopédies. Ravel gives us one brief glimpse of pure terror at the climax of this movement (listen to the chord at 14:51) before the storm clouds melt away. It’s hard to imagine anything more magical than the sudden turn to major in this passage at the end of the movement. The final movement is a slightly deranged, exhilarating romp: