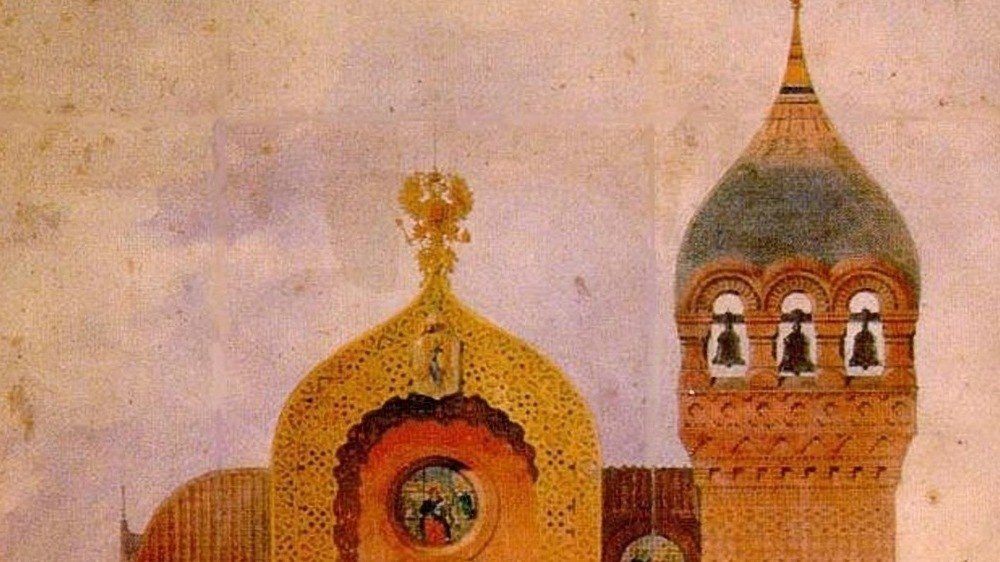 This week, I’m once again playing the great orchestral showpiece, Pictures at an Exhibition. It’s music which was originally composed by Modest Mussorgsky in 1874 as a suite of ten virtuoso pieces for solo piano, and later transformed into shimmering orchestral technicolor by Maurice Ravel. Listening to this popular orchestral adaptation, we have the sense of two works colliding, spectacularly. The rebellious, inventive harmony and folk-inspired Russian nationalism of Mussorgsky meets the refined, impressionistic color palette of Ravel.

Mussorgsky was deeply affected by the sudden death of the artist, architect, and designer Viktor Hartmann, who suffered an aneurysm at the age of 39. The suite was conceived as a musical memorial to Hartmann, with each movement depicting one of the artist’s works. It was composed in twenty days. In a letter to the influential critic, Vladimir Stasov, who organized a memorial exhibit of Hartmann’s works, Mussorgsky wrote,

My dear généralissime, Hartmann is boiling as Boris boiled—sounds and ideas hung in the air, I am gulping and overeating, and can barely manage to scribble them on paper. I am writing the 4th No.—the transitions are good (on the ‘promenade’). I want to work more quickly and steadily. My physiognomy can be seen in the interludes. So far I think it’s well turned…

From our perspective, it’s fair to say that Mussorgsky’s music has eclipsed the artwork on which it was based. Sadly, most of these works have been lost or destroyed. Ultimately, the suite’s enduring dramatic strength lies in its ability to transcend a literal depiction of Hartmann’s work and transport us to a series of new, metaphorical “places” which defy description.

Pictures at an Exhibition begins with a walking-paced “Promenade” theme. The contours of this melody seem to be infused with something as uniquely “Russian” as majestic onion domes. For example, compare this phrase with a similar melodic turn in Rimsky-Korsakov’s Procession of the Nobles, or the final movement of Tchaikovsky’s “Little Russian” Symphony, or the opening of Borodin’s Second Symphony, or something similar roughly 44 seconds into the soaring finale of Stravinsky’s The Firebird. This Promenade theme returns throughout the suite, moving us along from one scene to the next. What is especially interesting is the way this theme changes emotionally in response to the experience of the art- sometimes expressing a sense of quiet contemplation, other times stepping forward with determination and exuberance. Near the end of the suite, listen to the way mystery and a hint of terror melt into peaceful catharsis. So much of the magic of “Pictures” can be found in these “in-between” moments.

The first movement, The Gnome, is a snarling dramatization of “a sketch depicting a little gnome, clumsily running with crooked legs.” In this passage, listen to the way Ravel transforms the strings into ghostly, weaving strands of sound.

In the second movement, The Old Castle, a lamenting saxophone solo captures the distant, long-forgotten sounds of a troubadour singing in a medieval castle. A rocking rhythmic ostinato suggests an old dance rhythm, but here it is heard as a haunting echo.

Next, we find ourselves in a much different scene. In Tuileries, the avenue in the garden of the Tuileries is filled with the cheerful frivolity of children. Amid teasing and taunting, we hear the calm voice of the nurses who look after the children.

This leads into Bydło, “A Polish cart on enormous wheels, drawn by oxen.” Unlike Mussorgsky’s original version, Ravel gives us a sense of the lumbering oxen emerging and then passing off into the distance once again.

From the weight of Bydlo‘s ox cart, we move to a chirping Ballet of Unhatched Chicks, “Hartmann’s design for the décor of a picturesque scene in the ballet Trilby.” The movement can be heard as a vague caricature of the blocky two-bar phrases of some light, frilly, nineteenth century ballet score.

“Samuel” Goldenberg und “Schmuÿle”‎ is a portrait of two Jewish men, one rich and wrapped in a fur coat, the other poor. The harmony slips into Jewish modes, such as the Phrygian dominant scale. As the movement progresses, the two portraits interlock, as if in conversation. One of the most distinctive voices in this movement is a piercing, obsessively-repeating statement in the trumpet.

Next we enter a Market scene in which we hear “French women quarrelling violently.”

The eighth movement is set in the haunting darkness of the Catacombs, mysterious and eternal underground Roman tombs.

The ninth movement, The Hut on Hen’s Legs (Baba Yaga) is one of the suite’s most violently exhilarating. Baba Yaga is a Russian folktale involving a ferocious, supernatural creature with the face of a deformed woman. Her hut, deep in the woods stands on chicken legs. Hartmann drew a design for a clock based on the hut. Swirling scales in Mussorgsky’s music suggest Baba Yaga’s whirlwind flight in a mortar and pestle, a part of the folktale.

Just as the music reaches its frenzied peak, we enter the final movement, The Great Gate of Kiev, Hartmann’s monumental but never-built design for a grand gate honoring Alexander II. The second theme intones a Russian Orthodox chant. Before the mighty movement’s conclusion, the Promenade theme returns one last time, sparkling with splashes of shimmering color which are pure Ravel.

Here is Georg Solti’s legendary recording with the Chicago Symphony, featuring longtime principal trumpet player Adolph “Bud” Herseth. This clip features a 1991 live performance with the Chicago Symphony, along with rehearsal clips and Solti’s insights into the music. Now that we’ve outlined Mussorgsky’s inspiration for Pictures at an Exhibition, I encourage you to forget about the artwork and just listen to the music. Mussorgsky’s dramatic suite, heard through the sonic opulence of Ravel’s masterful orchestration, is strong enough to stand on its own:

A Showpiece in Multiple Versions

Pictures at an Exhibition is most often heard in Ravel’s orchestral arrangement, commissioned by Serge Koussevitzky in 1922, but there are many other orchestrations. Our experience of the piece can change dramatically through these other versions. First, let’s start by going back to Mussorgsky’s original piano suite. This is Sviatoslav Richter’s 1958 recording:

Here are samples of other orchestrations:

4 thoughts on “Mussorgsky’s “Pictures at an Exhibition”: A Showpiece in Multiple Versions”