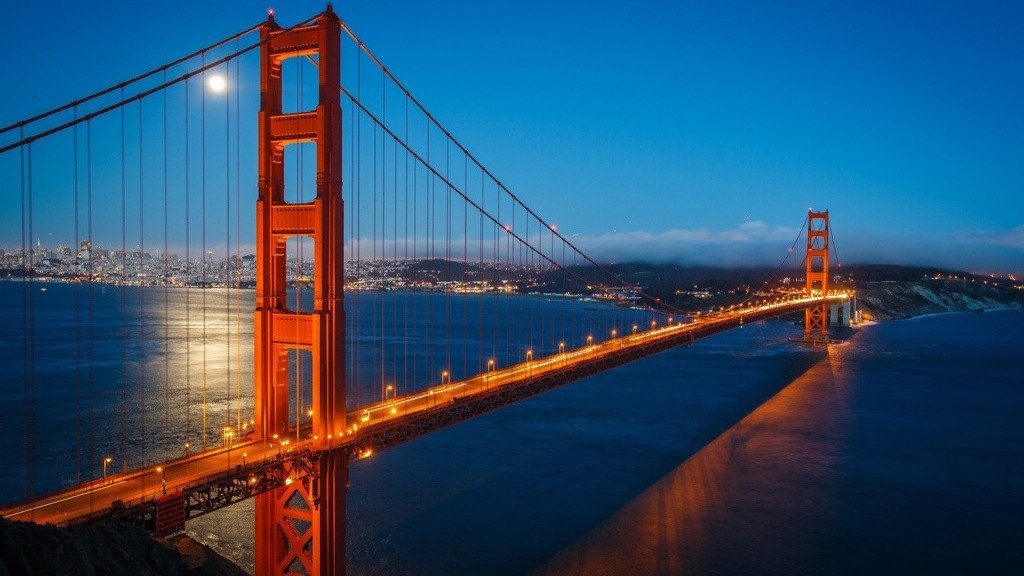 So begins John Adams’ monumental 1985 symphony in three movements, Harmonielehre. This titanic opening statement, which Adams has equated to “a grinding of gears,” sprang from a strange and vivid dream. For Adams, it brought a sudden end to a “perplexing and deeply disturbing creative block” which had paralyzed him for eighteen months. In his autobiography, Hallelujah Junction, the composer writes,

At what seemed like the absolute nadir of my creative block I’d had a vivid dream in which I was crossing the San Francisco Bay Bridge. In that dream I looked out to see a huge oil tanker sitting in the water. As I watched, it slowly rose up like a Saturn rocket and blasted out of the bay and into the sky. I could see the rust-colored metal oxide of its hull as it took off. Shortly after, possibly the very next day, I sat down in my studio to find, almost as if they were waiting for me, the powerful pounding E-minor chords that launch the piece. From there it proceeded to take shape with great speed, almost as if the floodgates had been opened and nearly two years of pent-up energy and ideas came rushing forth.

The title, Harmonielehre, which translates from German as “study of harmony,” is a reference to a treatise written by Arnold Schoenberg in 1911. (The text was dedicated to the memory of Mahler, who died the same year). Ironically, by this time Schoenberg was moving away from tonality, developing the twelve-tone techniques which would dominate twentieth century music. In Hallelujah Junction, Adams describes his complex relationship with the legacy of Schoenberg, who died in 1951:

Like a brooding, egocentric father, impossible to please, he loomed in my consciousness, sometimes as the embodiment of a mercurial creative force and other times as a Lethal defoliant, ready to kill off any and all sprouts of life that might appear in its immediate range.

In some ways, those monolithic E minor chords can be heard as a bold reaffirmation of tonality, which roared back to life through the minimalism of the 1970s. With its strong, satisfying pulse and gradual, time-altering development, Harmonielehre is firmly rooted in minimalism. But against this backdrop emerge some surprising echoes of the past. Adams writes,

Harmonielehre is parody of a different sort in that it bears a “subsidiary relation” to a model (in this case a number of signal works from the turn of the century like [Schoenberg’s] Gurrelieder and the Sibelius Fourth Symphony), but it does so without the intent to ridicule. It is a large, three-movement work for orchestra that marries the developmental techniques of Minimalism with the harmonic and expressive world of fin de siècle late Romanticism. It was a conceit that could only be attempted once. The shades of Mahler, Sibelius, Debussy, and the young Schoenberg are everywhere in this strange piece. This is a work that looks at the past in what I suspect is “postmodernist” spirit, but, unlike Grand Pianola Music or Nixon in China, it does so entirely without irony.

In the first movement, listen to the way the voices of the orchestra come alive, creating a vibrant, shimmering tapestry of color. Gradually, the exhilarating sense of pulse dissolves into a more serene soundscape, opening the door to a soaringly expansive, yet endlessly searching, melody. Around the 10:40 mark, there are strands of late Mahler. A few moments later, we find ourselves floating through a majestic sea of  Wagnerian chromaticism. There are striking similarities to this equally Wagnerian passage from the beginning of Schoenberg’s Gurrelieder.

The second movement, The Anfortas Wound, enters the gloomy darkness of Sibelius’ Fourth Symphony. At the movement’s climax, there is an allusion to the shrieking, virtual tone cluster (akin to placing both fists on the piano keyboard) of Mahler’s unfinished Tenth Symphony.

Adams offers this description of the movement:

At the time (1984—85) I was still deeply involved in the study of C. G. Jung’s writings, particularly his examination of Medieval mythology. I was deeply affected by Jung’s discussion of the character of Anfortas, the king whose wounds could never be healed. As a critical archetype, Anfortas symbolized a condition of sickness of the soul that curses it with a feeling of impotence and depression. In this slow, moody movement entitled “The Anfortas Wound” a long, elegiac trumpet solo floats over a delicately shifting screen of minor triads that pass like spectral shapes from one family of instruments to the other. Two enormous climaxes rise up out of the otherwise melancholy landscape, the second one being an obvious homage to Mahler’s last, unfinished symphony.

Regarding the final movement, Meister Eckhardt and Quackie, Adams writes,

The Zappaesque title refers to a dream I’d had shortly after the birth of our daughter, Emily, who was briefly dubbed “Quackie” during her infancy. In the dream, she rides perched on the shoulder of the Medieval mystic, Meister Eckhardt, as they hover among the heavenly bodies like figures painted on the high ceilings of old cathedrals.

The serene, childlike innocence of the opening bars captures this dream image- perhaps a distant allusion to ultimate peace of the final movement of Mahler’s Fourth Symphony. The music moves beyond this initial “cradle song,” concluding with “a vast harmonic struggle” between the keys of E and E-flat major. Adams has called the euphoric ultimate resolution “a buffalo herd in E-flat major.” This harmonic “duel” is foreshadowed in the final movement of Adams’ 1983 electronic work, Light Over Water.