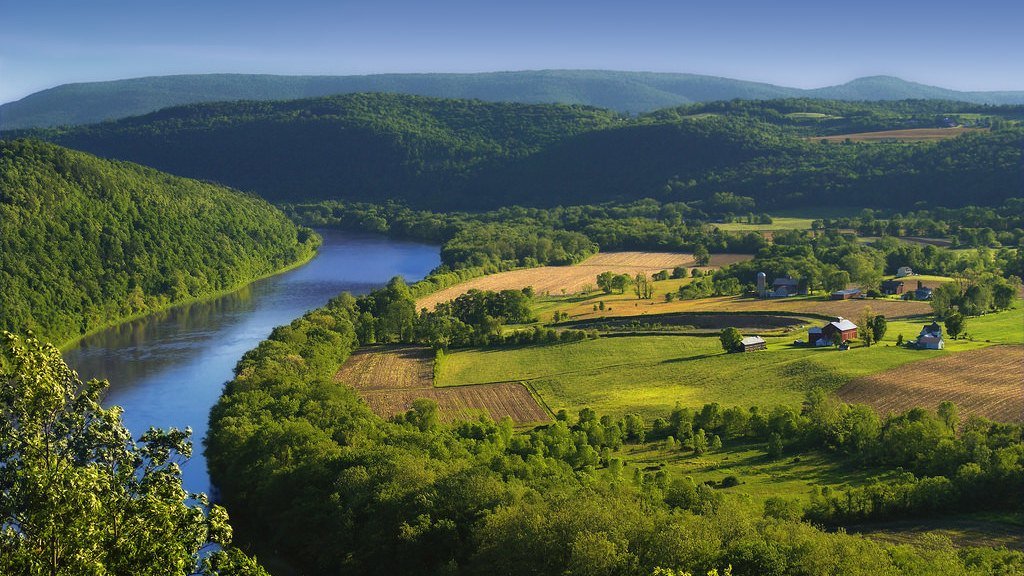 O Appalachian Spring! I gained the ledge;
Steep, inaccessible smile that eastward bends
And northward reaches in that violet wedge
Of Adirondacks!

– Hart Crane, The Bridge: The Dance

Aaron Copland’s Appalachian Spring is usually heard in its concert suite form for full orchestra. (Leonard Bernstein’s 1982 recording with the Los Angeles Philharmonic remains one of my favorite performances of the suite). But the 1944 ballet, written for Martha Graham, was originally a more intimate chamber work, scored for thirteen instruments. There is music in the original score, written to serve the choreography, which was cut from the suite.

Here is one of those passages. It comes from the final quarter of the ballet. Listen to the way a single musical idea is passed between groups of instruments which come alive in a vigorous conversation. Then, we drift into a quietly contented ostinato. The Shaker melody, Simple Gifts, emerges as the sleepy ostinato continues, and for a moment the music seems to be moving in two separate, unrelated directions, simultaneously.

In this excerpt from a 1959 performance of the complete ballet featuring Martha Graham, you can hear the way the music above evokes the young pioneer bride’s fears as she anticipates the challenges ahead on the American frontier. It’s a brief moment of terror which ultimately fades into reassurance amid Appalachian Spring’s American sense of optimism: the building of a new house on the nineteenth century frontier, the sustenance of the land, and the eternal rejuvenation of spring.

Martha Graham suggested the title, inspired by a poem from Hart Crane’s collection, The Bridge, only after Copland finished the writing the music. Crane’s “spring” refers to a stream of water rather than the season. Listeners who hear flowering Appalachian landscapes in the music are superimposing their own ideas. Still, Appalachian Spring has a distinct atmosphere and persona. In this 1974 clip, in which Copland rehearses the Columbia Chamber Orchestra in preparation for the first recording of the original version, the composer articulates the spirit of the piece. In the gradually-awakening opening he asks for “a soft, warm sound without any sense of effort” along with “a noncommittal clarinet sound.” Later, he strips the sound of any hint of false sentimentality, instead favoring a cool, honest sincerity. The faster sections sparkle with the light buoyancy of dance.

Here is a more recent recording of the complete original ballet score, featuring Andrew Schenck and the Atlantic Sinfonietta:

Photograph by Nicholas A. Tonelli