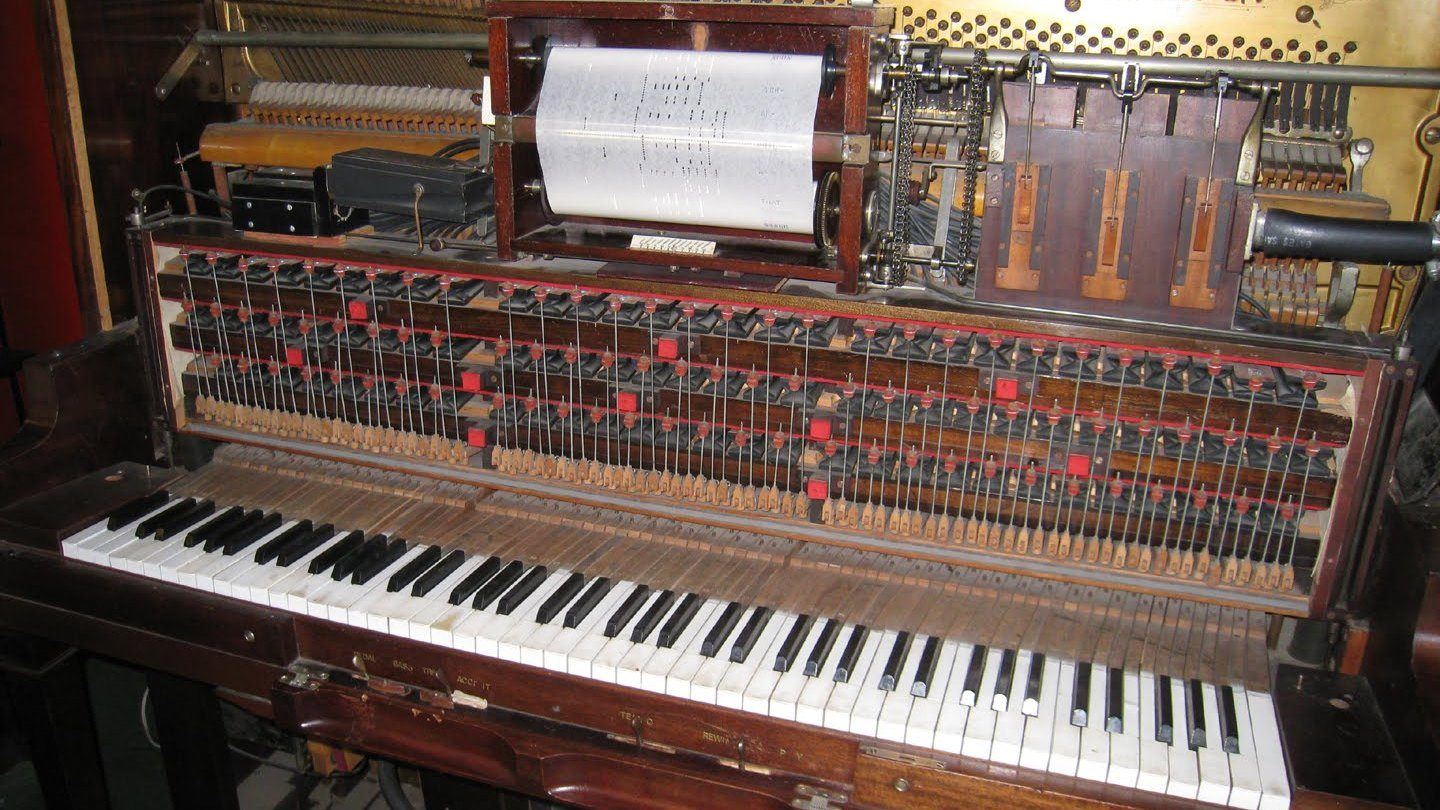 “The main business of humanity is to do a good job of being human beings,” said Paul, “not to serve as appendages to machines, institutions, and systems.”

I foresee a marked deterioration in American music and musical taste, an interruption in the musical development of the country, and a host of other injuries to music in its artistic manifestations, by virtue -or rather by vice -of the multiplication of the various music-reproducing machines.

On Monday, we heard a sample of piano roll recordings made by famous composers in the early years of the twentieth century. In the days before radio and high fidelity recordings, the player piano (or pianola) brought mass-produced recorded music into homes.

A number of composers wrote music specifically for the pianola. Perhaps the most prolific and daring was the American-Mexican composer Conlon Nancarrow (1912-1997). In the late 1930s, just as radio and phonograph were driving it to obsolescence, Nancarrow began composing almost exclusively for the Ampico reproducing player piano. The music which emerged was so rhythmically complex and dense that it could only be played by a machine. Listening to Nancarrow’s music, I’m reminded of the free-wheeling, experimental spirit of Henry Cowell. Studies for Player Piano, Vol. I and II is built on the blues. The 20th study seems to anticipate the early minimalism of Terry Riley’s In C.

In 1917, the Aeolian Company commissioned Igor Stravinsky to write Étude pour Pianola. The company wanted to showcase the new dynamic possibilities of the player piano:

A diabolical fugue takes over in Paul Hindemith’s 1926 Toccata for Player Piano. This exhilarating music might give you the sense of a runaway, unstoppable technology:

The germinating idea behind Century Rolls was an experience I had late one night listening to a recording of old piano roll music from the 1920s. I was struck in an unexpected way by the fact that, regardless of the performer or the repertoire–be it Gershwin or Rachmaninoff, Jelly Roll Morton or Paderewski–the technology of the piano roll transformed the music into a realm that could not have been anticipated before what Walter Benjaman called the “age of mechanical reproduction.”…The last movement, “Hail Bop” (so named in honor of my misapprehension of the name of last year’s comet, Hale-Bopp) is a kind of homage to Nancarrow’s peculiarly whimsical way of wedding American vernacular music to a spiky, disjunct rhythmic texture.

Here is that frenetic and exhilarating final movement, performed by Emanuel Ax:

In some ways, the player piano is the direct descendant of today’s MIDI sequencers and electronic music. John Adams’ 1992 album, Hoodoo Zephyr, celebrates this technology with great relish. The album’s second track, Disappointment Lake, evokes a haunting Western landscape- perhaps the desolate stillness of a long-abandoned mining town. Suddenly, the silence is broken by the strident sounds of a saloon player piano: