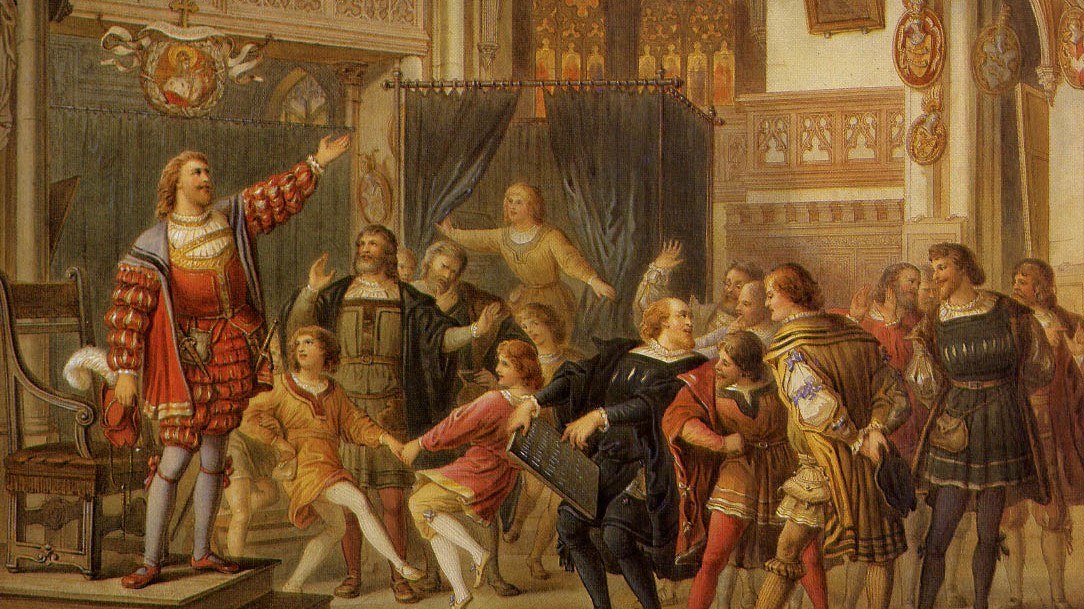 Tomorrow marks the 205th anniversary of the birth of Richard Wagner (1813-1883). In celebration, let’s listen to a classic recording of the Overture to Wagner’s 1868 opera, Die Meistersinger von Nürnberg, by Herbert von Karajan and the Berlin Philharmonic.

Die Meistersinger is one of Wagner’s later works, completed after Tristan and Isolde and between operas of the Ring Cycle. It’s something of an outlier in Wagner’s output- a comic love story in which no one dies and there are no supernatural characters or magic spells. The opera’s themes encompass the role of art in society and the conflict between tradition and new ideas. The plot involves an annual singing contest and a guild of musicians and poets dedicated to the rules of their craft. Eva, the daughter of a goldsmith, and the knight, Walther, fall in love at first sight. But Eva’s father has promised her hand in marriage to the winner of the singing contest. In the opera, the final bars of the Overture, set with majestic fanfares in the brass, lead directly into the first act. As a church service is concluding, Eva and Walther first catch sight of one another. In between chorale phrases, their newfound love comes to life in fleeting duets in the orchestra.

The exhilarating counterpoint and nobility of Wagner’s Overture sets the stage for the four and a half hour drama which follows. This performance is filled with an incredible raw, searing power which moves far beyond the “careful” or “clinical.” There’s a mysterious, intangible presence in the sound. It’s music filled with comedy as well as soaring euphoria: