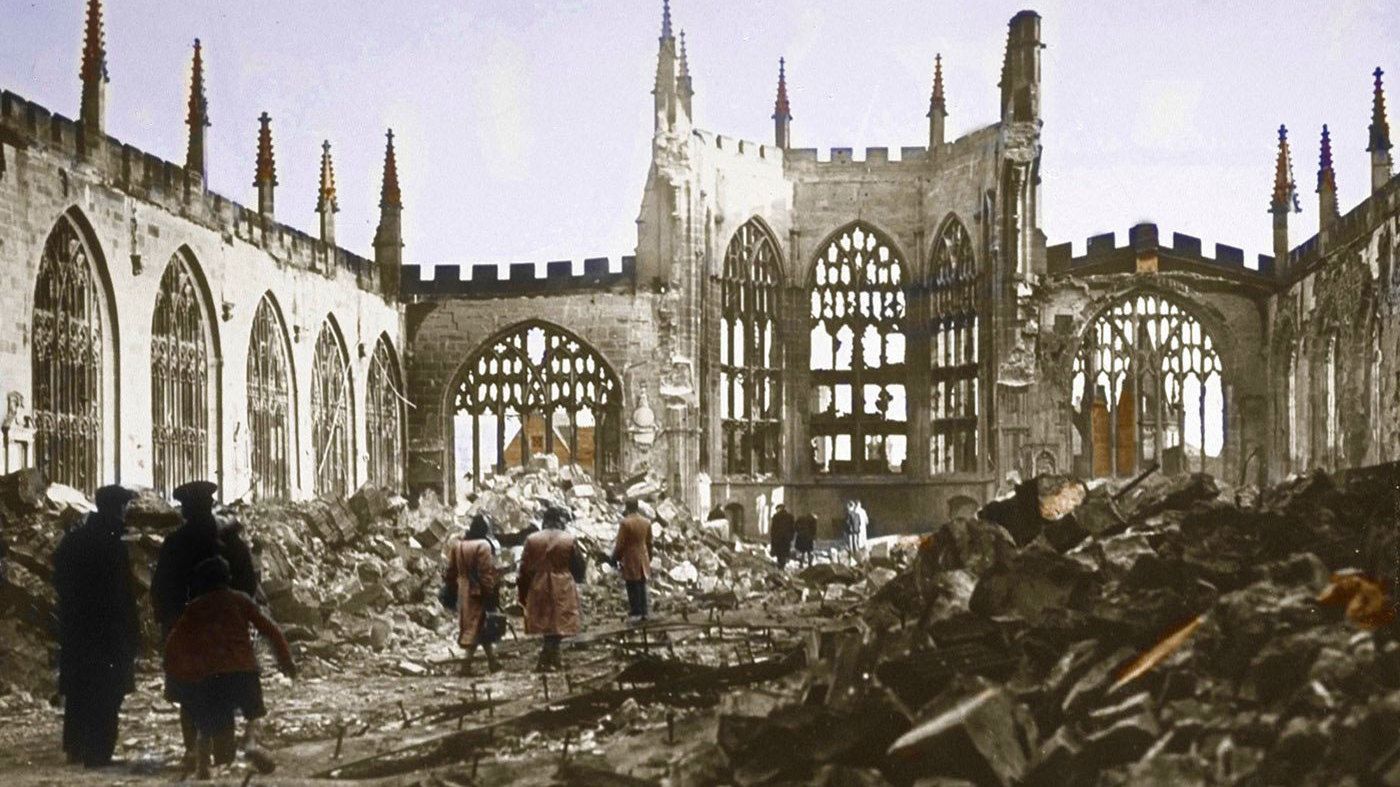 In observance of Memorial Day, here is the final segment of Benjamin Britten’s War Requiem.

One of the defining works of the twentieth century, the War Requiem combines the traditional Latin Mass for the dead with nine poems written by Wilfred Owen in the trenches of the First World War. It was premiered on May 30, 1962 on the occasion of the consecration of the new Coventry Cathedral. The original fourteenth century structure (pictured above) was almost completely destroyed by German Luftwaffe bombing on the night of November 14, 1940. Completed only a few months after the Cuban Missile Crisis, Britten’s War Requiem confronts a dark and uniquely modern reality- the possible sudden and catastrophic annihilation of the human race. It reflects Britten’s lifelong dedication to pacifism.

Just before the first performance, William Mann wrote in The Times of London,

Any new Requiem setting has to compete with Verdi’s and Faure’s and Mozart’s treatment of the same words. Britten has approached the task in his own fresh and deeply felt way. It is not a Requiem to console the living; sometimes is does not even help the dead to sleep soundly. It can only disturb every living soul, for it denounces the barbarism more or less awake in mankind with all the authority that a great composer can muster. There is no doubt at all…that it is Britten’s masterpiece.

The monumental scale of this music gives us a sense of the spacial dimension of sound. A full orchestra and organ accompany the soprano soloist and main chorus. A chamber orchestra accompanies the baritone and tenor soloists. Set in the distance is a boys’ choir, accompanied by a small organ. These vast forces merge together in the final movement.

In the opening of Libera me we hear the haunting drums of a desolate battlefield as a defiant, lamenting chorus intones the Latin text, “Deliver me.” After surging to an apocalyptic climax, the music sinks into the deepest, loneliest despair and alienation. There are echos of a distant battlefield bugle. We’re left with the final lines of Owen’s Strange Meeting:

I am the enemy you killed, my friend.
I knew you in this dark: for so you frowned
Yesterday through me as you jabbed and killed.
I parried; but my hands were loath and cold.
Let us sleep now. . . .

The In paradisum awakens gradually with shimmering, angelic colors which grow into a crescendo of transcendence. Yet, in the final moments we’re quietly confronted again with the dissonance of the tritone- an interval which runs persistently through the War Requiem. There is no hint of celebration in the final bars- only meditation.