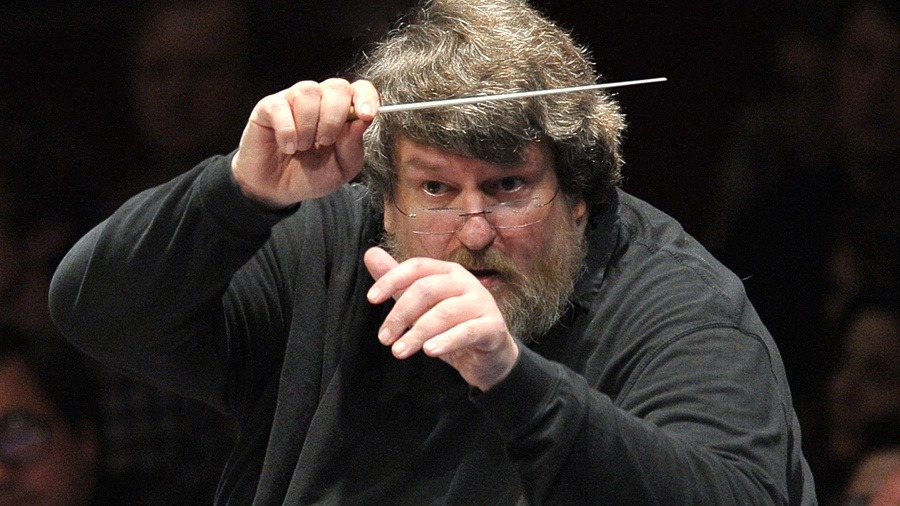 Oliver Knussen, the influential British composer, conductor, and teacher passed away last Sunday. He was 66.

As a conductor and teacher, Knussen will be remembered for his associations with Tanglewood (where he served as head of contemporary music activities between 1986 and 1993), the Aldeburgh Festival, the London Sinfonietta, and the BBC Symphony Orchestra, among other organizations. In a 2005 San Francisco Chronicle interview, Knussen talked about his life in music, including his aversion to composing up against deadlines.

Earlier in the week, renowned contemporary music conductor and composer Brad Lubman recalled his association with Oliver Knussen in a Facebook tribute. As a student at the Eastman School, I was fortunate to play frequently under Lubman’s baton. He granted permission for a reprint of his eloquent tribute here:

Thinking back on many wonderful things about Oliver Knussen:

He had this incredible knack for being able to say two or three things to an orchestra or ensemble after only playing a few minutes at the first rehearsal, that would then enable the orchestra to understand exactly what would make things sound immediately better. He would make just a few comments and the orchestra would then grasp the style and then proceed to polish and refine things right away. With clear, precise, and musical rehearsal technique and baton technique, Olly would achieve the greatest results. It was a miracle to watch, especially with the fellows of the Tanglewood Music Center Orchestra; he would get the most amazing results in no time at all.

He would look through any score and be able to sum up what the piece was about, where the trickier parts might be, what would need more rehearsal time, what would come together easily…..he just seemed to be able to know everything at just a glance.

He was able to objectively guide a young composer to find ways in which said composer could find their voice, or become themselves. He did this with the greatest amount of support and enthusiasm, always maintaining the most positive atmosphere.

He had a way of finding the most interesting connections amongst the greatest variety of repertoire, or disparate groups of composers, he would find new ways of looking at things, different ways to perceive things, different aspects to learn or discover. His insatiable curiosity for discovery was infectious.

He had multitudes of great stories, always intriguing, amusing, and humorous.

He could hear anything and everything in any musical texture. Astounding ears!

His wrote music which is utterly mesmerizing, made from the most carefully wrought jewel-like textures, filled with magic, child-like wonder, and the most amazing colors, the most wondrous things you could imagine.

Oliver Knussen collaborated with Maurice Sendak on two one-act fantasy operas, Where the Wild Things Are (1983), and Higglety Pigglety Pop! (1985). In a 1990 Los Angeles Times interview, Knussen observed that the “advanced” harmonic language of the works were more readily accepted by children than some adults.

Here is the first Sea Interlude from Where the Wild Things Are- perhaps a nod to Knussen’s early mentor, Benjamin Britten:

Prayer Bell Sketch for solo piano was written in three days following the 1996 death of the Japanese composer, Toru Takemitsu. The elegy ventures into the hazy atmospheric sound world Takemitsu frequently inhabited. As with the final bars of Where the Wild Things Are, the concluding moments of this piece seem to evaporate suddenly.

Here is the haunting second movement, Aria, of Knussen’s Violin Concerto, written during the winter of 2001 and spring of 2002 for Pinchas Zukerman and a joint commission between the Pittsburgh Symphony and Philadelphia Orchestra.

The voices of the orchestra spring to life as “wild things” and embark on an adventure-filled romp in Knussen’s Third Symphony, completed in 1979. In its final moments, this fifteen-minute-long symphony moves into more sombre territory- something akin to the lengthening shadows and fading light of late afternoon: