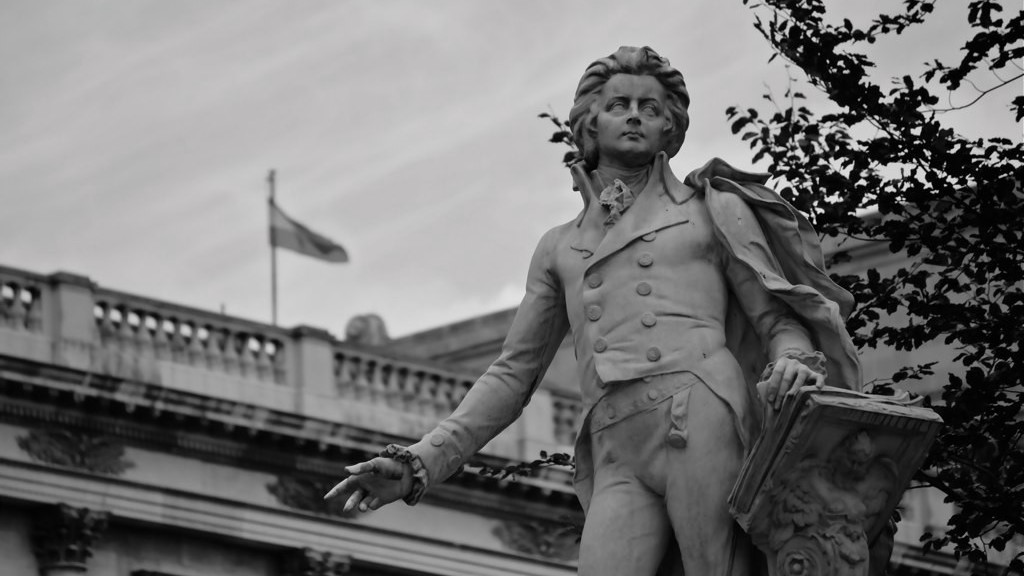 Mozart wrote 41 numbered symphonies. Of these, only two are rooted in a minor key- in both cases G minor. The first is the exuberant, fiery Symphony No. 25, which we heard last week. The second and more famous is the “Great” G minor Symphony No. 40.

Last Friday’s post inspired me to consider the uniquely tragic significance of G minor throughout Mozart’s music. This is the key to which Mozart turns in the second act of his opera, The Magic Flute, for Pamina’s aria, “Ach, ich fühl’s” (“Oh, I feel it”).  When she tries to speak to Tamino he doesn’t answer. Not realizing that he is bound by a vow of silence, she believes that Tamino no longer loves her. The aria is Pamina’s quiet, solitary lament. Notice the interjections in the woodwind instruments, especially the gloomy darkness of the bassoon. If the ever-quickening heartbeat is the vibrant, exhilarating evocation of romantic passion, here Mozart gives us the opposite. As Pamina’s soliloquy fades into contemplation, the sombre heartbeat heard throughout the aria in the strings becomes a dying heartbeat:

A similar sense of melancholy can be heard  in Mozart’s haunting String Quintet No. 4 in G minor. The first movement’s opening theme is filled with downward, slithering chromatic lines. A wordless operatic drama unfolds as the instruments enter into a lamenting conversation, sometimes (as in this passage from the development section) interrupting one another with increasing passion and intensity. The final cadence is a stern affirmation of G minor. There is no relief from G minor, with its turbulent darkness, in the opening of the second movement. With jagged, angry interruptions, it’s a minuet which seems to be doing everything possible to be an “anti-dance.” Regarding the third movement Tchaikovsky said,

No one has ever known as well how to interpret so exquisitely in music the sense of resigned and inconsolable sorrow.

It is only with the final movement that the music finally escapes the gloomy shadows of G minor and moves into the sunlight. It’s an abrupt and unexpected G major turn which offers a sense of giddy emotional release from one of Mozart’s most grim and tragic works.

A year after completing the Fourth String Quintet, Mozart wrote the famous Symphony No. 40 in G minor. Coincidentally, today marks the exact date Mozart entered the completed 40th Symphony into his catalogue: July 25, 1788. This work is part of the sublime trilogy of Mozart’s final three symphonies, seemingly written as much for posterity as for any particular concert. In fact, it’s possible that Mozart never heard any of the final three symphonies performed, although it is believed that Antonio Salieri (who didn’t actually poison Mozart) led a performance of Symphony No. 40 in Vienna on April 16, 1791.

One of the most amazing and, at the time, rule-breaking aspects of this piece is the way it begins. First we hear a quiet, rhythmic “motor.” This sets the stage for a restless, searching and pathos-filled melody. What follows is music filled with strange dissonances which moves in new, adventurous directions. The pianist and writer Charles Rosen called it

something shockingly voluptuous. Nor does this detract from its power or effectiveness: the grief and the sensuality strengthen each other.

Listen to the way fragments of that opening theme are tossed between instruments. Also, following the development section’s intense drama and turmoil, listen to the the sly way we slide back into the recapitulation.

As with the Fourth String Quintet, the 40th Symphony is obsessively centered in G minor to its final bars. Boston Symphony annotator Steven Ledbetter describes “the unrelieved ‘minor-ness’ of the symphony.” The exception is the Andante second movement which moves into major. But here, too, we have a sense of the transcendent. Listen to the way the elegant falling motives in the opening are later transformed into this bold, heroic statement.

I mentioned, earlier, that this is music filled with surprise. One of the most explosive surprises comes at the beginning of the final movement’s development section. It’s a ferocious moment which anticipates the brash, revolutionary sounds of Beethoven. Following the strings’ outburst, listen to the way the woodwinds react, as if meekly attempting to pick up the shattered pieces. The Finale’s final cadence leaves us with the tragic intensity of Mozart’s G minor.

2 thoughts on “Mozart and the Tragic Key of G Minor”