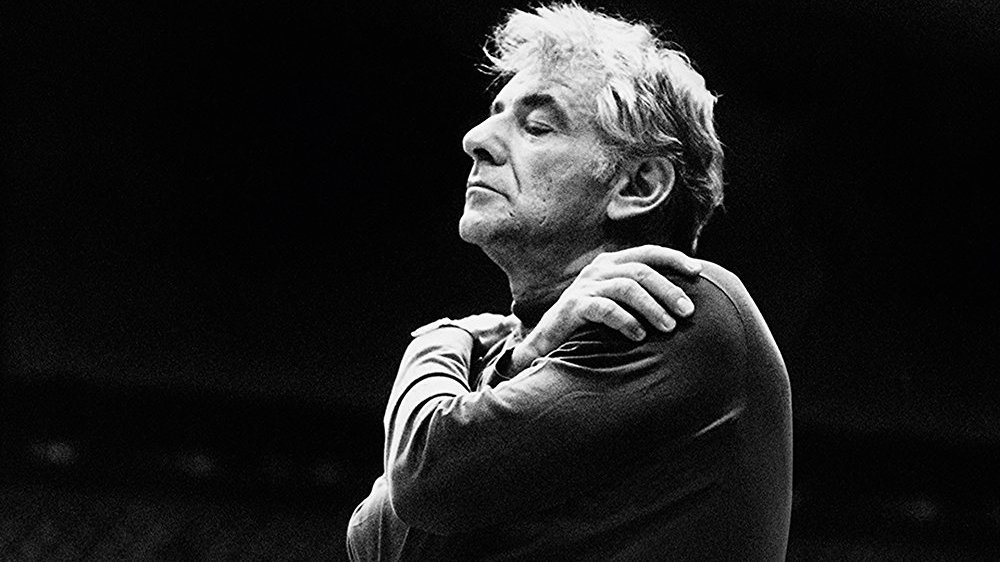 This month, we celebrate the centennial of the birth of Leonard Bernstein. Born on August 25, 1918, Bernstein was a uniquely energetic and multi-faceted figure- a bold and inventive conductor dedicated to adventurous, American programming during his tenure as music director of the New York Philharmonic, a composer who seemed to be trying to wrap his arms around the entire Western musical canon from Mahler to Ives, a passionate teacher and communicator who could demystify the most complicated music without a hint of condescension. Others have tried to step into Bernstein’s shoes as an ambassador of music education, but no one has harnessed the power of mass media with quite the same level of dynamism or authority.

Today, we’ll explore a piece which Bernstein considered to be his greatest concert work- the five-movement Serenade, after Plato’s Symposium for solo violin, strings and percussion. Completed in 1954 on a commission by the Koussevitzky Foundation, and premiered in Venice with Isaac Stern and the Israel Philharmonic, the Serenade is a violin concerto in all but name. It is inspired by Plato’s Symposium, a philosophical text from around 385–370 BC on the nature and purpose of love. The text depicts a series of extemporaneous speeches by Greek philosophers in praise of Eros, given during a banquet. Each movement is dedicated to a speaker (Phaedrus, Aristophanes, Eryximachus, Agathon and Socrates).

The music develops with a sense of continuous variation, giving us a sense of each speaker picking up where another left off, debating points, and moving the discussion in new directions. Bernstein wrote,

The music, like the dialogue, is a series of related statements in praise of love, and generally follows the Platonic form through the succession of speakers at the banquet…[The work’s development] does not depend on common thematic material, but rather on a system whereby each movement evolves out of elements in the preceding one.

Despite Bernstein’s detailed program notes which detail the musical links to the five philosophical speeches, the biographer Humphrey Burton has suggested that the composer may have superimposed these direct references onto the piece following its completion. He cites discrepancies between Plato’s text and Bernstein’s dramatization. Perhaps this distance from the literal text only makes the work stronger. Regardless, embedded in the Serenade are personal statements of Bernstein’s love for his friends in the form of the Anniversaries– brief piano compositions written as musical birthday cards.

Bernstein was in the midst of a flurry of composition in the summer of 1954. He had just finished Wonderful Town (1953). While working on the Serenade, he was busy with Candide(1956) and West Side Story (1957). The film score for On the Waterfront was completed in 1954. One of the most distinctive qualities of Bernstein’s music is the way all of these influences, from Broadway to Mahler, come together in a great, exuberant melting pot. In the Serenade, we hear hints of the over-the-top, mixed-meter energy of Bernstein’s Broadway music. Listen carefully in the first measure, and you’ll hear the three-note, resolved tritone of West Side Story‘s Maria.

In the Symposium, Plato writes,

Love is simply the name for the desire and pursuit of the whole.

Perhaps Bernstein the composer attempts to wrap his arms around the world of music- everything from jazz to Mahler- to find a similar “whole.”

1 thought on “Bernstein at 100: “Serenade, after Plato’s Symposium””