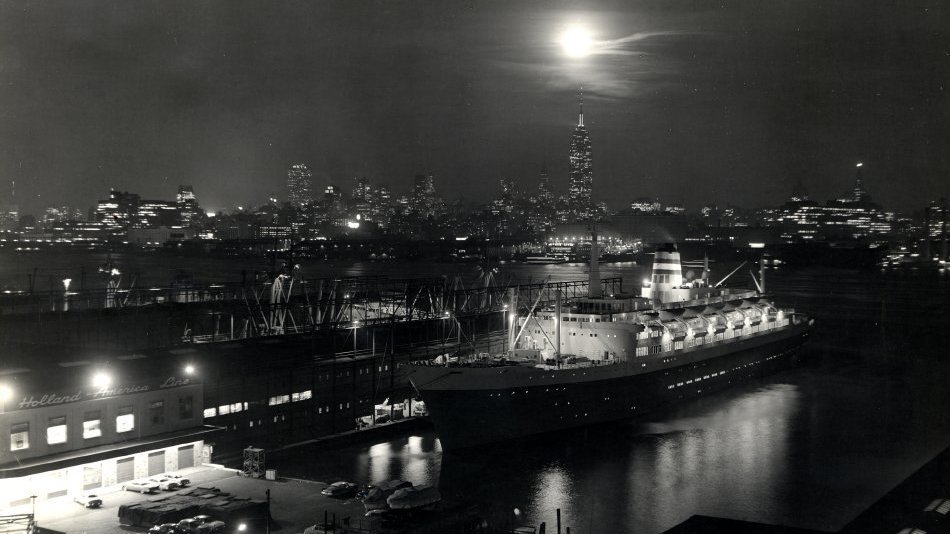 The 1954 American crime drama, On the Waterfront, starring Marlon Brando, is set amid the union violence and corruption of longshoreman working on the docks of the Hoboken, New Jersey waterfront. The film, directed by Elia Kazan and written by Budd Schulberg, was ranked the eighth-greatest movie of all time by the American film institute. It was Leonard Bernstein’s only foray into the world of Hollywood film scoring.

Bernstein found the collaborative nature of film scoring frustrating artistically. He was hired primarily because of his big name and the resulting promotional value. His score, which now stands at number 22 on the American Film Institute’s list of top American film scores, failed to win an Oscar, losing to Dimitri Tiomkin’s music for The High and the Mighty. Even after its release, the film’s creators worried that Bernstein’s music upstaged the dialogue. Kazan commented that it “put the picture on the level of almost operatic melodrama here and there.” In this interview, Jon Burlingame, a leading expert in the history of film music, discounts these criticisms and points out the ways in which Bernstein’s music sharpened the onscreen drama.

In his autobiography, The Joy of Music, Bernstein wrote,

I thought [the film] a masterpiece of direction; and Marlon Brando seemed to me to be giving the greatest performance I had ever seen him give … I was swept by my enthusiasm into accepting the commission to write the score, although I had resisted all such offers on the grounds that it is a musically unsatisfactory experience for a composer to write a score whose chief merit ought to be its unobtrusiveness.

In a May 30, 1954 New York Times article, while working on the score, Bernstein elaborated on the experience further:

I had become so involved in each detail of the score that it seemed to me perhaps the most important part of the picture. I had to keep reminding myself that it really is the least important part, that a spoken line covered by music is a lost line, and by that much a loss to the picture, while a bar of music completely obliterated by speech is only a bar of music lost, and not necessarily a loss to the picture. Over and over again I repeated this little maxim to myself ….

Sometimes there would be a general decision to cut an entire piece of music out of the picture because it seemed to “generalize” the emotional quality of a scene, whereas the director wished the scene to be “particularized.” Sometimes the music would be turned off completely for seconds to allow a line to stand forth stark and bare — and then be turned on again. Sometimes the music, which had been planned as a composition with a beginning, middle, and end, would be silenced seven bars before the end.

All of that unused music did, indeed, find new life a year later in the Symphonic Suite from “On the Waterfront.” Bernstein biographer, Humphrey Burton, has compared the way motives develop throughout the single-movement work to the thematic transformation of the tone poems of Franz Liszt. The suite opens as the film opens- not with the customary, voluptuous splash of Hollywood sonic glitter which Kazan sought, but with a lonely, lamenting statement in the solo horn. This noble “Dignity Theme” is followed by music which evokes the dark violence of the hellish Hoboken slums and, in contrast, the shimmering light of the Love Theme.

The Love Theme is first heard as a quietly tentative statement in the flute. It begins with the same upward-reaching minor seventh we hear in West Side Story‘s “Somewhere.” As the theme reaches its soaring climax, listen to the way it opens into a series of modulations, each bringing a vibrant, new orchestral voice (or combination of voices) to the forefront. At its highest point, the melodic line becomes a passionately mournful lamentation in the horns and strings- a combination reminiscent of the music of Ernest Bloch and other twentieth century Jewish composers.

In the final bars of the Suite, the Love Theme and the “Dignity Theme” combine. A concluding falling half-step motive, heard throughout the score, seems to foreshadow the upward-resolving tritone of West Side Story‘s “Maria.” As with West Side Story, On the Waterfront moves, ultimately, from darkness to transcendence.

“I coulda been a contender…”

The music which accompanies what is perhaps the film’s most famous scene is not heard in the Suite: