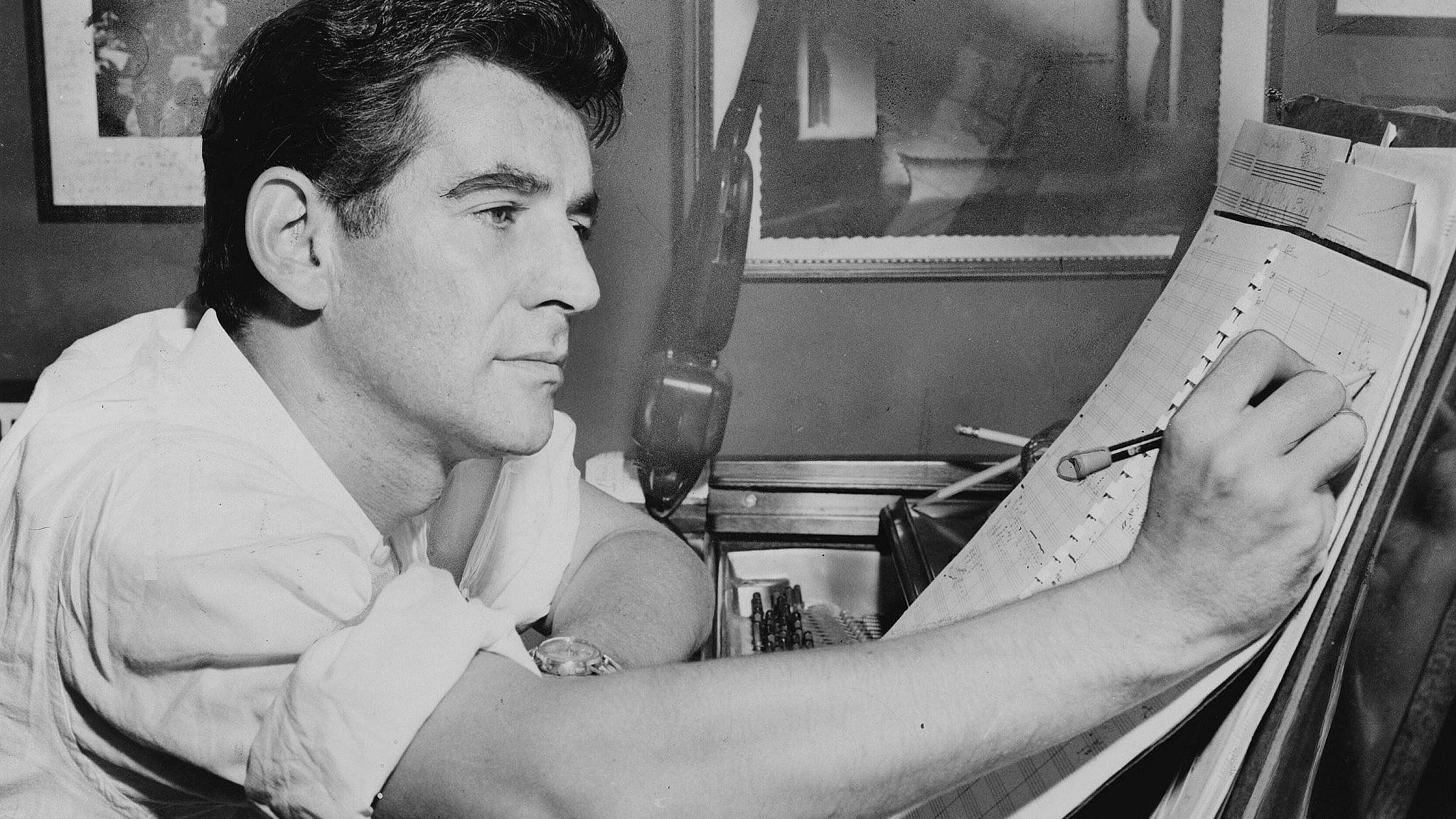 Tomorrow marks the centennial of the birth of Leonard Bernstein (1918-1990).

As a conductor, Bernstein brought a distinctive, youthful dynamism to the podium, producing performances which sizzled with “edge-of-your-seat” energy. He championed adventurous new American works during his tenure as music director of the New York Philharmonic (from 1958 to 1969), and sparked a revival of interest in the music of Gustav Mahler. As a composer, he synthesized a variety of musical styles, from classical to jazz, into an exuberant melting pot. As an educator, he harnessed mass media and an infectious passion for music to demystify the most thorny score or concept. He had the unique ability to communicate with audiences in a way which was always enthusiastic, sincere, respectful, and never stuffy or condescending.

It seems fitting that we finish the week with the music for which Bernstein is best remembered- West Side Story. The 1957 musical, with a book by Arthur Laurents, lyrics by Stephen Sondheim, and choreography by Jerome Robbins, undoubtedly changed the course of Broadway theater. It translates the Romeo and Juliet story to the streets of 1950s New York through the turf battles of two rival gangs- the Jets (White Americans), and the Sharks (Puerto Rican Americans).

Bernstein’s score develops symphonically, with recurring motives such as the augmented fourth (or tritone), sometimes dubbed the diabolus in musica (“the Devil in music”) because of its harsh dissonance. Throughout West Side Story, the tritone serves as a subtle reminder of the darkness underlying the story. It’s the first interval we hear in the opening Prologue. It returns prominently in “Maria” and “Cool.” It even opens each verse of the comically sardonic “Gee, Officer Krupke.”  If there is a motivic counterweight, it is the yearning sunlight of the expansive minor seventh, heard in “Somewhere” and “I Have a Love.”

It’s this dichotomy between darkness and light which forms the essence of West Side Story. The fleeting love of Maria and Tony spiritually transcends the hopelessness of the street violence which forms the backdrop of the tragedy. This is captured in Maria’s line in Tonight: “I saw you and the world went away…” Sondheim’s lyrics for Something’s Coming are filled with mysticism and breathless anticipation. (Notice the underlying tritone, even here). Tony has not yet met Maria, but he seeks transcendence from the gang world in which he is trapped. Later, his description of her name highlights its biblical allusions: “Say it soft and it’s almost like praying.” Through “One Hand, One Heart,” set in the bridal shop, Maria and Tony become “married” in a spiritual sense. Following the fatal stabbing of Bernardo at the end of the Rumble, Tony cries out in anguish, “Maria!” Having descended into the depths of hell, he seems to be seeking deliverance. This contest between darkness and light plays out in the final, fading bars of West Side Story, where we hear two competing keys, one representing the “Somewhere” motive in the shimmering upper strings, and the other in the depths of the orchestra. With this ambiguous conclusion, Bernstein makes a direct reference to the similar harmonic duality at the end of Richard Strauss’ Also sprach Zarathustra.

When it premiered in 1957, West Side Story stunned audiences. Stephen Sondheim has commented that the first audiences were disturbingly quiet and reverent until the vivacious America broke the ice. In the musicals of Rodgers and Hammerstein, songs furthered the drama rather than interrupting it, as in the “bench scene” from Carousel. With its symphonic score, West Side Story pushed this development further. Additionally, it brought moments of opera to the Broadway stage. One example is the Tonight Quintet, which resembles an operatic finale with multiple, competing characters singing simultaneously. Had it not been for the logistics of the scene change from The Rumble to the bridal shop, the Tonight Quartet would have been the first act’s finale. As it is, the first act concludes with The Rumble. The curtain falls with two bodies lying on the stage amid the solemn tolling of church bells. Considering its predecessors on Broadway, West Side Story‘s dark realism must have been jolting.

Bernstein’s Symphonic Dances from West Side Story capture the dramatic arc of the musical, from the explosive energy of the Mambo, to the “Cool Fugue,” slyly built on a twelve tone row, to the concluding funeral procession, and final glimmer of light. Here is Bernstein’s 1961 recording with the New York Philharmonic:

In Wednesday’s post, I pointed out the continuous, dramatic modulations at the climax of the Love Theme from Bernstein’s On the Waterfront. Something similar happens in “Tonight,” where each verse’s modulation seems to land in a magical new world. Even the melody of “Tonight” is built on soaring modulation. Listen to the way it pushes increasingly higher, giving us the sensation of floating in midair before quietly sliding back home. Interestingly, a motivic fragment from Bernstein’s Second Symphony “The Age of Anxiety,” written nearly ten years earlier in 1949, seems to anticipate the melody of “Tonight.”

Bernstein worked on West Side Story and the operetta, Candide, simultaneously. On some occasions, as with One Hand, One Heart, music originally intended for one work ended up in the other. Candide‘s Finale, “Make Our Garden Grow,” offers yet another example of transcendent and seemingly unending modulation between verses. You may hear echoes of the Finale of Stravinsky’s The Firebird, along with the final moments of Mahler’s Second Symphony. Listen to the way each modulation opens into a euphoric new world, which leads to the ultimate, transcendent cadence: