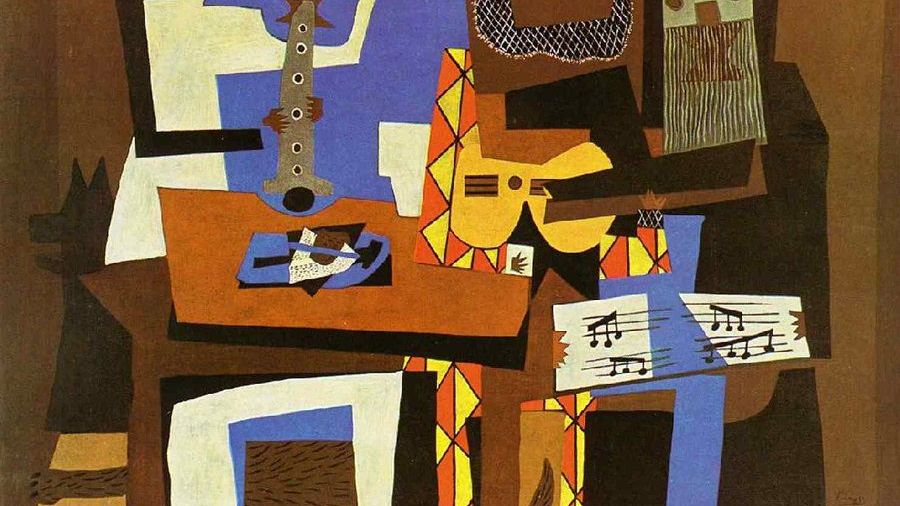 Earlier in the month, we listened to Leonard Bernstein’s 1949 Prelude, Fugue, and Riffs, a uniquely-American hybrid of classical music and jazz, written for Woody Herman’s big band. (Due to the band’s 1946 dissolution, Benny Goodman gave the piece’s premiere). This reminded me of the Ebony Concerto, a similarly jazz-inspired work written for Herman by Igor Stravinsky a few years earlier in 1945.

Stravinsky developed a fascination with jazz as early as 1916 when he said,

I know little about American music except that of the music halls…but I consider that unrivaled.  It is veritable art and I can never get enough of it to satisfy me…I am convinced of the absolute truth in the utterance of that form of American art.

Ragtime and jazz influences emerged in Stravinsky’s 1918 Faustian theatrical work, L’histoire du soldat (“The Soldier’s Tale”), as well as the 1919 Piano-Rag-Music. The composer reportedly admired the music of Art Tatum, Charlie Parker and the guitarist Charlie Christian. As music critic Alex Ross writes in his book, The Rest Is Noise: Listening to the Twentieth Century, the admiration was mutual:

Jazz musicians sat up in their seats when Stravinsky’s music started playing: he was speaking something close to their language. When Charlie Parker came to Paris in 1949, he marked the occasion by incorporating the first notes of the Rite into his solo on “Salt Peanuts.” Two years later, playing Birdland in New York, the bebop master spotted Stravinsky at one of the tables and immediately incorporated a motif from Firebird into “Koko,” causing the composer to spill his scotch in ecstasy.

You can hear a similar Rite of Spring quote (from the Augurs of Spring movement) in Parker’s recording Repetition, arranged by Neal Hefti.

Despite this musical cross-pollination between the prominent jazz musicians of the day and the Russian emigree Stravinsky, who was residing in sunny Hollywood, financial concerns seem to have been the real motivation for writing the Ebony Concerto. According to a 1986 Chicago Tribune article, the commission was arranged by Stravinsky and Herman’s mutual publisher, Leeds Music, as a way of helping the composer through some financial difficulties. Stravinsky was said to have been inspired by the Woody Herman Band’s recordings, including Bijou, Goosey Gander, and Caldonia. But it’s likely that this story was embellished. The band struggled with the difficulty of the Concerto, named for Africa and its association with the blues rather than Herman’s clarinet. According to Herman,

After the very first rehearsal, at which we were all so embarrassed we were nearly crying because nobody could read, he walked over and put his arm around me and said, ‘Ah, what a beautiful family you have.’

The three short movements of the Ebony Concerto are filled with an exhilarating sense of rhythm and a crazy, quirky, dialogue of voices. Listen to the distinct, soulful persona in each voice, from the mellow reeds to the foggy muted trumpets. As the final notes of the first movement intone their “Goodbye,” humor and sadness seem to meet.

We’ll conclude with one of those Woody Herman Band (known as “The First Herd”) recordings which may or may not have inspired Stravinsky. Here is Goosey Gander from 1945: