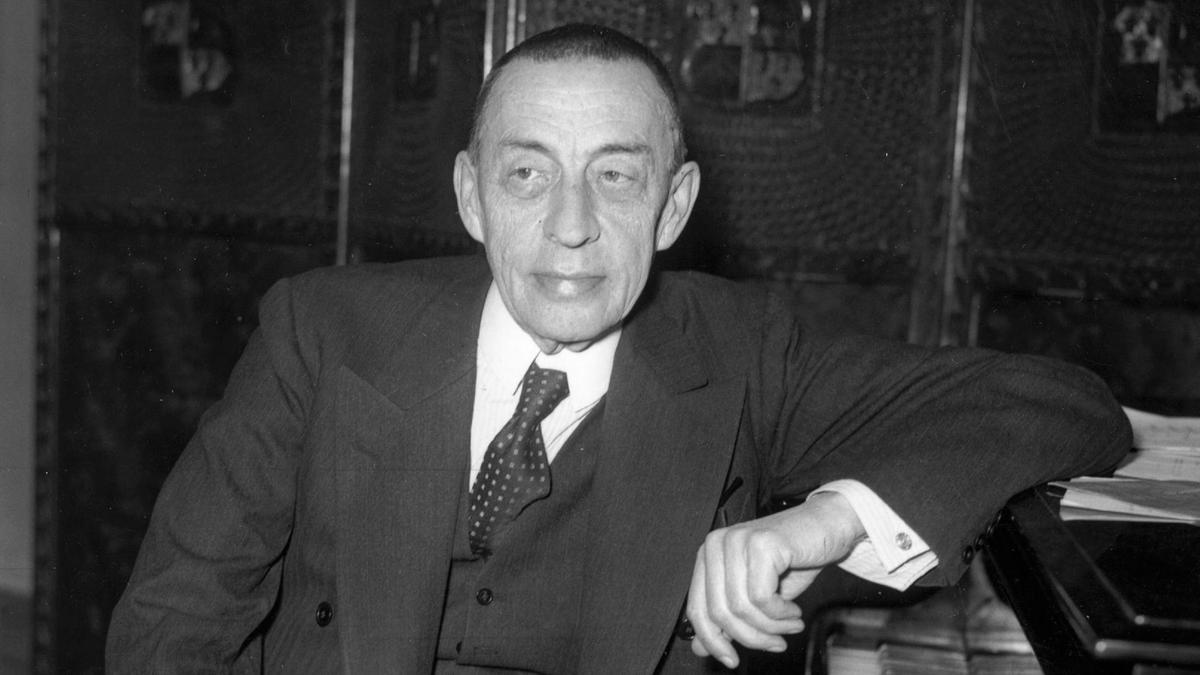 There is a fascinating moment of emotional release near the end of the first movement of Sergei Rachmaninov’s Symphonic Dances.

Completed in 1940 and dedicated to Eugene Ormandy and the Philadelphia Orchestra, this was Rachmaninov’s final composition. This music, which Rachmaninov described as “my last spark,” stands as an extraordinary musical summation. It reflects on the past with wistful nostalgia, yet we also get the sense of a spirited and joyful march into the sunset.

In these final bars, all of the first movement’s irrepressible forward momentum (which unfolds with a powerful rhythmic inevitability) suddenly evaporates. Accompanied by shimmering bells, we hear a brief but noble remembrance of the main theme of Rachmaninov’s First Symphony (the subject of Monday’s post)- a work which was received so badly at its premiere forty-five years earlier that it shattered the young composer’s confidence and plunged him into a psychological breakdown. With the theme’s emergence at this moment in the Symphonic Dances, we get a sense of Rachmaninov letting go of his demons. The movement’s remaining bars combine ebullience with quiet lament. The pulsating “C’s,” which develop out of a single strand in the opening, fade once again into silence.

Rachmaninov’s choice of title is unusual but appropriate. These are truly dances in which the orchestra comes alive with freedom and virtuosity. The spirits of Rachmaninov’s earlier works come out to dance and play. There are echos of the Rhapsody on a Theme of Paganini in the opening.  Later, we hear the triumph of the Third Piano Concerto’s final coda. The instrumental voices, with their distinct personas, also dance, including the soulful alto saxophone.

The second movement, Andante con moto (Tempo di valse), is a haunting waltz filled with shimmering colors. Echoes of Vienna and Tchaikovsky blend together into a hazy dreamscape. Notice the way the first movements opening pulse returns around the 17:38 mark. Could this rising chromatic line in the clarinet be a ghost from the 9/8 waltz from the first movement of Tchaikovsky’s Fourth Symphony?

The Dies irae (the ancient chant of the dead), heard throughout Rachmaninov’s music, returns in the final movement. Here, Death is locked in an exuberant battle with victorious Resurrection, represented by a quote from the ninth movement of Rachmaninov’s All-Night Vigil. The word, “Alliluya,” is inscribed in the score. Near the end of this final dance, the lush, soaring, romanticism that is so recognizably “Rachmaninov” returns. Then, we’re thrown back into the spirited battle. Listen to the way the colorful harp and woodwind glissandos around 33:39 anticipate the “flying” music of John Williams’ film scores.

This final, valedictory work is the ultimate celebration of the Dies irae. The ancient motive, which underlies so much of Rachmaninov’s music, is finally put to rest.