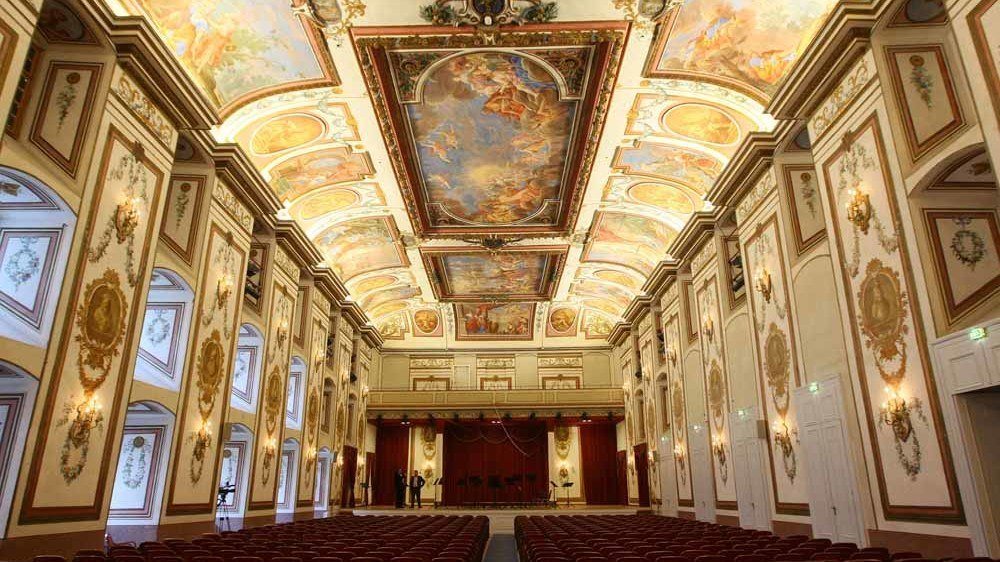 Franz Joseph Haydn’s Symphony No. 88 in G Major, completed in 1787, is undeniably firmly rooted in the classical tradition. Set in the standard four movements, it offers all of the courtly elegance, charm, and witty good humor we would expect from this innovative and prolific “father of the symphony.” At the same time, this Symphony, written two years before the outbreak of the French Revolution, contains some fascinating foreshadowings of music to come.

The first movement opens with a slow, halting introduction in 3/4 time. In the slow introduction of Beethoven’s Second Symphony, completed in 1802, there is a moment when previously wandering music seems to find itself and “kick into gear.” Something similar happens at the end of this introduction. The joyful and celebratory Allegro which follows opens with allusions to the open fifths of hunting horns. The entire movement develops out of the seed of this single theme. Listen to the thrilling way fragments of the theme are tossed around and turned on their heads in the adventurous development section. As we return home to the recap, notice the surprise addition of the flute line. The coda’s final bars end with witty banter between two “choirs” of instruments- the winds and strings.

After hearing the Largo “theme and variations” second movement, Johannes Brahms reportedly said, “I want my Ninth Symphony to sound like this.” Brahms’ quote suggests the prophetic, timeless nature of this music, which seems simultaneously noble and lamenting.

We might expect the opening theme to be stated by the first violins. But Haydn gives us the distinct and intimate paring of the oboe and solo cello playing an octave apart. Listening to this moving and seemingly inevitable duet, it’s easy to sense the personas of these two voices and the nature of their sublime message. The paring foreshadows a similar duet between the solo violin and horn in the equally reverent second movement of Brahms’ First Symphony. As I played Symphony No. 88 a few weeks ago in the orchestra, I couldn’t help but notice a more vague and probably unintentional similarity between the high point of Haydn’s striving melody and a similar high point in the main theme of the second movement of Beethoven’s Violin Concerto.

Increasingly complex and fanciful variations develop from this opening theme like branches on a tree. But the most memorable aspect of this movement may be the surprises that are in store for unsuspecting listeners. These come in the form of jarring interruptions by the trumpet and timpani that must have made the first audiences jump out of their seats. These edgy sounds of the French Revolution to come seem to anticipate the fire and fury of Beethoven’s symphonies. This was the first time Haydn used trumpets and timpani in a slow movement. (Mozart used them in the slow movement of the “Linz” Symphony). These out-of-place intruders stick around to the final bars.

The Minuet third movement takes us into the country with a rustic peasant dance. In the fun-loving trio section, we hear the open fifths of a bagpipe drone which shifts in delightfully “rule breaking” parallel motion.

As with the first movement, the Finale: Allegro con spirito is built on a single theme. In the recording below with Frans Brüggen and the Netherlands-based Orchestra of the Eighteenth Century performing on period instruments, I love the earthy “thud” of the basses beginning around 17:26. A few moments later, as the music ticks along with the precision of Swiss clockwork, the flutes seem to evoke birdcalls. There is one magnificently chaotic moment when all of this cool control is replaced by a sudden, unabashed eruption of contrapuntal fireworks. The finale ends in a G major blaze of triumphant celebration.

1 thought on “Haydn’s Symphony No. 88: Seeds of Romanticism?”