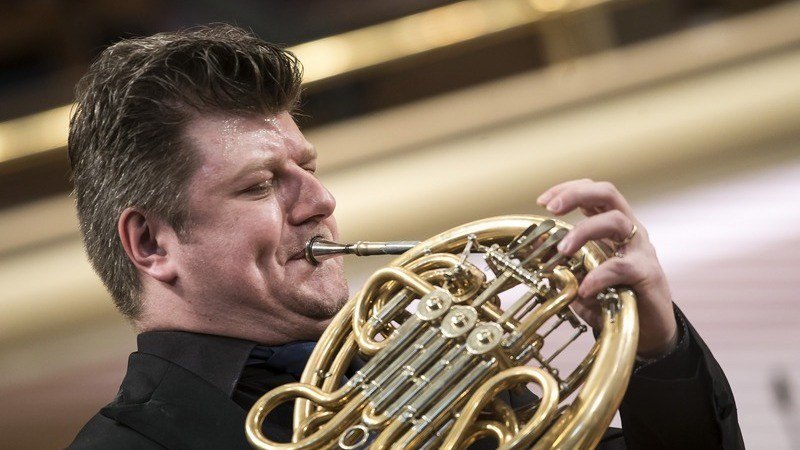 “You’ve got to hear this horn player named Radek Baborák,” urged one of my Richmond Symphony colleagues during a recent conversation.

To hear the extent of Baborák’s technical finesse and musicianship, one only needs to listen to his performance of the famous horn call from Richard Strauss’ Till Eulenspiegel.

Born in Czechoslovakia, Radek Baborák began playing the horn at age eight, was winning competitions by twelve, and became principal horn of the Czech Philharmonic at eighteen. He went on to hold the same position with the Munich Philharmonic, the Bamberg Symphony Orchestra, and the Berlin Philharmonic. Now, he tours as a freelance artist.

Here is his performance of Mozart’s Horn Concerto No. 2 in E-flat Major with Seiji Ozawa and Japan’s Mito Chamber Orchestra. Mozart wrote this music in 1783 for his lifelong friend, the horn player Joseph Leutgeb. The manuscript includes the jokingly goading inscription, “W. A. Mozart took pity on Leitgeb, ass, ox and fool in Vienna on 27 May 1783.”

The Concerto sparkles and leaps out at us with pure fun. It’s filled with operatic conversations between the instruments and sudden, dramatic surprises, like the sudden turn to minor in the first movement. The second movement is a serenely beautiful aria. Notice the haunting sense of surprise in this passage, and the emotional power (even sadness) of a single note in the violins a few moments later. In the final movement, we’re whisked off to the frolicking adventure of a hunting party.