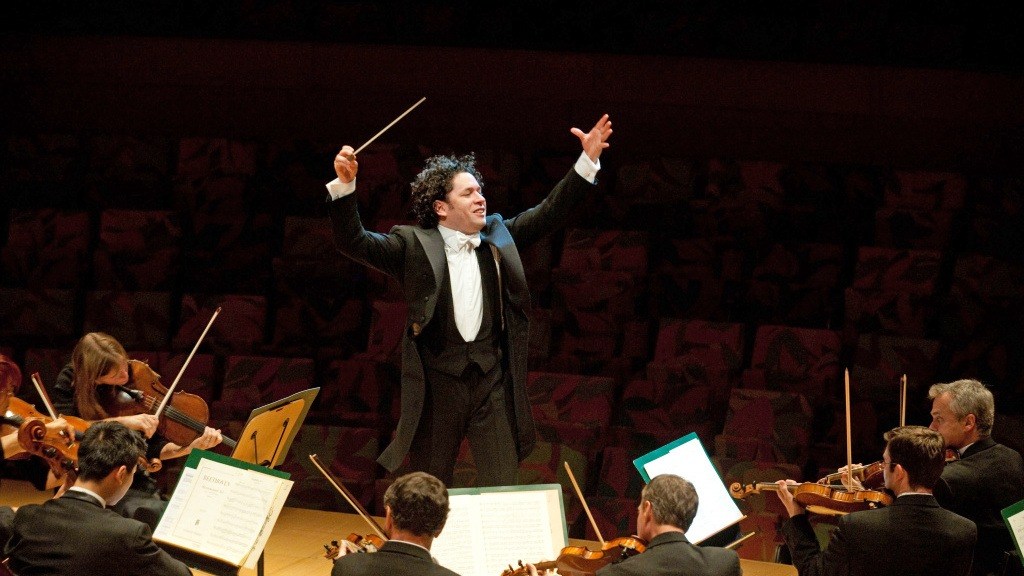 Tchaikovsky’s ballet, The Nutcracker, was received with ambivalence when it premiered at Saint Petersburg’s Imperial Mariinsky Theatre in December, 1892. Now, over a century later, E.T.A Hoffmann’s heroic story of death and rebirth comes alive on ballet stages around the world as a staple of the holiday season. It’s a piece filled with haunting melancholy and dreamy, shimmering magic. All of this can be heard in Tchaikovsky’s music, with its exotic, soaring melodies and lush, colorful orchestration. In previous posts, I have detailed my experiences in the orchestra pit playing multiple performances of The Nutcracker each season as a member of the Richmond Symphony.

Gustavo Dudamel and the Los Angeles Philharmonic offer the complete ballet score for The Nutcracker in a newly-released two CD set on Deutsche Grammophon. This follows the release of Disney’s new film, The Nutcracker and the Four Realms, which features James Newton Howard’s original soundtrack, also conducted by Dudamel. Howard’s score draws extensively on Tchaikovsky’s Nutcracker. Side-by-side comparisons of the two remind us that many of the sounds we associate with Hollywood film composers have earlier origins. For example, listen to the almost cinematically evocative nature of this music, which concludes the first act of The Nutcracker. Tchaikovsky also introduced glistening new sounds in the second act, using the newly-invented celesta to depict the Sugar Plum Fairy.

Tchaikovsky was one of the great melody writers of all time…The colors of ‘The Nutcracker’ ballet score have become a part of the vocabulary of film music. It’s where so much of the nineteenth century romantic music that I call upon as a film composer is rooted.

In Clara and the Nutcracker from the first act of The Nutcracker, listen to the way Tchaikovsky’s music moves from the “real” world of the Christmas Eve party to a dreamy world of fantasy. The music fades, gradually into the nocturnal shadows and you can hear the moment we cross over into that new, magical place inhabited by birdsongs, distant fanfares, scurrying mice, and an ever-growing Christmas tree.

Some of The Nutcracker‘s most sensuous and soaringly heroic music comes later in the first act with A Pine Forest in Winter. Even in this moment of serene, intimate beauty, we are swept along with a sense of buoyant motion, provided first by the underlying rhythmic heartbeat in the basses, and later by the fluttering heartbeat of the horn triplets.

Act I concludes with the shimmering dreamscape of the Waltz of the Snowflakes. In a previous post, we considered the rhythmic games Tchaikovsky plays, which occasionally disrupt our sense of where the downbeat falls. The music feels as if it’s about to lose its balance and spin out of control, yet it always manages to work itself out. One of these moments comes about halfway through this excerpt. Listen to all of the competing rhythmic grooves in multiple voices which give us a feeling of floating in midair: