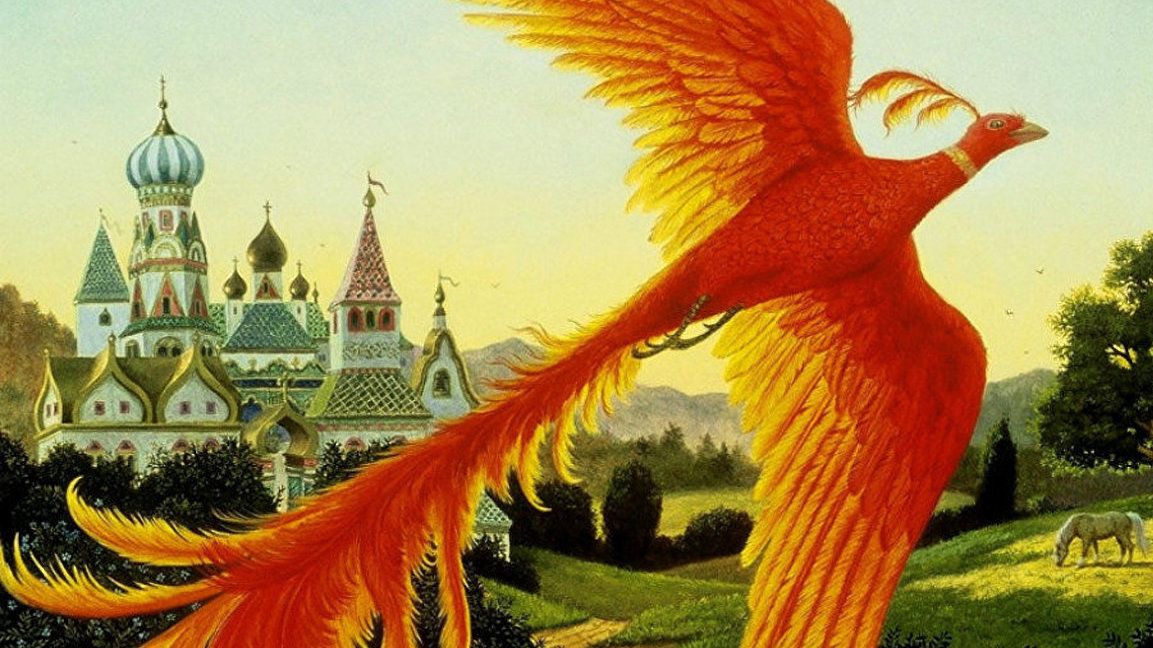 In 1909, Sergei Diaghilev, founder and director of the Ballets Russes in Paris, commissioned the 27-year-old Stravinsky to write the ballet score after offering the job unsuccessfully to four established Russian composers (Nikolai Tcherepnin, Anatoly Liadov, Alexander Glazunov and Nikolai Sokolov). The result was one of the twentieth century’s most monumental works- a piece which glances backwards at the colorful Romanticism of Stravinsky’s teacher, Nikolai Rimsky-Korsakov, while moving forward in a bold, new direction. In The Firebird, we hear the compositional seeds which develop in Stravinsky’s succeeding ballets with Diaghilev, the transitional Petrushka (1911), and the transformational Rite of Spring (1913).

The ballet’s fairy tale plot, rooted in Russian folklore, is summarized by Eric Walter White in his book, Stravinsky: The Composer and his Works:

A young Prince, Ivan Tsarevich, wanders into Kashchei’s magic garden at night in pursuit of the Firebird, whom he finds fluttering round a tree bearing golden apples. He captures it and extracts a feather as forfeit before agreeing to let it go. He then meets a group of thirteen maidens and falls in love with one of them, only to find that she and the other twelve maidens are princesses under the spell of Kashchei. When dawn comes and the princesses have to return to Kashchei’s palace, he breaks open the gates to follow them inside; but he is captured by Kashchei’s guardian monsters and is about to suffer the usual penalty of petrifaction, when he remembers the magic feather. He waves it; and at his summons the Firebird reappears and reveals to him the secret of Kashchei’s immortality [his soul, in the form of an egg, is preserved in a casket]. Opening the casket, Ivan smashes the vital egg, and the ogre immediately expires. His enchantments dissolve, all the captives are freed, and Ivan and his Tsarevna are betrothed with due solemnity.

Throughout The Firebird, the music of the evil sorcerer, Koshchei, is represented by the octatonic scale. Made up of alternating whole steps and half steps and inhabiting a world outside of major and minor harmony, this exotic scale shows up frequently in the music of Rimsky-Korsakov (in the operas Kashchei the Immortal and The Golden Cockerel, for example). The Firebird’s music is chromatic. In contrast, the music of Ivan and the Princess is diatonic.

Stravinsky’s 1919 Suite in five movements stands as a thrillingly dramatic concert piece, independent of the ballet. The opening of the Introduction suggests that the softest sounds are often the most terrifying. Unfolding with an ominous sense of inevitability, this barely-audible rumble results from half of the bass section playing hushed pizzicato while the other half uses the bow. No Hollywood horror film score has achieved anything more spine-chillingly demonic than these opening bars. A few moments later, another striking new sound is introduced with the otherworldly natural-harmonic string glissando. According to Stravinsky, this is a color which astonished Richard Strauss when he first heard it in Berlin two years after the premiere.

The L’Oiseau de feu et sa danse – Variation de l’Oiseau de feu (beginning at 3:22, below) depicts the magical blinding colors and furiously beating wings of the benevolent Firebird. The next movement, Ronde des princesses (beginning at 4:46) takes us into a shimmering, sensuous new world of impressionistic color. We hear the simple, plaintive sounds of Russian folk melodies. There are passages which evoke the lush Romanticism of the similarly-themed third movement (The Young Prince and the Young Princess) from Rimsky-Korsakov’s Scheherazade. The solo bassoon briefly foreshadows the motive which opens the Finale.

The serenity is shattered by the rude interruption of the Infernal Dance (9:40), in which the monsters of Kashchei’s realm leap about until they fall over in exhaustion. Here, amid the jagged syncopated rhythms, primeval jabs, and raucous glissandos, lie seeds of The Rite of Spring.

The Berceuse which follows (13:33) is a haunting, melancholy lullaby, punctuated by the lamenting voice of the bassoon and a hypnotic ostinato in the harp. The music drifts away into a vast, seemingly infinite dreamscape until a distant horn call emerges suddenly, signifying the lifting of the spell and a new awakening. The Finale (16:44) brings the ultimate joyful celebration in a procession of rising scales, from the harp to the trilling strings. The Firebird ascends in a final, triumphant flash of color. The soaring final bars seem to be saying, “and they lived happily ever after.”

Here is the 1919 Firebird Suite, performed by Myung Whun Chung and the Orchestre de l’Opera Bastille:

Here is the ballet score, performed by Pierre Boulez and the Chicago Symphony Orchestra:

2 thoughts on “Stravinsky’s “The Firebird”: A Shimmering Musical Fairy Tale”