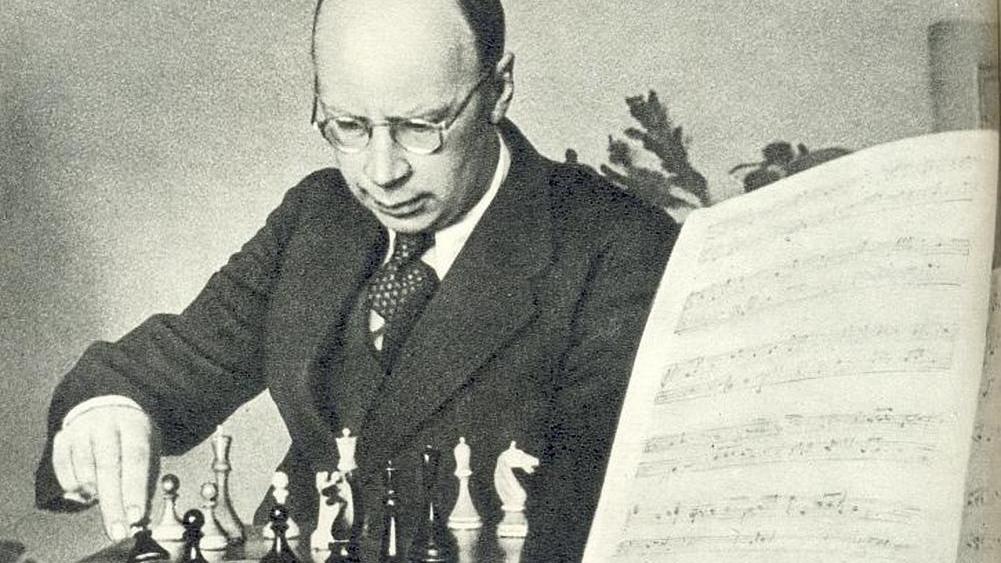 Last week, the Richmond Symphony returned to the orchestra pit for five performances of Sergei Prokofiev’s shimmering and comic 1944 ballet, Cinderella. Bringing off Prokofiev’s music, both technically and musically, often feels like solving a puzzle. Hovering somewhere between austere twentieth century Neoclassicism and moments of sudden lush Romanticism, this music is always keeping us off guard. We never know exactly how to take it. It is simultaneously humorous and sarcastic, cool and calculating (like the master chess player Prokofiev was), melancholy, and naively straightforward.

One of the most striking features of Prokofiev’s music is melody. Prokofiev’s melodies often set up our expectations and then pull us in previously unimagined and sometimes outrageous directions. They are filled with “wrong” notes, strange leaps, phrases which end too suddenly or run-on endlessly, and motives which would almost seem banal if they were not so ingenious. They stretch and bend tonality with an exuberant and infectious freedom. Equally important is the way this freedom spills over into harmony. Listen to the sudden and jarring harmonic curveball we are thrown in this passage from the third act of Cinderella. Moments like this remind us that no matter what key we’re in, an arbitrary modulation may be around the corner. We can move to any key, no matter how distant, purely for the fun of it.

This spirited melody is based in B-flat major, yet it alters the conventional notes of the scale, creating some delightful surprises. The rigidly marching underlying motor is filled with harmonic ambiguity that pulls our ear in many directions. As we move from the brief “B” section back to the original music (1:21), for one teasing, “wrong” note-filled moment, we doubt that the expected dominant-tonic resolution will be successful. In the opening measures, listen to the way the unperturbed clarinet wanders onto the scene, doing its own thing.

This haunting waltz from the ballet’s second act follows Cinderella’s arrival at the ball. Every phrase of this wandering melody ends in a new, unexpected place. Momentarily violent outbursts recede back into the shadows amid a swirling, dreamlike atmosphere. A naively amiable melody emerges in the clarinet. The excerpt fades into a splash of exotic color.

The quirky theme in this excerpt emerges first in the solo viola around 2:50. It rises in a passionate octave leap before falling back as a sighing lament. Each statement of the theme opens the door to a transcendent modulation involving a new set of voices. Before we get there, listen carefully to the way the shimmering and serenely beautiful opening of this excerpt evokes a blend of innocence and sadness.

You might not think this is much of a melody at all- just a meandering, chromatic clarinet line followed by descending scales in the violins. Yet this brief moment in the ballet’s first act opens the door to a distinct atmosphere not far from the pristine lines and sophistication of Prokofiev’s “Classical” Symphony. The rolling clarinet line in the opening may have influenced the splash of woodwind color at the introduction of Oh, Happy We in Leonard Bernstein’s Candide.

Romeo and Juliet: Dance of the Girls with Lilies

A melody which twists our ears with its chromaticism and always seems to give us the note we least expect is set against a placid backdrop which seems to suggest vaguely the Gymnopédies of Erik Satie.

The passepied was a sixteenth century French courtly dance which resembled a sped up minuet. In its opening measures, this melody sets up a fascinating harmonic ambiguity between two dueling key areas: D and G. By the end of the piece it is clear that G major is the winner. But that momentary pull to the “wrong” place is one of the details that makes this music so much fun.

In an earlier post, I featured the equally quirky Dance of the Mandolins from Romeo and Juliet. Now, here is another mandolin moment from near the end of the third act. From the solo mandolin, to the solo violin, to the brass choir, a unique cast of musical characters takes the stage. There is an echo of this melody around 1:24 in the Dance of the Girls with Lilies, which immediately follows the Morning Serenade in the ballet.

Cinderella: Dance of the Prince

By now, I’m sure you have noticed the strange contours of Prokofiev’s melodies, with their unexpected leaps. Perhaps the Dance of the Prince wins the prize for the most expansive jump in range. Only the most cruel music theory professor would ask a student to sight sing this melody!

We should thank Prokofiev for creating aspects of musical postmodernism and minimalism. And today’s Hollywood composers should erect a monument to him for the ideas he gave them!