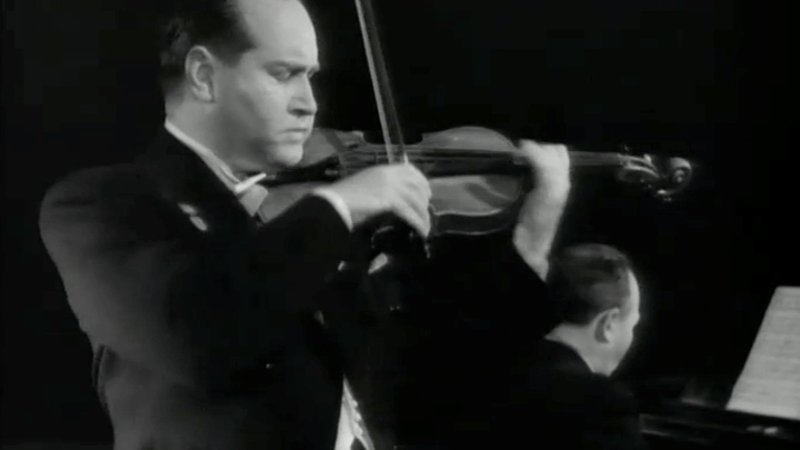 During the summer of 1943, Sergei Prokofiev escaped the war-torn Eastern Front for the isolation of the Central Asian city of Alma-Ata, where he was hard at work on the sprawling film score for Sergei Eisenstein’s Ivan the Terrible. In the middle of this massive project, Prokofiev found himself drawn to music on the other end of the spectrum- something he described as a “sonata in a gentle, flowing classical style.” This piece was born as the Flute Sonata in D, Op. 94 and, at the urging of violinist David Oistrakh, soon was reincarnated as the Violin Sonata No. 2 in D Major, Op. 94a.

The expansive melody which opens the first movement (Moderato) gives us a sense of this shimmering classicism. It’s as if we’re hearing a Handel or Mozart sonata through twentieth century ears. As you listen to this opening melody, notice the sudden harmonic turns which infuse the music with a kind of autumnal lament. As the movement unfolds, what might have been an overtly sunny D major is constantly pulled into the shadows. For example, listen to these haunting bars and the theme’s final echoes which come just a few moments later.

The second movement (Scherzo: Presto) is filled with wild scales and bitingly sarcastic dialogue between both instruments, alternating with a plaintive and exotic slower section which evokes Russian folk music. In the coda section, listen to the way the movement’s heroic theme attempts to make a final statement, but gets cut off by the more agitated theme. It makes a second attempt, jumping in a beat too late, which is also unsuccessful. The movement ends with the musical equivalent of both instruments tumbling down a flight of stairs.

The third movement (Andante) pulls us into a dreamy impressionistic soundscape. A melody which begins with a Mozart-like grace and elegance wanders harmonically into far-off corners (something similar to what we heard in the Prokofiev ballet music in Wednesday’s post). A hint of jazz emerges in the hazy, languid second theme.

The final movement (Allegro con brio) explodes with bold, euphoric jubilance. One of the most magical qualities of this movement is not only the range of contrasting “places” we visit, but how we get back to the “A” section. For example, listen to the way the return of the opening theme is anticipated towards the end of the flowing, cantabile section, first in the violin (20:33) and then in the piano (21:00). You can feel the music getting impatient. After an anticipation-filled buildup, it finally arrives home with renewed vigor.

Let’s listen to both versions of this virtuosic tour de force. First, here is the Violin Sonata, performed by David Oistrakh and pianist Vladimir Yampolsky on a 1955 recording:

Here is the original Flute Sonata, performed in 1975 by James Galway and Martha Argerich:

Prokofiev’s First Violin Sonata inhabits a much different world. You can find it at this previous post.