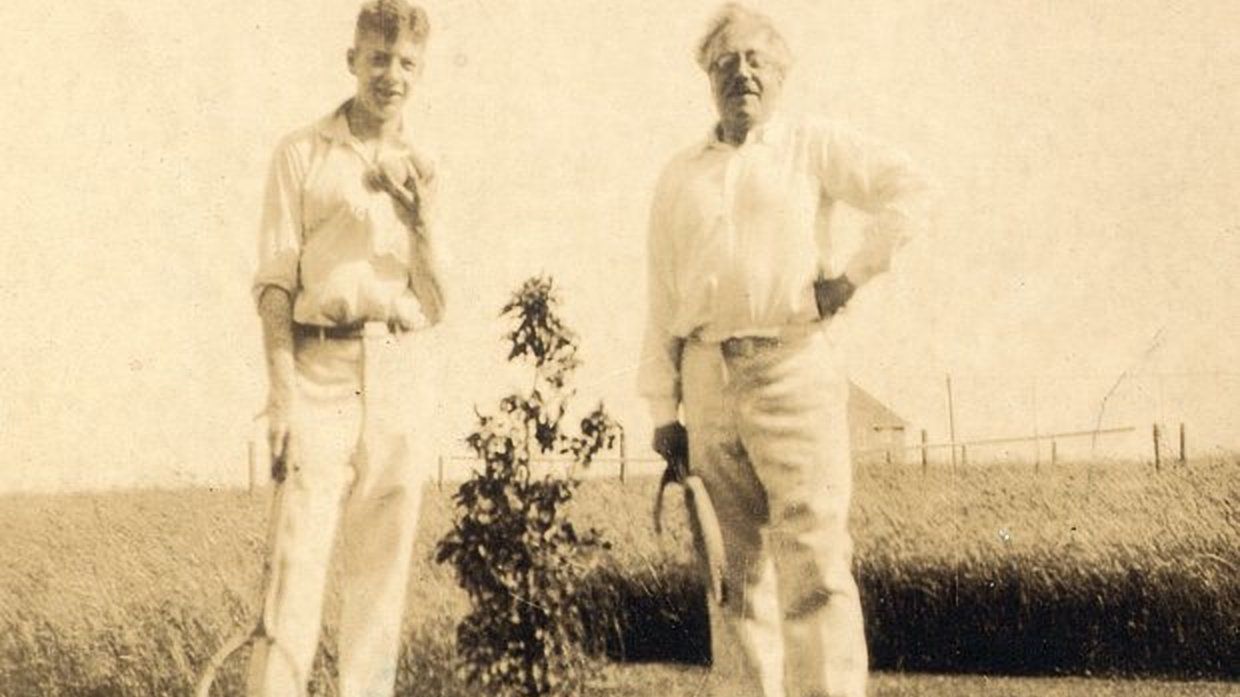 Last week, we listened to the vibrant orchestral tone poem Enter Spring by the maverick English composer Frank Bridge (1879-1941). It was at the Norwich premiere of Enter Spring in 1927 that the 13-year-old Benjamin Britten first met Bridge, who would become Britten’s composition teacher and mentor. Britten recalled

mammoth lessons: I remember we started at 10:30 and finished at tea time. Mrs Bridge came in and said “Really you must give the boy a break!

He really taught me to take as much trouble as I possibly could over every passage, over every progression, over every line.’ [Bridge demanded] scrupulous attention to good technique, the business of saying clearly what is in your mind.

For the young Benjamin Britten, Frank Bridge opened doors leading beyond English music to the Second Viennese School of Alban Berg and Arnold Schoenberg as well as Ravel and Stravinsky.

Britten’s Variations on a Theme of Frank Bridge, Op. 10, scored for string orchestra and completed in 1937 in response to a commission from conductor Boyd Neel and the Salzburg Festival, is the composer’s musical tribute to his teacher. As with Elgar’s “Enigma Variations,” Britten’s Variations form a musical portrait. In this case, rather than depicting the personalities of different people, the music suggests the different sides of a single figure— “his integrity…energy…charm…wit…gaiety,” as Britten wrote at the top of his sketches for the work. Yet, as we will see, the music goes far beyond this initial facade.

The theme is from the second of Bridge’s Three Idylls for String Quartet, Op. 6, No. 2, written in 1906. It’s a brief and wistful waltz which drifts through an ambiguous harmonic world, moving restlessly between major and minor. There are echoes of the disparate music of Elgar and Ravel. The final bars drift away like a fleeting ghost.

In the hands of Benjamin Britten, Bridge’s poignant melody provides the unlikely spark for daring and transcendent new music. These ten variations are filled with moments of haunting mystery, terror, sardonic humor, and otherworldly beauty. Strands of a wildly dissonant Viennese waltz blend with sunny remembrances of Rossini opera. It’s hard to know how to take this convention-shattering music. It certainly goes far beyond a musical portrait. In fact, if you’re really listening to this piece, you will soon forget about its superficial and supposed ties to the personality of Frank Bridge.

The Introduction roars to life with a ferocious and bold audacity, demanding that we listen. These darting and growling musical lines seem to be throwing off the shackles of Bridges’ theme as much as preparing us for it. There is something strangely rebellious about the opening bars of this piece which bears the dedication, “to F.B. A tribute with affection and admiration.” Bridges’ theme emerges briefly and then dissolves into the haunting and anguished Adagio which makes up the first variation.

From the brisk March of the second variation, to the quiet anxiety of the Romance, to the wild musical caricatures of the ensuing variations, this is a musical drama involving a bizarre and unexpected cast of characters. The eighth variation’s Funeral March, with its persistently recurring bass ostinato “drumbeat,” explodes with a new raw intensity before fading into a stunning and tension-filled non-resolution— a moment in which tonal function melts away into pure sound.

The opening gave us only a brief taste of Frank Bridge’s original theme before moving off into adventurous and far-flung new directions. Following the tenth variation’s vigorous Fugue, the theme returns with an elegiac grandeur as well as lament. The final bars leave us with a ghostly sense of awe and mystery.

If you are unfamiliar with Britten’s Variations on a Theme of Frank Bridge, I recommend more than one listening. Each time you approach this music, it seems to offer more. Here is a great performance by Sir Charles Groves and the Royal Philharmonic Orchestra: