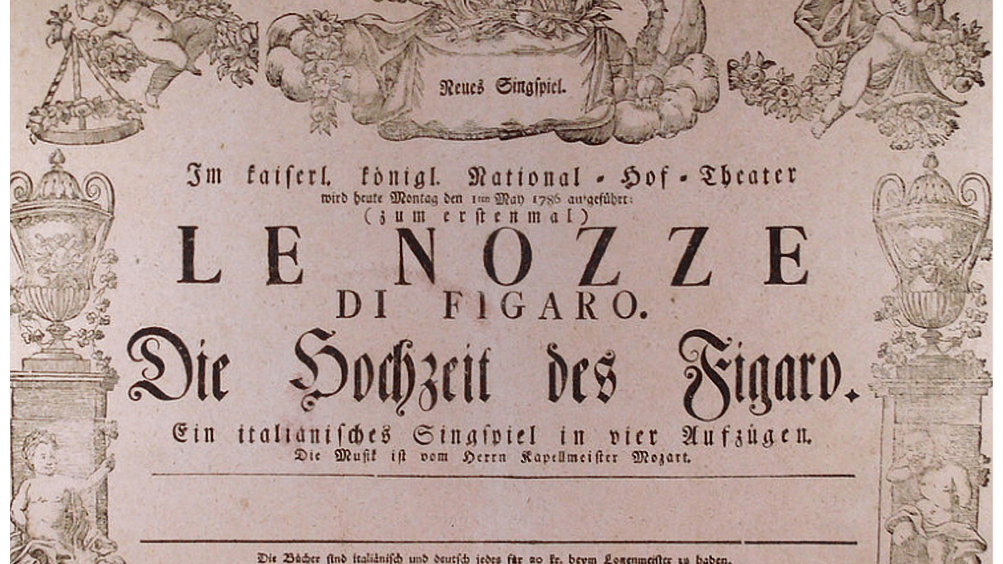 In his book, The Classical Style: Haydn, Mozart, Beethoven, Charles Rosen points out the amazing compositional feat that occurs at the end of the second act of Mozart’s The Marriage of Figaro. Citing its length (four acts) and “moral gravity,” Rosen considers The Marriage of Figaro to be Mozart’s first great “fusion” of opera buffe (or comic opera) with the dramatic weight and sophistication of opera seria:

Mozart’s ability to define character by purely musical means, to write for each of the three sopranos (the Countess, Susanna, and Cherubino) in an individual and characteristic way, provides the variety necessary for his structure…The tour de force of this new conception of musical continuity in drama as an increasing complexity of independent units is the famous second act finale, which moves from duet, through trio, quartet, and quintet to septet in a magnificently symmetrical tonal scheme.

The Marriage of Figaro, written in 1786, is filled with trickery, deception, overheard conversations, cunning disguises, and crazy schemes. Its libretto, by Lorenzo Da Ponte, is an adaptation of Pierre Beaumarchais’ 1778 play, La Folle Journée, ou Le Mariage de Figaro, which faced censorship because of its shameless intermingling of aristocratic and peasant classes. The plot centers around two members of the servant class, Figaro and his fiancée, Susanna (the Countess’ maid and confidant) who face obstacles on the way to blissful matrimony. First, there is the lecherous Count Almaviva, who believes that it is his “feudal right” to have his way with female servants before their wedding day. Then, there is Dr. Bartolo and his former housekeeper, Marcellina, who are determined that Figaro honor a contract which specifies that he must marry Marcellina in return for a debt. Meanwhile, the Count is enraged to discover that the young Cherubino (the page boy) has a crush on his wife, the Countess, along with all of the other women around. You can read all of the twist and turns of this “day of madness” here. Ultimately, The Marriage of Figaro is an exploration of the true nature of love and commitment.

The most exhilarating theatrical moments seem to sparkle and come alive with a special kind of energy. A visceral sense of flow takes over, giving us a sense of unstoppable dramatic motion. This is what happens in the gradual, tension-building crescendo of Mozart’s Act II Finale. By the final cadence, we experience the simultaneous inner thoughts of seven distinct characters. Even more amazing is the way the orchestra lines continuously rise to prominence, overlapping and engaging with the voices in an equally compelling but less specific drama. Listen to the way these rapidly-changing currents and countercurrents are expressed musically, encompassing everything from petty squabbles, to prolonged suspense, to a resolution in which nothing is solved. The final, thrilling moments bring the kind of brilliant counterpoint we hear in the final movement of Mozart’s “Jupiter” Symphony. With all of its unending detail and complexity, The Marriage of Figaro ranks among the most strenuous and unforgiving operas I have encountered as a violinist in the orchestra pit.

Here is a 2006 La Scala production with English subtitles, directed by Giorgio Strehle and featuring Diana Damrau, Ildebrando D’Arcangelo, Pietro Spagnoli, Monica Bacelli, and Gérard Korsten. The clip, below, is the entire opera. The Act II Finale begins at the 1:14:59 mark.

Here is a recording with the score: