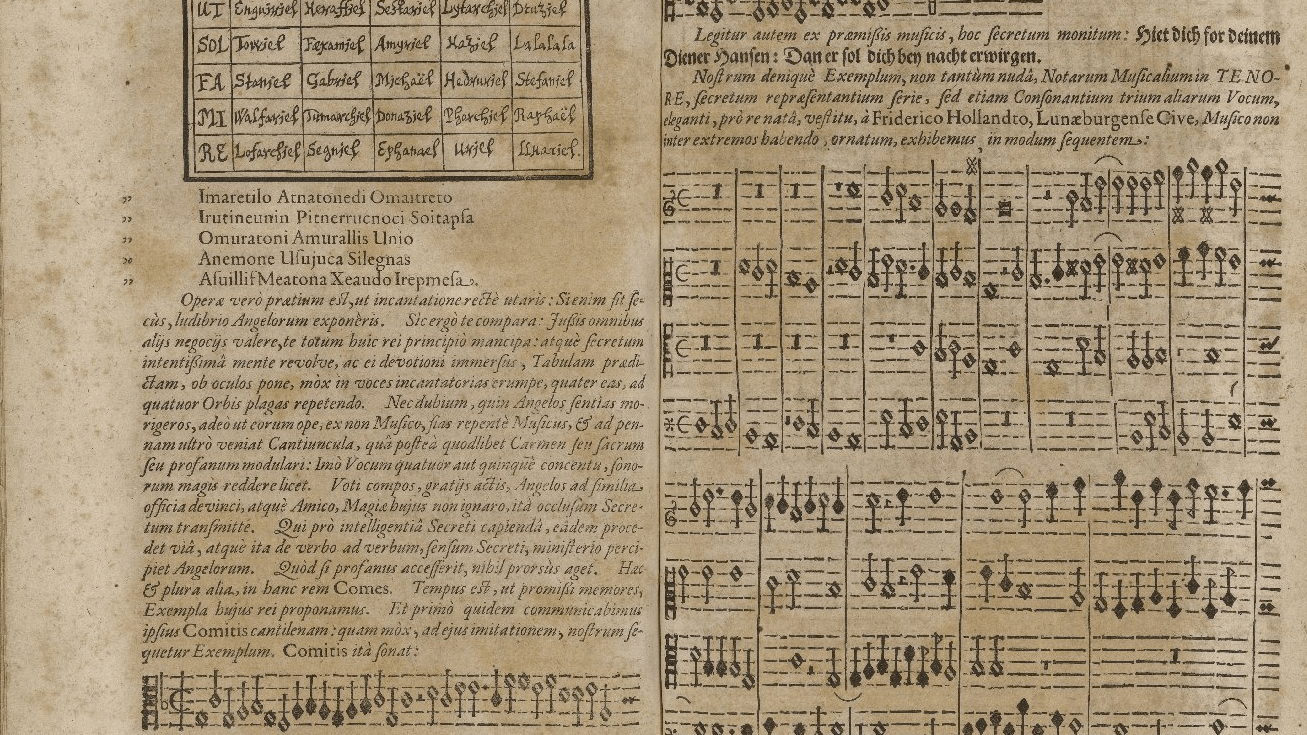 Imagine transmitting a secret message by using the pitches (from A to G) that are embedded in a musical score.

It’s been the subject of mystery novels and television shows as well as Philip Thicknesse’s 1772 book, A Treatise on the Art of Deciphering, and of Writing in Cypher: with an Harmonic Alphabet. During the Second World War, codebreakers considered the possibility that German and Japanese spies might use musical notes as a means of communication.

A surprising number of composers have also used musical cryptograms. On Wednesday, we heard the way Brahms’ Third Symphony develops out of a three-note opening motif—F, A-flat, F—which outlines the motto, “Frei aber froh,” or “Free but happy.” This was Brahms’ twist on the Romantic motto, “Frei aber einsam” (“Free but Lonely”), adapted by his friend, the violinist Joseph Joachim. This motto was translated to music in the 1853 F-A-E Sonata, a collaborative tribute to Joachim in which Schumann, Brahms, and Albert Dietrich each wrote a movement based on one of the letters. (Brahms’ Scherzo remains the most famous of the three movements).

Here are five pieces which include musical cryptograms. There are numerous additional examples, so feel free to share your favorite in the comment thread, below.

The music of J.S. Bach is filled with numerical symbolism. Additionally, Bach’s name is occasionally emerges as a musical motif with the pitches, B-flat, A, C, B. (In German musical nomenclature “B-flat” is called “B” while “B-natural” is “H”). Moving in steps with its final semitone surprise, the BACH motif is rich in possibilities. It shows up both as the main subject and as a passing bass figure in a number of Bach’s works. Numerous composers, from Schumann and Liszt to Schoenberg and Arvo Pärt, have returned to this motif. In a future post, we will survey this fascinating musical thread. But for now, let’s hear one of the most famous pieces in which the motif is used.

This is the final, unfinished fugue from Bach’s monumental The Art of the Fugue. You will hear the BACH motif at the beginning of the third subject. The fugue breaks off in mid-phrase, presenting us with a musicological mystery. Did Bach’s death prevent the completion of what was likely intended to be a quadruple fugue? This once-popular theory has been discredited. Perhaps the manuscript was lost, or perhaps this final fugue was purposely left incomplete as a challenge to posterity.

Here is a recent recording by Schaghajegh Nosrati:

The four notes are encoded puzzles, returning throughout Carnaval in a series of combinations: A, E-flat, C, B (A-Es-C-H in German), A-flat, C, B (As-C-H), E-flat, C, B, A (Es-C-H-A). These motifs refer to the town of Asch, the birthplace of Schumann’s then fiancée, Ernestine von Fricken. The German word for “Carnaval” is Fasching, and Asch is a reference to Ash Wednesday. The final motif (S-C-H-A) outlines the composer’s name.

Here is the complete work, performed by Arturo Benedetti Michelangeli:

The French system for musical cryptograms involves the entire alphabet, with H-N, O-U, and V-Z in lines under the original diatonic notes A-G. In Ravel’s score, H is represented by B natural, A and D are represented by their respective pitches, Y becomes D natural, and N becomes G natural. We hear these pitches in the rising motif in the top voice in the opening of the piece. It opens the door to music which is pure Ravel—a brief, beautiful, and sublimely simple dreamscape.

Here is a 1965 recording of Menuet sur le nom d’Haydn by Werner Haas:

The haunting Eighth String Quartet, written in three days in July, 1960 and dedicated “to the victims of fascism and the war,” opens with the DSCH motif. It returns throughout the work, screaming out in anguish in the ferocious second movement, and  fading into the shadows of the final Largo.

Here is a 2006 recording with the St. Lawrence String Quartet:

We’ll finish where we began—with the BACH motif. This distinct motif forms the seed for each of the three movements of Arvo Pärt’s 1964 Collage sur B-A-C-H for chamber orchestra. At a time when Pärt was turning away from twelve-tone modernism, this piece is filled with the ghosts of the Baroque concerto grosso.

Photograph: A musical cypher invented by Augustus the Younger, Duke of Brunswick-Lüneburg (1579-1666)