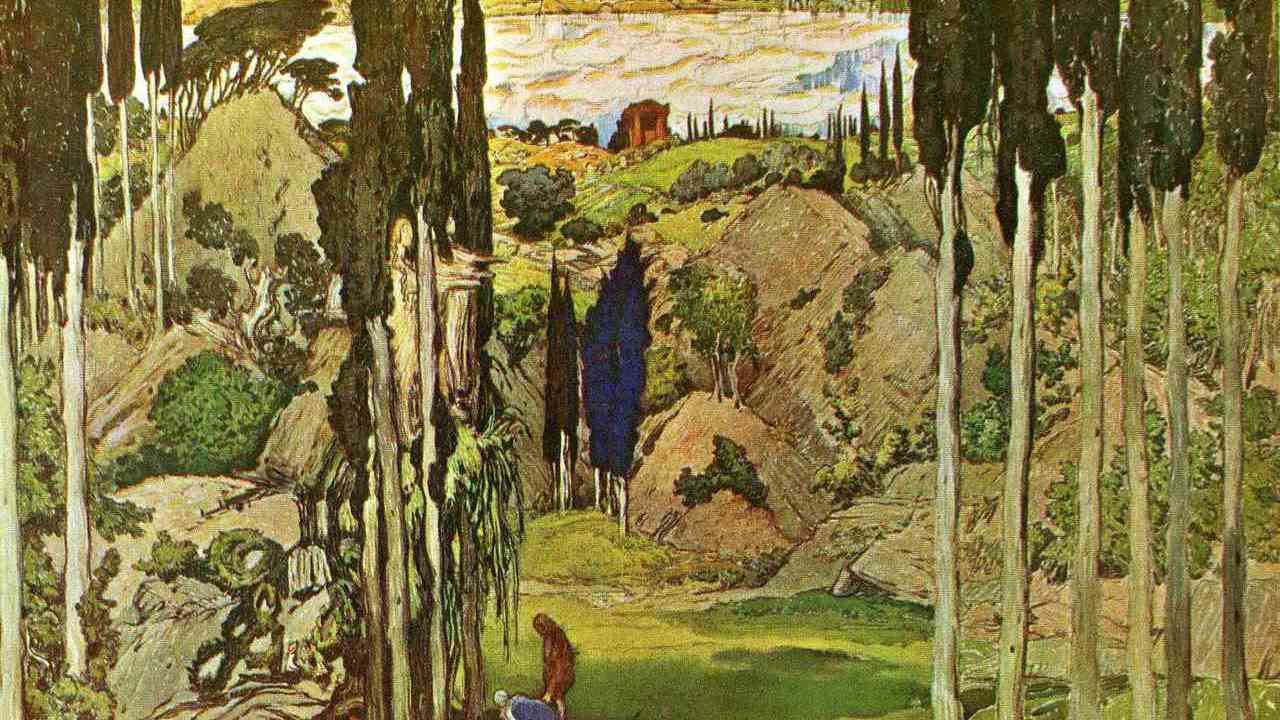 Maurice Ravel’s Daphnis et Chloé was conceived as a ballet score for Sergei Diaghilev’s Paris-based Ballets Russes. It premiered on June 8, 1912, two years after Stravinsky’s The Firebird and a year before the same composer’s riot-inducing Le Sacre du printemps. Yet this radical and monumental work—the closest Ravel ever came to writing a symphony—boldly transcends its original purpose. Scored for a massive orchestra and chorus and unfolding in three parts with four recurring leitmotifs, Ravel referred to this music as a “symphonie chorégraphique” (choreographic symphony). That description alone gives us a sense of powerful, unruly music which defies category and comes to life on its own terms. In fact, when we listen to Ravel’s Daphnis et Chloé we’re pulled into a visceral experience—a vast, sensuous dreamscape of shimmering colors and hypnotic motion. We hear the orchestra in new ways. Apart from the drama of its original ballet, Daphnis et Chloé is a drama of shifting instrumental voices and the ethereal, intangible tones of a wordless chorus, which blend to form a vibrant kaleidoscope of tone colors.

The opening Introduction et Danse religieuse emerges out of silence in the depths of the orchestra, moving from a single “A” through a series of primal open fifths. The voices seem to “wake up” and there is a feeling of intense, quiet anticipation as each resolution opens a new door. Listen to the way this particularly amazing harmonic progression, about five minutes in, unfolds into the ultimate resolution of soft, inevitable repose (at 5:13).

Part of the magic of this music is the way none of these resolutions give us the final word. Instead, they feel like stops along an infinitely-unfolding journey. The ephemeral nature of this music may remind you of the indistinct colors and shadows of Impressionist painting. One good way to listen is to close your eyes and allow yourself to float along, staying in the moment without worrying about where the music is going. At times, you may be reminded of the tremendous debt Hollywood film composers owe to Ravel, both in terms of orchestration and harmony. (Compare this ominous chord with a similar harmony at a crucial moment in Michael Kamen’s 1988 Die Hard score). Or compare the wild, colorful trills here with American Michael Torke’s exuberant 1994 orchestral tone poem, Javelin.

With the Danse lente et mystérieuse des Nymphes at the end of Part I, we get one of the most haunting and spine chilling passages in Daphnis et Chloé. For a brief moment, the tonal center dissolves and we find ourselves in a strange, alien land. A wind machine, or aeoliphone, adds a new dimension to the sound.

Part II (at 26:22, below) begins with chorus alone. We get a sense of wandering through a desolate landscape. Horn and trumpet calls initiate the ferocious and exotic Danse guerrière. As the cacophony subsides, we enter yet another sonic dreamscape with the veiled and seductive Danse suppliante de Chloé (33:35). The pastoral voice of the English horn, representing Chloé, recalls the serene landscape of Part I.

The opening of Part III (beginning around 39:47) brings the most famous and transcendent music in the entire score—a musical “sunrise” of epic proportions. It begins with bubbly figures in the woodwinds and harp and an ominous, searching, chromatic motif snaking through the double basses. Moments later, listen to the way a continuous motif begins in the lowest register and rises through the orchestra amid birdsongs in the solo violin and piccolo. This blossoms into an expansive melody, enveloped in glorious waves of sound. The climax of this passage comes with the reunification of Daphnis and Chloé and the restatement of one of the most memorable motifs from Part I.

From these highs, the music dissolves into the dreamy, almost hypnotic Pantomime (Les amours de Pan et Syrinx), in which Daphnis and Chloé mime the tale of Pan and Syrinx. The spirt of Pan comes alive in what conductor Gerard Schwarz calls “the greatest flute solo probably ever written.” The section concludes with a moment of blissful repose and lush sensuosity.

From here, Daphnis et Chloé moves into its astounding finale, the Danse générale (Bacchanale). Set in a persistent 5/4 time—an irregular meter that greatly challenged Diaghilev’s dancers—these final thrilling moments are a wild, celebratory eruption of color and sound. All of the Powers that makeup Ravel’s vast orchestra come out to play.

In his program notes, Thomas May includes a synopsis of the ballet, adapted from a story by the second-century Greek writer Longus:

Companions since childhood, Daphnis and Chloé are archetypal innocents, foundlings who have been raised in the peaceful pastoral landscape that serves as the ballet’s backdrop. Part One establishes the setting as taking place in pagan antiquity. On a spring afternoon, young men and women pause from tending their sheep to worship before an altar representing three nymphs. Shepherdesses dance around Daphnis, causing his beloved to feel jealousy. She then naively responds to the lustful advances of the clumsy cowherd Dorcon. When Dorcon engages in a dance contest with Daphnis, he loses and is then ridiculed by the group.

Taking leave of his beloved Chloé, Daphnis is left alone to muse to himself but then watches the seductive dance of another shepherdess, Lyceion. At this point pirates steal on the scene. Daphnis rushes to protect Chloé but is too late and sees the sandal she has left behind – evidence that Chloé has been abducted by the pirates. Despairing, Daphnis is comforted by nymphs, who summon Pan, the god of the wild and protector of shepherds.

Part Two takes us to the pirates’ camp on the seacoast. After they engage in warlike dance, their chief orders Chloé also to dance. Pan then intervenes, sending an army of satyrs, and the pirates flee in terror. In a remarkable transition scene, Part Three starts with a dazzling depiction of dawn. Daphnis wakes up before Pan’s grotto and is joyously reunited with Chloé. As the couple dance, their symbolic pantomime reenacts the story of Pan’s love for the nymph Syrinx. The dance turns increasingly passionate, and the surrounding crowd eventually joins in to participate in a communal dance that ends the ballet in “joyful commotion.”