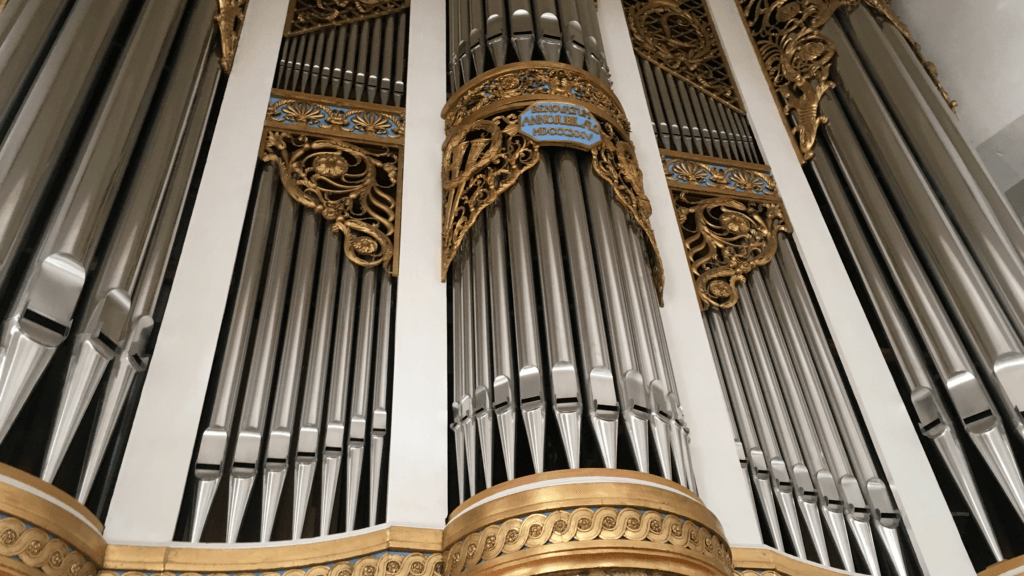 In his discussion of the extraordinary and haunting pedal tone at the end of the first movement of Bruckner’s Seventh Symphony, the composer and commentator Richard Atkinson goes back to J.S. Bach’s mighty Fantasia in G Major for Organ, BWV 572. (Atkinson’s YouTube channel is filled with insightful videos which take a fascinating look “under the hood” at a variety of music).

Bach’s Fantasia, or Pièce d’Orgue as it is sometimes called, offers a prime example of the musical pedal tone, a sustained harmonic “anchor” in the bass, so named because the organist plays it by holding down a foot pedal. The music theoretician Heinrich Schenker (1868-1935) suggested that when all of the harmonic complexity of a tonal piece is stripped away, its fundamental building blocks can be reduced to these underlying foundational harmonies. To put it simply, harmonically, everything in tonal music comes down to “I-V-I”—a process of moving away and returning home. How we take this journey is a large part of the drama.

It’s these primal elements, coming to the forefront, that make Bach’s Fantasia so powerful. In the opening bars, which sparkle like a volley of fireworks as a single voice in the organ’s higher register, we already get the first hints of pedal tones to come, first with the repeated G’s and then D’s. It’s as if we’re hearing the scattered pieces of a puzzle gradually come together.

This expectation-filled opening section sets the stage for the massive, five-voice chorale of the second section, marked Gravement (“Seriously”). Notice the way this section develops out of mighty rising scales in the bass line. (The second movement of Bach’s Concerto for Two Violins employs a similar rising bass line). We get the sense of an endless, soaring musical line which continuously unfolds from one awe-inspiring moment to the next. It almost feels like one, continuous musical phrase. Listen to the way the scale lines in the bass emerge at unexpected times and lead to surprising places. Finally, listen for the incredible moment where the scale in the bass line keeps rising like a mighty phoenix. For a moment, it seems as if will keep going forever.  This is what opens the door for the mighty, extended pedal tone on D (the V chord in G) beginning at 7:36. A jarring harmonic surprise in the form of a deceptive cadence launches us into a spiraling passage of dizzying chromaticism and instability. Then, the music once again finds its bearing with a return of the D pedal. This time, it can only lead one place—to a final and lasting resolution in G major.

The Fantasia in G Major, probably written around 1706, dates from Bach’s “Weimar years” during which time the young composer’s reputation as an organist grew. This performance comes from a 2000 recording by the Italian organist and conductor, Andrea Marcon: