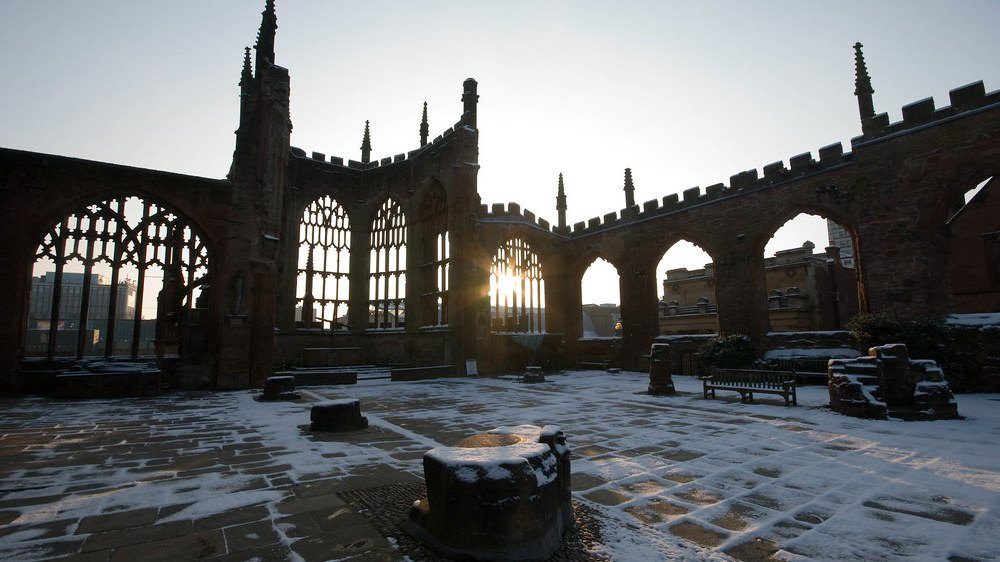 The “Symphony of the Celestial City…”

This is how biographer and classical music scholar Michael Kennedy poetically described Ralph Vaughan Williams’ Symphony No. 5. Indeed, this music, completed in 1943 as the Second World War raged, moves into an alternate world of radiant light, quiet serenity, and sublime mystery. Following Vaughan Williams’ ferocious and dissonant Fourth Symphony, it returns to the eternal, pastoral reassurance of England’s metaphorical “green and pleasant” countryside.

The term “Celestial City” also comes up in Vaughan Williams’ opera, The Pilgrim’s Progress, which he began in 1909 and completed only in 1952. When Vaughan Williams began sketching the Fifth Symphony in 1936, he doubted that he would ever be able to finish the opera, or the “morality” as he labeled it. Bits and pieces of The Pilgrim’s Progress sprang to life first as the building blocks of the Symphony.

The first movement, bearing the unusual title Preludio, emerges out of a haunting stillness. A falling D major motive, played by two horns, rises over a sustained “C” in the low strings, opening the door to a movement filled with harmonic ambiguity. The awakening violins intone a chant-like line. The musicologist Arnold Whittall has argued that “With respect to D Major [the Symphony’s home key], the Preludio might be regarded as a clear case of Schoenbergian ‘Schwebende Tonalität’ (‘fluctuating: suspended, not yet decided’ tonality). The movement’s final bars fade away without a clear resolution.

This is music which floats through a hazy, modal dreamscape filled with shimmering pastel colors. Unconcerned with distant goals, it feels suspended in midair and pulls us into an eternal present. Aaron Copland touched on this when he once said, jokingly, “Listening to the Fifth Symphony of Ralph Vaughan Williams is like staring at a cow for 45 minutes.” In fact, Vaughan Williams’ cow is grazing in the most ethereal and glorious of pastures. Close your eyes, listen deeply, stay rooted in the moment, and this music will offer a unique and powerful experience.

Vaughan Williams dedicated the Fifth Symphony “Without permission and with the sincerest flattery to Jean Sibelius, whose great example is worthy of imitation.” At moments you may hear echoes of Sibelius in the first movement. I am reminded of the rising and falling motif from the final movement of Sibelius’ Third Symphony. But these fleeting references seem superficial in the context of this distinctly English music. Just as significant is a quote of a fragment of Vaughan Williams’ majestic hymn, “For All the Saints,” (one of the four original hymns he contributed to The English Hymnal in 1906) as the first movement drifts into E major.

The second movement (Scherzo) is filled with swirling strands of sound which occasionally dart from one side of the orchestra to the other in a playful, antiphonal dialogue. Amazingly, six distinct motifs emerge in a dizzying, continuous stream of development.

The main themes of the third movement (Romanza) can be heard in the opening of Act I, Scene 2 of The Pilgrim’s Progress (“The House Beautiful”). In the manuscript, Vaughan Williams inscribed a quote from John Bunyan’s 1678 Christian allegory, on which the opera is based:

Upon this place stood a cross, and a little below a sepulcher. Then he said: ‘He hath given me rest by his sorrow, and life by his death.’

Free from its operatic associations, the Romanza becomes a sensuous conversation between instrumental voices. A lamenting English horn melody rises above deep and expansive layers of divided strings. The movement’s most soaring moments recall the most majestic English folk melodies. In the final bars, all of this luscious sound evaporates into the solitary voice of the solo violin. The Romanza fades into gentle, dreamlike serenity, and then silence.

The final movement moves through a series of exuberant variations built on the repeating bass line of a passacaglia. In this celebration of counterpoint, listen to the way all of these disparate voices weave together in a continuously unfolding drama. Suddenly, this joyful celebration hits a wall and we find ourselves back where we began in the haunting and mysterious opening of the first movement. The final moments drift off into sublime, hushed transcendence. Serene echoes of the “alleluia” from Vaughan Williams’ hymn, “All Creatures of Our God and King” (35:20) emerge as an ephemeral dream. Symphony No. 5 arrives at its ultimate resting place with a multi-octave-deep D major.