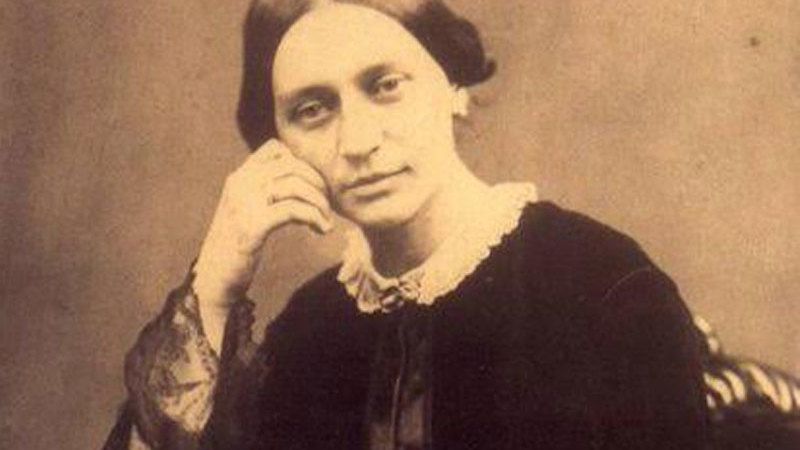 This Friday marks the two hundredth anniversary of the birth of Clara Schumann (1819-1896).

Clara Wieck Schumann looms large in music history. With a concert career spanning 61 years, she was one of the greatest pianists of the Romantic period. She is credited with elevating the repertoire of the piano recital, replacing bravura showpieces with substantial, mature works. She was an influential teacher at Frankfurt’s Hoch Conservatory. As a composer, she contributed piano concertos, chamber music and choral works. She was the wife of Robert Schumann and the close friend of Johannes Brahms. She has been portrayed in movies, from the 1944 German film Träumerei (“Dreaming”), to Hollywood’s 1947 Song of Love, starring Katharine Hepburn, to the recent 2008 Geliebte Clara (“Beloved Clara”) with Martina Gedeck.

On Friday, we will focus on Clara Schumann the composer. Today, we will consider Clara’s influence on the music of Schumann and Brahms. The most prominent manifestation of this influence is the famous “Clara Theme,” a descending, five-note motif which emerges with haunting persistence in the music of Robert Schumann and throughout Brahms’ late, autumnal piano intermezzi. It’s a motif which originated in Clara Schumann’s 1833  Romance variée, Op. 3, a set variations on a theme for solo piano. You can hear it in the top voice in this passage.

The five descending notes of the “Clara Theme” roar to life in the opening of Robert Schumann’s Piano Sonata No. 3 in F minor, Op. 14 written in 1836. In the Andantino third movement, the motif is transformed into a somber march. This motivic seed also returns in the Scherzo and the soaringly virtuosic Finale:

The “Clara Theme” emerges in the first movement of Schumann’s wildly Romantic Fantasie in C Major, Op. 17. It develops into the opening melody of the Piano Concerto in A minor, Op. 54. It’s there in the opening of Symphony No. 4 in D Minor, Op. 120 where it continues to return in a variety of iterations. The pianist Peter Halstead outlines a few of these examples in this podcast episode.

In May of 1853, the 20-year-old Johannes Brahms first met Clara Schumann, who was 37. As Robert Schumann descended into mental illness and entered the asylum where he would die a few years later, Brahms and Clara became close. The relationship has been described as “bordering between friendship and love.” During the final years of Clara’s life, Brahms began sending her the newly-composed piano Intermezzi. As Peter Halstead points out, in addition to a sense of deep autumnal lament and nostalgia, these works are filled with references to the “Clara Theme.” Upon receiving the Intermezzi, Clara noted, “In these pieces I at last feel musical life stir once again in my soul.”

The E-flat Major Intermezzo which opens Brahms’ Op. 117 set is infused with the “Clara Theme”:

In the Intermezzo No. 4 in E Major, Op. 116, the motif emerges from a serene dreamscape. As the music unfolds, it becomes a persistent presence, culminating in a wistful, never-ending cascade:

1 thought on “Schumann and Brahms: Musical Depictions of Clara”