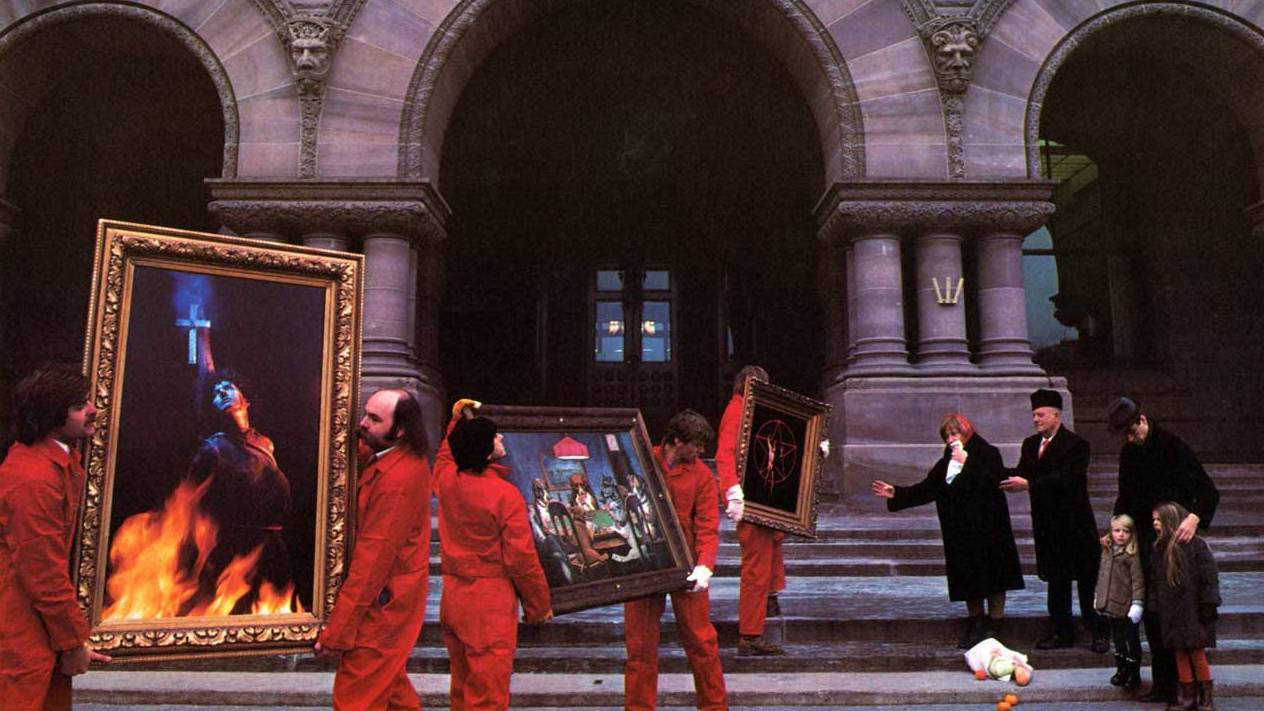 Neil Peart, the legendary drummer and lyricist of the Canadian rock trio, Rush, passed away last week after a battle with cancer. He was 67.

Rolling Stone rated Peart among the top five greatest rock drummers of all time. His playing exhibited a powerful virtuosity which frequently drew upon complex, shifting meters. Variety‘s recent tribute notes that “Peart was famous for his state-of-the-art drum kits—more than 40 different drums were not out of the norm—precise playing style, and on stage showmanship.”

According to Rolling Stone,

He joined singer-bassist Geddy Lee and guitarist Alex Lifeson in Rush in 1974, and his musicianship and literate, philosophical lyrics  – which initially drew on Ayn Rand and science fiction, and later became more personal and emotive – helped make the trio one of the classic-rock era’s essential bands. His drum fills on songs like “Tom Sawyer” were pop hooks in their own right, each one an indelible mini-composition; his lengthy drum solos, carefully constructed and packed with drama, were highlights of every Rush concert.

“Tom Sawyer” is the opening track of Rush’s celebrated 1981 album, Moving Pictures. Peart’s lyrics are an allusion to Mark Twain’s 1876 novel, The Adventures Of Tom Sawyer, with its themes of rebellion against authority, independence, and free-spirited adventure. The song was also inspired by Canadian poet and lyricist, Pye Dubois’ Louie The Warrior—a work Peart called “a portrait of a modern-day rebel.”

Alex Lifeson, the song’s coauthor said, “Structurally, the way the song develops is very interesting, going from that first verse into a bridge into a chorus and into the solo and then repeating…It wasn’t a typical kind of structure for us at the time.”

“Red Barchetta,” the second track on Moving Pictures, was inspired by Richard Foster’s futurist, dystopian short story, “A Nice Morning Drive,” published in the November 1973 issue of Road and Track magazine. In their book, Rush and Philosophy: Heart and Mind United, Jim Berti and Durrell Bowman offer the following analysis of the song’s metric complexity:

“Red Barchetta” itself repeatedly “fixes” its temporal complications at the ends of many sections. In the exciting passage that most closely approximates the feeling of speeding, unhindered, down an empty road (when the protagonist “commits his weekly crime”, 2:28-2:58), the music is filled with syncopated accents that keep thrusting us forward. In addition, each phrase takes away two beats from normative four-measure groups in 4/4; we’re moving faster than can be contained within standard phrases. But the last group, punctuated with Lee’s “adrenaline surge”, brings back those two beats—we’re entering a new zone, where time can now flow freely. And indeed, in the next section (2:58-3:18), while changing harmonies takes us on a bit of a journey, the phrases lock comfortably into relaxed four-bar groups in 4/4.

The following guitar solo (3:18-3:41) introduces further metric complications, alternating 4/4 and 3/4 bars for eight units of seven beats each. But again the last unit brings back the “missing” beat, making for a satisfying conclusion of eight beats before we head back into the main song. And for the final, peaceful phrases built around Lifeson’s guitar harmonics (from 5:10), while the initial groups imply 4/4 phrases lasting a somewhat unexpected two, six and again six bars, from 5:32 to the song’s fade normative eight-bar groups sound the rest of the way

At his Youtube channel, Everything Music, Rick Beato offers a fascinating analysis of the album’s fourth track, “Limelight.” The song opens with a riff which seems to pay homage to classic rhythm and blues. Then, it moves on into a dizzying series of shifting, sometimes irregular meters. Listen to the way the chorus moves abruptly from a rolling three to a defiant four at 1:10.