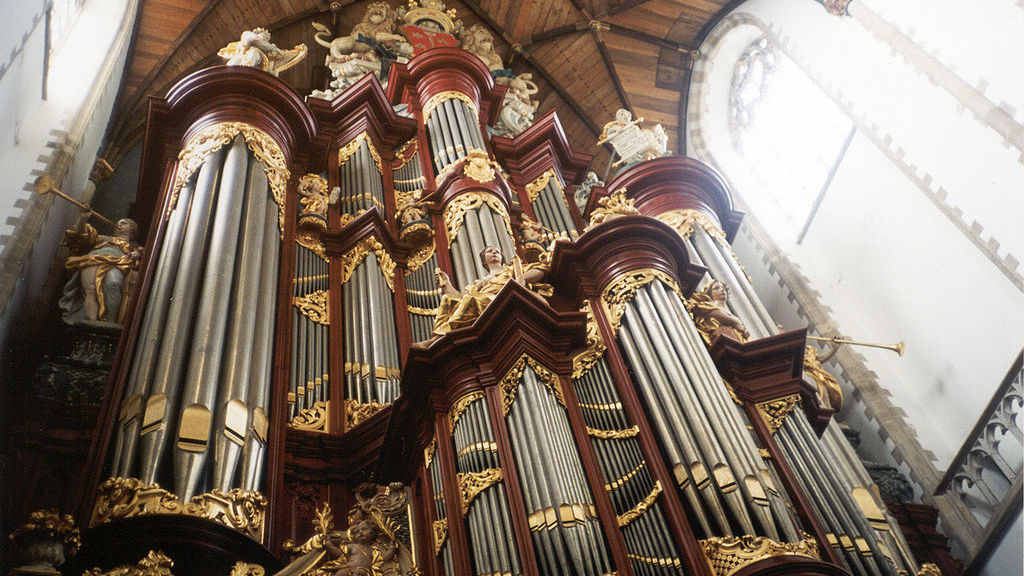 Throughout the music of J.S. Bach, G major seems to be associated with a distinct sense of joy and deep-rooted contentment. For example, consider the Fantasia in G Major for Organ, BWV 572, which opens in the instrument’s highest and most sparkling register with figures that skip along with an infectious, playful exuberance. This amazing piece, which we explored in a previous post, proceeds on into a massive five-voice chorale which concludes with a mighty pedal tone resolution.

An equally infectious sense of joy can be heard in Bach’s Prelude and Fugue in G Major BWV 550, a relatively early work written during the composer’s tenure as organist at Arnstadt (1703-1707). “The sound should come bouncing into the church and sweep you along,” says organist Matthias Havinga regarding the youthful vitality and dancelike quality of this music.

The Prelude begins with a single voice which announces its presence with childlike exuberance. Suddenly, the other voices “come out to play,” piling on top of this initial statement, and launching a whimsical musical game based entirely on the opening four-note motif. The final bars of the fugue arrive at a climax of pure sunshine.

Angela Hewitt says that Bach “has a twinkle in his eye” at the end of this frolicking excerpt from Book II of The Well-Tempered Clavier. (Follow the link to watch this video directly on Youtube).

Sonata No.6 in G Major for Violin and Harpsichord BWV 1019

This piece concludes a set of sonatas Bach wrote sometime before 1725 during his tenure as Kapellmeister at Cöthen. Its five movements are set in a “fast-slow-fast-slow-fast” scheme. The two slow movements (Largo and Adagio) move into melancholy territory (E minor and B minor, respectively) in contrast to the dancelike buoyancy of the other movements. Notice the way the violin and harpsichord interact as equals, with a vibrant contrapuntal dialogue. The opening movement springs to life with unabashed joy. In the euphoria of the opening bars, the music seems to become airborne, obscuring all sense of the downbeat amid exuberant competing rhythmic grooves.

This Trio Sonata, scored for transverse flute, violin and basso continuo, may have been performed at Leipzig’s collegium musicum chamber music series, which Bach began leading in 1729. The violin employs “scordatura” tuning. (Instead of the normal fifths of G-D-A-E, the strings are tuned to G-D-G-D). The expansive rising scales of the opening Largo, heard in a dialogue between the flute and violin, seem to evoke overflowing gratitude and contentment.

Our tour of Bach in G major concludes with the intimate, all-encompassing  joy and warmth of the First Suite for solo cello. The opening Prelude is a celebration of pure harmony. In this performance, Lucia Swarts plays a Pieter Rombouts made in 1705:

Tuning and the Identity of Keys

It’s worth noting that in his 1806 treatise, Ideen zu einer Aesthetik der Tonkunst, Christian Schubart described the characteristics of G major as,

Everything rustic, idyllic and lyrical, every calm and satisfied passion, every tender gratitude for true friendship and faithful love,–in a word every gentle and peaceful emotion of the heart is correctly expressed by this key.

Perhaps the perceived characteristics of keys in the Baroque and Classical periods grew out of unequal temperaments in tuning. Even Bach’s “well-tempered” tuning was not our modern equal temperament, in which all 12 fifths are narrowed by the same amount, making every key sound the same (equally “false”). You can hear how different Bach’s Air on the G String sounds in the old meantone tuning of the period. For more explanation, read Kyle Gann’s An Introduction to Historical Tunings.