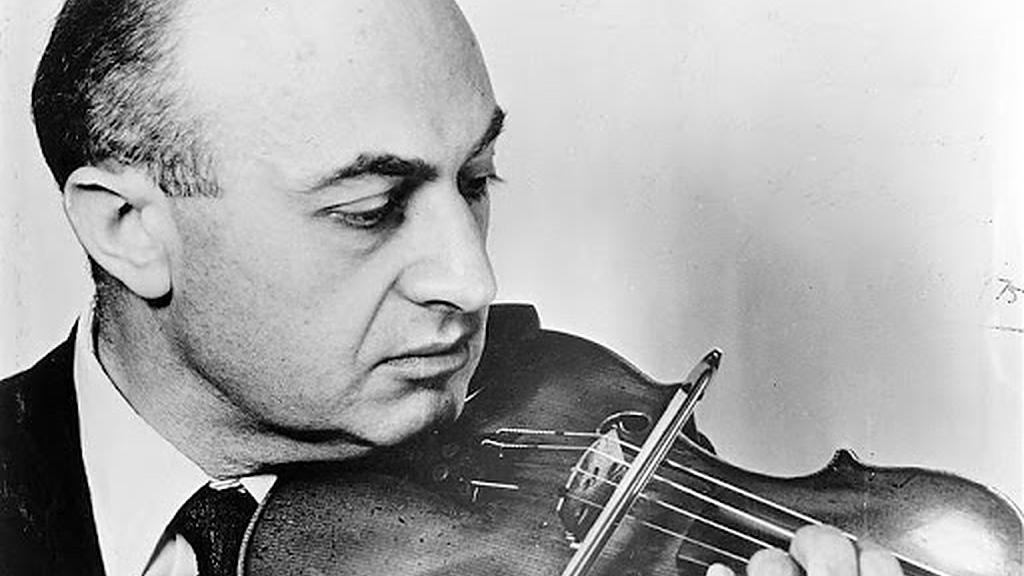 While you may not recognize his name, chances are good that you have heard American violinist Louis Kaufman (1905-1994).

Kaufman has been called “possibly the most recorded musical artist of the twentieth century.” In addition to making around 125 classical recordings, his rich, chocolatey sound is etched into as many as 500 film soundtracks. His singing tone, with its generous use of portamento and fast, shimmering vibrato, is the distinct sound we have come to associate with a bygone era, often called “Hollywood’s golden age.”

His Hollywood break came suddenly and unexpectedly in 1934. After hearing one of Kaufman’s radio broadcasts, the famous director Ernst Lubitsch offered him a double salary to play the violin solos for the film, The Merry Widow. (Here are excerpts from the soundtrack). In the following decades, Kaufman worked intimately with Hollywood’s most legendary composers, including Erich Wolfgang Korngold, Bernard Herrmann, and Max Steiner. He performed on the soundtracks of such legendary films as The Adventures of Robin Hood (1938), Gone With the Wind, Wuthering Heights (1939), The Grapes of Wrath, Rebecca, Pinocchio (1940), Now, Voyager (1942), Casablanca (1943), Laura (1944), Cinderella (1950), Spartacus (1960), Cleopatra (1963) and The Sound of Music (1965). In this rare test recording, we hear Kaufman performing music from Korngold’s score for The Constant Nymph (1943) with the composer at the piano.

Beyond Hollywood, Kaufman championed new works for violin by composers including Aaron Copland, William Grant Still, Walter Piston, and Robert Russell Bennett. He made one of the first recordings of Samuel Barber’s Violin Concerto. Additionally, he is credited with reviving interest in the music of Antonio Vivaldi, which had been all but forgotten for 200 years. Kaufman’s 1947 recording of The Four Seasons won the 1950 Grand Prix du Disque, as well as the Grammy Hall of Fame in 2002. It has been included on the Library of Congress’ National Recording Registry.

Throughout his career, Louis Kaufman frequently collaborated with his wife, the pianist Annette Kaufman (1914– 2016). She finished his memoir, A Fiddler’s Tale: How Hollywood and Vivaldi Discovered Me, which was published in 2003.

The lush “Hollywood” sound can be heard as an extension of a bel canto style which is close to the human voice. Perhaps this style of playing blossomed in Los Angeles in the twentieth century as a result of the large concentration of immigrant musicians from Eastern Europe. This soulful playing is in evidence in Louis Kaufman’s spectacular 1945 recording of Saint-Saëns’ Third Violin Concerto with the Santa Monica Symphony and conductor Jacques Rachmilovich:

Joseph Achron (1886-1943) was a Russian-born Jewish composer and violinist who emigrated to the United States in 1925. In 1934, he moved to Hollywood where he composed music for films and continued to perform as a concert violinist. Arnold Schoenberg described him as “one of the most underrated modern composers.” In German, Stimmung has a variety of meanings, including “tuning,” and “mood” or “atmosphere.” It is an appropriate title for the dreamy lament of Achron’s brief violin work. On this 1949 recording, Kaufman is joined by the Columbia Symphony, conducted by Bernard Herrmann:

Korngold: Excerpts from The Sea Hawk

Louis Kaufman’s violin solos can be heard in this excerpt from Korngold’s 1940 score for the Errol Flynn swashbuckler, The Sea Hawk. In the first sequence, Queen Elisabeth I (Flora Robson) leaves the throne room to have a “private audience” with Captain Geofrey Thorpe (Flynn) and his mischievous pet monkey. Motivically, the violin solo anticipates the first movement of Korngold’s 1945 Violin Concerto. In the scene which follows, the film’s soaring love theme accompanies Thorpe’s meeting with Dona Maria (Brenda Marshall) in the Rose Garden, foreshadowing their budding romance. The excerpts final moments pay homage to the voluptuous sonic grandeur of Richard Strauss’ tone poems.

Alfred Newman’s 1939 score for Wuthering Heights is filled with shimmering, layered strings. The lush, expansive, and slightly melancholy “Cathy’s Theme” is heard in the opening bars and weaves throughout the score. Listen for Kaufman’s solos:

Nowhere is the lush majesty of the old “Hollywood sound” more apparent than in the Main Title of Max Steiner’s score for Gone With the Wind. In the final moments of this clip, as we fade into the film’s first scene, Dixie emerges in the solo violin, played by Kaufman. Perhaps all of the film’s nostalgia and struggle is encapsulated in this single solo, which sets the tone for what is to follow.