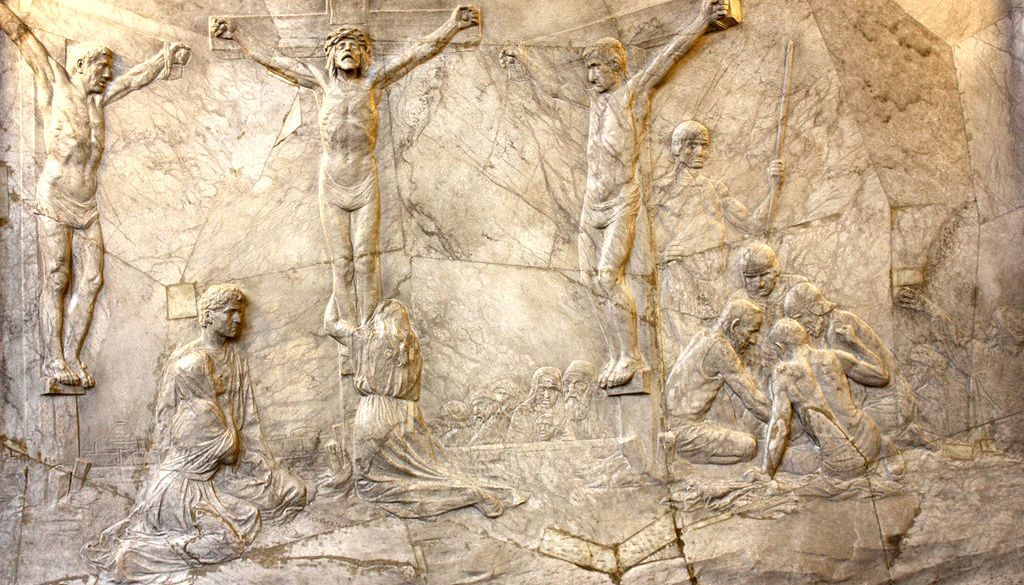 J.S. Bach’s St John Passion is a haunting and dramatic musical depiction of the Passion of Christ, as told in the Gospel of John. The story of Jesus’ capture, judgment, and crucifixion, as outlined in biblical passages from John 18 and 19, are presented by the solo tenor (the Evangelist). A cast of other singers perform the roles of Jesus, Pilate, and the disciples, while the four-part choir represents the people at large. Chorales, sung by the congregation, interrupt the flow of the plot at significant moments and allow for reverent reflection.

The St John Passion was written in the first year of Bach’s tenure as music director of Leipzig’s St. Thomas Church. It was first performed on Good Friday, April 7, 1724 at nearby St. Nicholas Church. The work was revised and changed for subsequent performances in 1725, 1732, and 1749. As a result, we are left with more than one version.

While Bach’s longer St. Matthew Passion, written three years later, depicts Christ’s human suffering amid bleak desolation and lament, the St John Passion treats the crucifixion as an act of divine transfiguration. The opening chorus begins with the celebratory lines, “Lord, our ruler, Whose fame In every land is glorious!” The work’s five part structure is highly symmetrical, with the trial’s discussions of freedom and captivity and the dictates of the “law” occurring in the center. A chorale interrupts this argument with the work’s fundamental message of liberation: “Through your prison, God’s son, we must have freedom.” This serene central chorale (Durch dein Gefängnis, Gottes Sohn) is surrounded by two motivically related choral movements in which the mob cries out dogmatically in favor of crucifixion. The Passion’s final chorus, Ruht wohl, ihr heiligen Gebeine, bids farewell to all lament and suffering and drifts off into a lasting, celestial peace. The closing chorale speaks of angels, sleep “without any anguish or pain,” and eternal praise. It brings us some of Bach’s most sensuous and bittersweet chorale harmony.

In addition to the drama of the story, we have the vibrant drama of the instrumental voices of the orchestra and their dialogue with the vocal lines. The opening bars set a quietly ominous tone with jarring dissonances and slithering chromatic lines in the flauti traversi and oboes. The unsettled, anxiety filled bass line lurches unpredictably. Later, echoes of this opening chorus return in the interlocking oboe lines of the alto aria, Von den Stricken meiner Sünden (“From the bonds of my sins”). In the next aria, Ich folge dir gleichfalls (“I, too, follow thee”), the flute enters into a joyful dialogue with the soprano. Here, Bach’s music gives us a visceral sense of  the skipping motion of the text’s “joyful steps” and references to being pushed and pulled. Near the beginning of the third section, listen to the way the tonal center frays, briefly, amid the wild chromaticism of the chorus’ crazed shouts, “If he were not a malefactor, we would not have delivered him up unto thee.” Distinctive colors emerge from Bach’s use of the lute, viola d’amore and viola da gamba. The bass aria, Eilt, ihr angefochtnen Seelen (“Hasten, you troubled souls”), depicts a frantic swirl of activity that often obscures our sense of the downbeat. The fourth section depicts the crucifixion and death, bringing the drama’s intense forward motion to a sudden halt. In the aria, Es ist vollbracht! (“It is finished!), we are left with the lamenting sounds of the viola da gamba.

Here is the Netherlands Bach Society’s 2017 performance, led by Jos van Veldhoven. You can open a second window on your device and follow the text, taking in all of the work’s layers of subtle word painting, or simply let Bach’s sublime music wash over you.