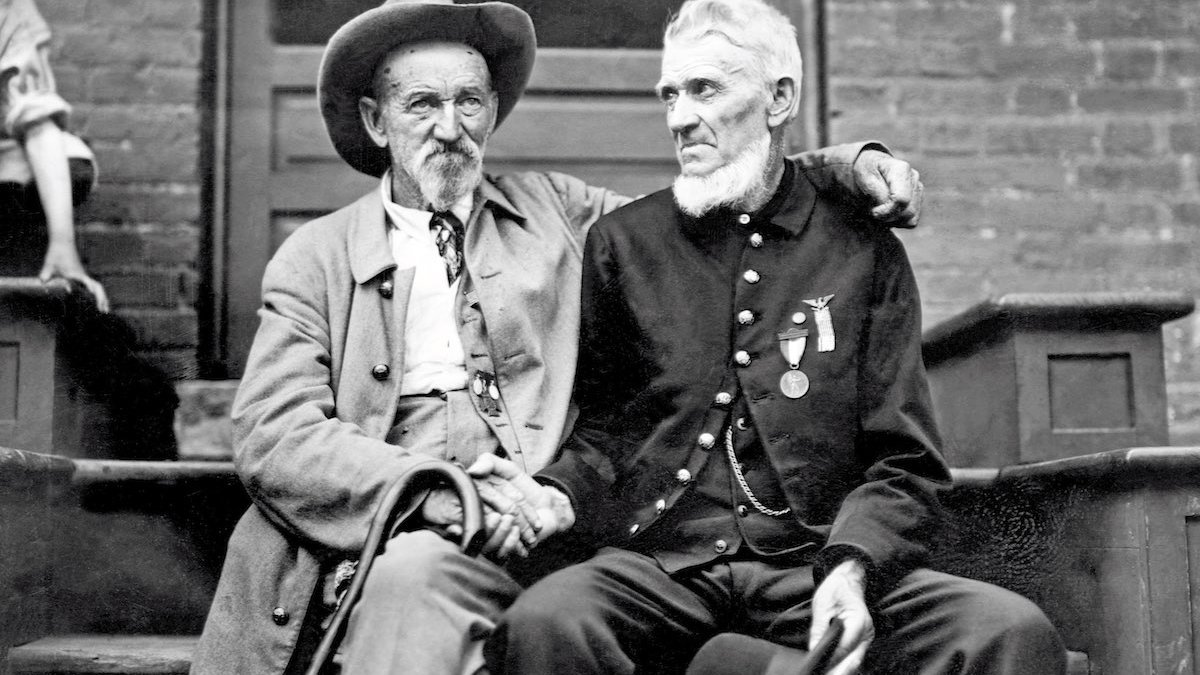 At the end of June in 1913, 53,407 veterans of the Battle of Gettysburg from both sides of the American Civil War returned to the hallowed ground in south central Pennsylvania where they fought. They were there to observe the 50th anniversary of the war’s bloodiest battle. The peaceful reunion was marked by an extraordinary sense of Union–Confederate camaraderie, as the photograph above illustrates.

Similarly, the journalist John Nichols observes that Walt Whitman’s 1867 poem, Dirge for Two Veterans “is an apt reminder that, when the fighting is done, those who warred against one another often find themselves in the same place.” The poem begins with the image of fading twilight and a newly dug double grave for a father and son killed together in battle. It is unclear if the father and son fought on the same side. Yet Richard Marius compares Dirge for Two Veterans with Shakespeare’s Henry VI in which “the feeble old king sees sons and fathers killing each other in a land torn asunder by civil war.”

A number of composers, including Gustav Holst and Ralph Vaughan Williams, have provided musical settings of Dirge for Two Veterans. One of the most distinctive settings was composed in 1942 by Kurt Weill as part of his Four Walt Whitman Songs. Weill, who fled his native Germany in 1935 with the rise of the Nazis and emigrated to the United States, proudly assimilated into the culture of his new homeland. According to the musicologist Kim Kowalke, in 1937 the composer told the playwright Paul Green, “I have the feeling that most people who ever came to this country came for the same reasons which brought me here: fleeing from the hate, the oppression, the restlessness and troubles of the Old World to find freedom and happiness in a New World.” Weill considered Whitman to be “the first truly original poetic talent to grow out of American soil.” Following the attack on Pearl Harbor, Weill considered his Four Walt Whitman Songs to be a patriotic offering.

Kurt Weill’s song pulls us into a quietly sensuous and dreamy soundscape, infused with echos of the blues and the cabaret. The music moves unpredictably between haunting dissonance and reassurance. Following the piano’s chilling introduction, listen for all of those strange, wandering “wrong” notes under the vocal line, which emerge like ghosts. The plaintive bugle call of Taps is woven into the song’s somber fabric (2:00, 3:16).

The moon gives you light,
And the bugles and drums give you music,
And my heart, O my soldiers, my veterans,
My heart gives you love.