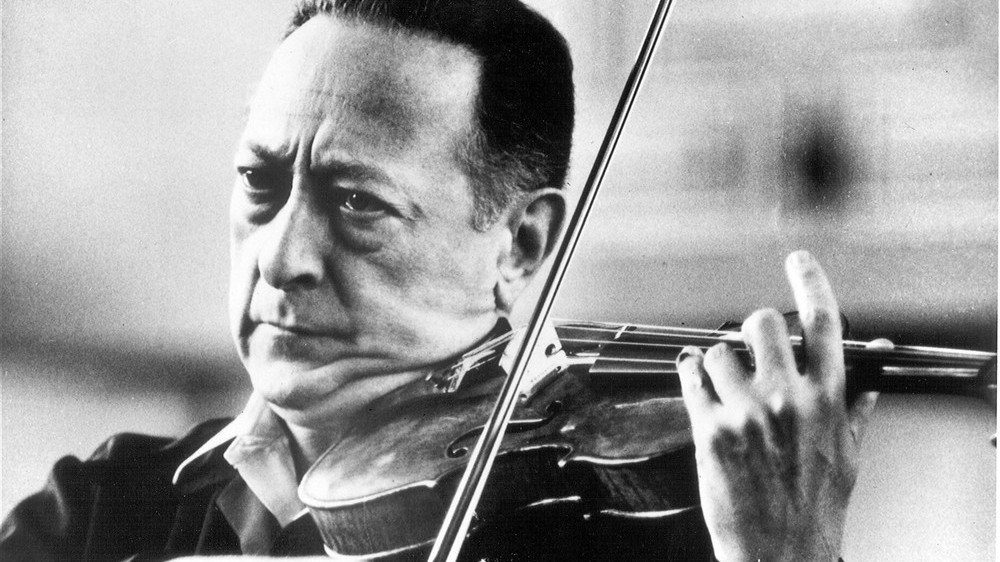 Miklós Rózsa’s career as a composer was built on a fascinating dichotomy.

Beginning in 1937, Rózsa produced some of the twentieth century’s most memorable and spacious film scores, including the Arabian fantasy The Thief of Bagdad (1940), the Alfred Hitchcock film noir psychological thriller Spellbound (1945), and the epic historical drama Ben-Hur (1959). The composer, who emigrated to the United States from his native Hungary in 1940, also created numerous enduring concert works, infused with the vibrant and distinctive Eastern European scales and folk rhythms we hear throughout the music of Zoltán Kodály and Béla Bartók.

Around 1953, Rózsa approached fellow Los Angeles emigre Jascha Heifetz through his accompanist, Emmanuel Bay with the intention of writing a violin concerto. The severe Heifetz often rejected newly written works after hearing one movement, so the collaboration was far from assured. During a negotiated break in his contract with MGM Studios, Rózsa settled into a rented villa in Rapallo, Italy and completed the Concerto in six weeks. After receiving the manuscript, Heifetz suggested that they set up a meeting in four weeks. Yet, when six months elapsed without word from the violinist, Rózsa assumed that Heifetz had lost interest and he began to look for another collaborator. Then, suddenly, Heifetz called. In what he later described as the most embarrassing moment of his career, Rózsa believed a friend was playing a practical joke on him. He replied, “If you’re Heifetz, I’m Mozart.” Luckily, the misunderstanding was quickly resolved, and Miklós Rózsa entered into the composer-performer relationship that shaped so many of the great violin concertos (Brahms’ association with Joseph Joachim comes to mind).

As with Rózsa’s 1963 Sinfonia concertante, written for Heifetz and cellist Gregor Piatigorsky, the Violin Concerto is filled with the distinct inflections of Hungarian folk music. Yet, there is also all of the shimmering color and soaring expansiveness of a larger-than-life film score such as Ben-Hur.

The first movement (Allegro non troppo ma passionato) opens with a restless alternation between duple and triple meter. The solo violin enters in the first bars with an expansive statement which soars into the singing upper register. The theme grows out of a motivic thread initiated by the solo clarinet. As it unfolds, the violin enters into a passionate conversation with voices of the orchestra. A few moments later, the solo horn enters into a plaintive dialogue with the violin. The extensive development section in the middle of the movement includes a mighty cadenza.

Years later, Rózsa adapted the Violin Concerto for his score for Billy Wilder’s 1970 film The Private Life of Sherlock Holmes. The opening theme of the nocturnal second movement (Lento cantabile) became the film’s love theme, soulfully evoking the main character’s status as an amateur violinist. The final bars fade into a dreamscape filled with mystery and shimmering colors.

The final movement (Allegro vivace) springs to life with an extended orchestral introduction. The violin enters with a jubilant and boisterous Hungarian folk dance. The music takes a wild and exhilarating ride to the virtuosic and brazen final bars.

Jascha Heifetz performed the premiere on January 15, 1956, appearing with the Dallas Symphony Orchestra let by Walter Hendl. This spectacular, standard-setting recording features the same performers. The searing intensity and audacious aplomb of Heifetz’ playing is on full display.

The power and grandeur of the big screen awaits. Come back on Wednesday when we will explore some of Miklós Rózsa’s most celebrated film music.