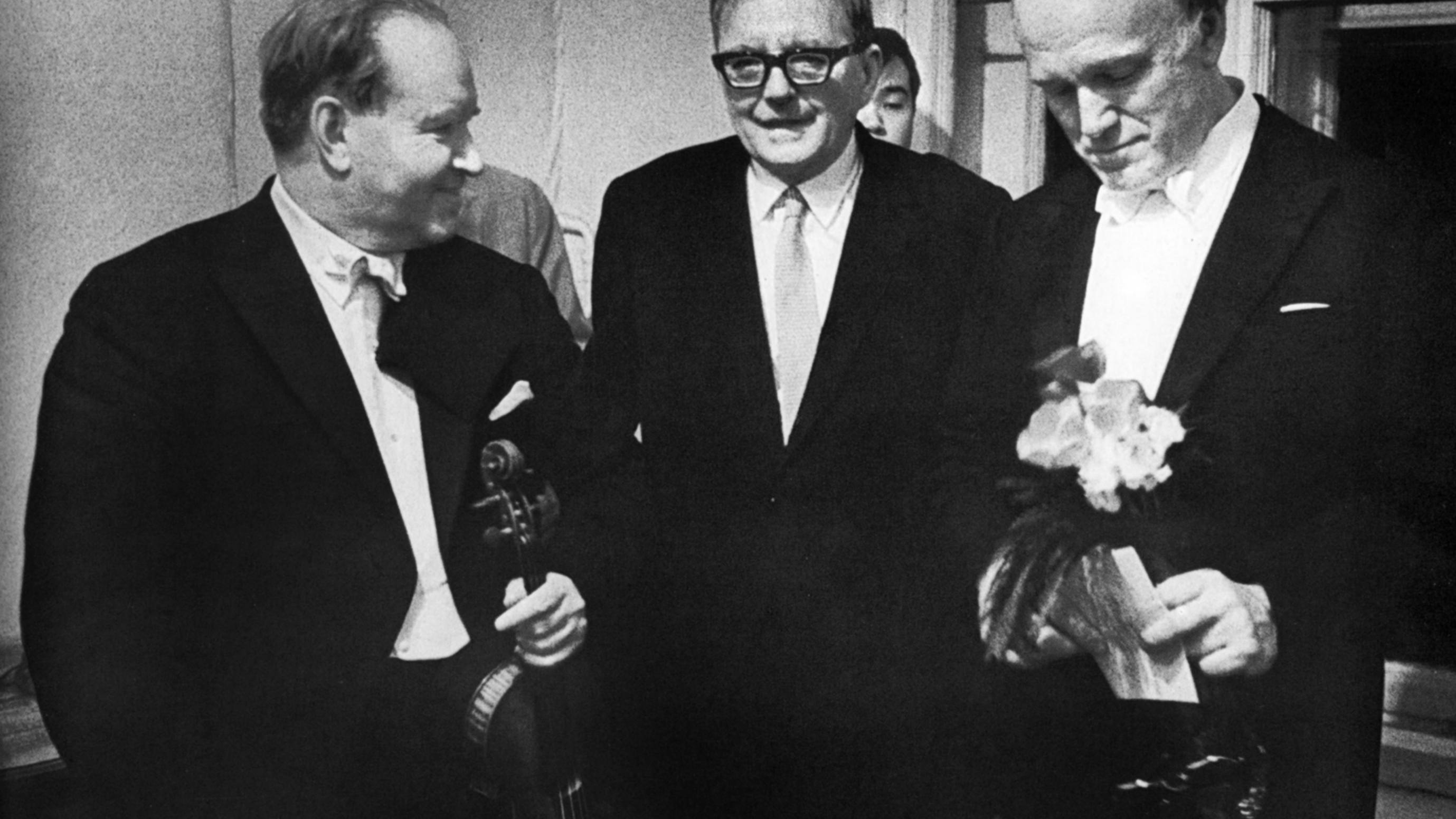 Dmitri Shostakovich’s Violin Sonata, Op. 134 was completed in the autumn of 1968. The title page bears the inscription, “For the 60th birthday of David Oistrakh.” Shostakovich had attempted to commemorate the great Ukrainian violinist’s 60th birthday a year too early with the Second Violin Concerto. Oistrakh explained,

Dmitri had been wanting to write a new, second concerto for me as a present for my 60th birthday. However, there was an error of one year in his timing. The concerto was ready for my 59th birthday. Shortly afterwards, Dmitri seemed to think that, having made a mistake, he ought to correct it. That is how he came to write the Sonata … I had not been expecting it, though I had long been hoping that he would write a violin sonata.

One of Shostakovich’s last works, the Violin Sonata occupies a haunting, desolate soundscape. It develops from a twelve tone row (all twelve pitches are present in the piano’s solemn opening statement), although the strict serial techniques of the Second Viennese School are not employed. Instead, these twelve opening pitches, rising and falling with deliberate steps without ever finding a resting point, are the raw materials for the ghostly adventures which follow. It’s easy to get the sense that this is music stripped down to its most pure, direct, austere form. Amid the gloom, intimations of Bach’s crystalline counterpoint hang in the air.

The first bars of this opening movement (Andante) may remind you of the beginning of Sergei Prokofiev’s First Violin Sonata. Later in the movement, the violin’s ghostly whispers over deep, ominous tolling bells in the piano are not far off from similar passages in Prokofiev’s Sonata, described as “wind passing through a graveyard.” Shostakovich’s initials (from the German alphabet) are inscribed in the violin’s initial notes D-eS-C-H (the notes D-E-flat-C-B). The second theme is a grotesque, off-balance march. The movement’s final bars bring raspy sul ponticello (the bow placed especially close to the bridge) and biting pizzicato. The muted violin sound seems to drift off under a blanket of ice and snow.

The second movement’s simple marking of Allegretto gives us little sense of the wild, demonic scherzo that is in store. Amid ever-building intensity, this terrifying music drives forward with a relentless, almost mechanical inevitability. In one passage, the violin shrieks in a way possible only within the harsh twentieth century sound world. It’s a frenzied peasant dance which devolves into “noise” akin to a sped up tape player. In this music, both violin and piano become percussion instruments. A ferocious climax comes in the final bars as the violin screams an incessantly repeated statement over the piano’s mighty octaves.

The final movement (Largo) is a series of dark variations on an eleven-measure passacaglia (a repeating bass line used frequently in the Baroque period). Following a stern “call to order,” the passacaglia begins with the violin’s solitary pizzicato. The unfolding variations come to a slow boil. Much of Shostakovich’s music is infused with the frustrated desperation of a “message” that cannot be fully expressed. In the final, haunting moments of the Violin Sonata, the music seems to give up and retreat back into the shadows. The ghostly whispers and ominous tolling bells of the first movement return, and the final notes fade into an icy chill.

This premiere performance, featuring David Oistrakh and Sviatoslav Richter, was recorded in the Great Hall of the Moscow Conservatory in May of 1969:

3 thoughts on “Shostakovich’s Violin Sonata: Oistrakh and Richter in 1969”