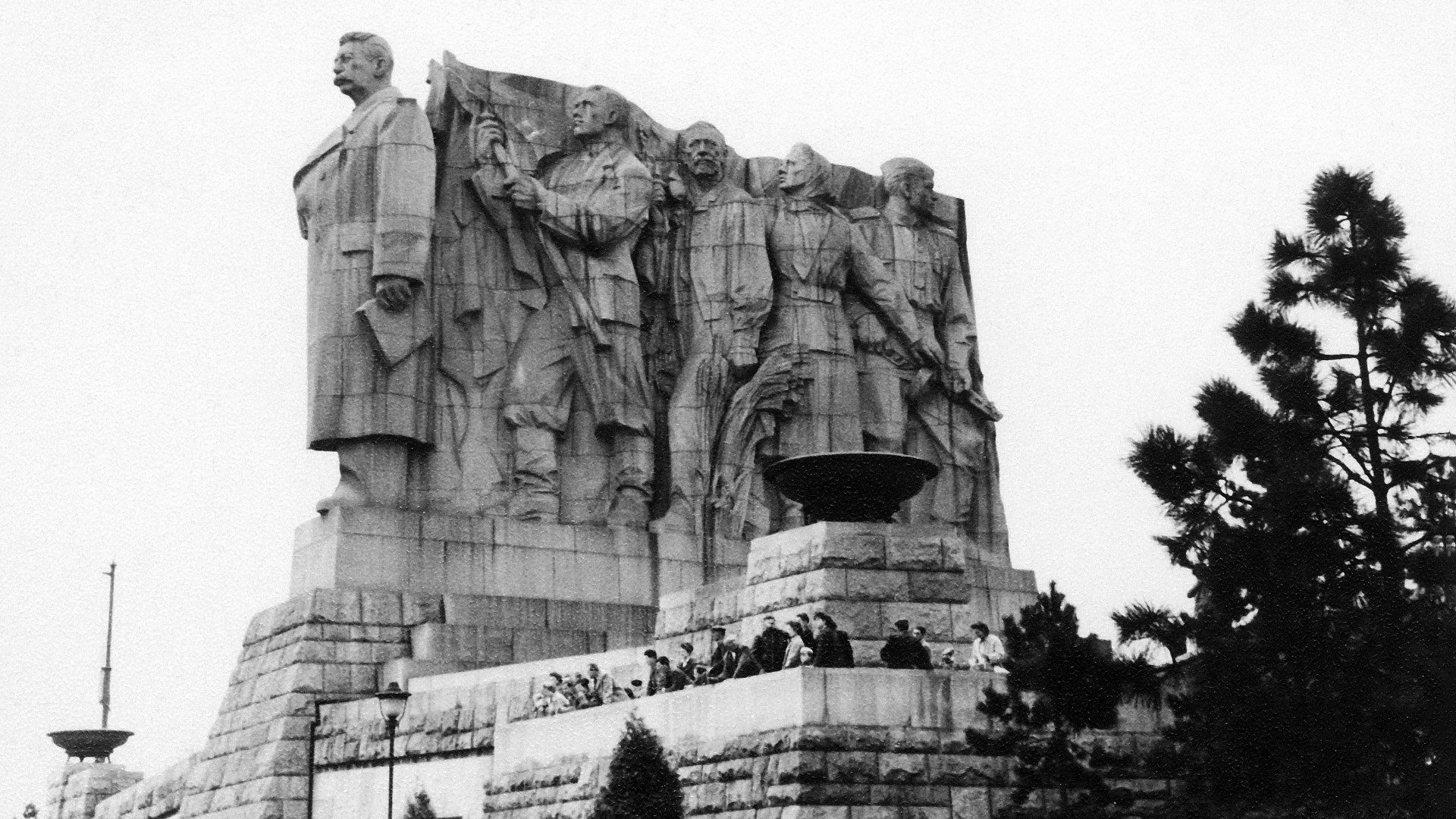 Dmitri Shostakovich’s 1932 opera, Lady Macbeth of the Mtsensk District, inhabits a grim world of “lust, loneliness, and murder.” Described by the composer as a “Tragedy-Satire,” it hovers somewhere between chilling terror and “grotesque vaudeville.”

The dark plot, based on a novel of the same name by Nikolai Leskov, is centered around Katerina Ismailova, a bored and oppressed merchant’s wife who lives in a provincial town. As John Henken writes in his summary,

Katerina takes a lover from among her husband’s workers. When her father-in-law discovers the affair, she poisons him; when her husband returns home, she and her lover Sergei strangle him. The pair wed and plotted to assume the family business when their crimes are uncovered. Now convicts, Sergei abandons Katerina for another woman prisoner; Katerina pushes her rival into a river and then dives in herself.

The opera’s graphic content was deemed “subversive” by Joseph Stalin, who walked out of a performance at Moscow’s Bolshoi Theatre on January 26, 1936. The 29-year-old Shostakovich was described as “white as a sheet” when he appeared onstage for the bows. Two days later, an editorial titled “Muddle Instead of Music” (possibly written by Stalin, himself) appeared in the official Communist Party newspaper, Pravda. It began with a chilling call for “good” music that would be appropriate for the country’s cultural development (“a simple and popular musical language accessible to all”). Lady Macbeth was denounced as “coarse, primitive and vulgar,” a “cacophony” of “nervous, convulsive, and spasmodic music,” and a “wilderness of musical chaos…Singing is replaced by shrieking…The music quacks, hoots, growls and gasps to express the love scenes as naturally as possible.”

It’s likely that Lady Macbeth, which had been playing for two years, had been selected by the Central Committee as the beginning of an iron-fisted campaign of cultural censorship. The opera disappeared, reemerging in a revised form only in 1961. The original, uncensored version was not performed again in Russia until 2000. Shostakovich never wrote another opera, and the long shadow of Stalin and the Soviet censors profoundly impacted his creative output.

The opera begins without an overture. The curtain rises and we are immediately pulled into the dark inner world of Katerina. Oppressed by unrelenting boredom and loneliness, her thoughts drift back to the freedom of her youth. As this opening aria fades away, Katerina is soon accosted by her abusive, controlling father-in-law, Boris.

As the opera progresses, Katerina is possessed by savage impulses. Yet in this musical daydream, she becomes humanized. She laments her loveless marriage and longs for something better. Her expansive opening lines rise over a dark, brooding bass line filled with moments of wrenching dissonance. We descend into the orchestra’s hellish depths with a wandering bass clarinet strand. At the same time, listen to the celestial upward leaps in the vocal register. The aria ends with the same haunting beauty we hear in the final bars of the third movement of Shostakovich’s Fifth Symphony.

Act I concludes with a graphic seduction scene involving Katerina and Sergei. The music, containing moments of burlesque comedy, has been described as “pornophony.” The conductor, James Conlon, offers a fascinating description of Shostakovich’s use of the orchestra throughout the opera:

Shostakovich’s orchestra becomes positively nasty…It screams, storms, repulses, excites, bites back. It shifts at will from tone-painting to editorializing, from expressivity to parody. Apart from Katerina, only the Old Convict in the final act escapes Shostakovich’s scathing commentary. Whereas Wagner’s orchestra has been likened to the inarticulate voice of the subconscious, Peter Conrad writes that Shostakovich’s ‘orchestra pit is the cellar where the stinking body…has been discarded.’ Its angry violence is akin to the early, iconoclastic Stravinsky and Bartók. It is an orchestra meant to overwhelm, pummel the stage into submission. But then it also can evoke deep pathos, loneliness, yearning, despair.”

This orchestral interlude precedes Scene 5. Dramatically, it follows the murder of Boris, whom Katerina has fed mushrooms laced with rat poison. Perhaps this music can be heard as a microcosm of Katerina’s overall psychological torment throughout the opera. Shostakovich uses the passacaglia, a common Baroque form in which a series of variations are built on a repeating bass line. Listen to the way this music rises out of the gloomy depths of the orchestra. Amid relentlessly building intensity, we hear shrieking woodwinds, titanic brass and percussion, and a wild weave of ghostly scales. The final bars fade back into the shadows.

Here is Andris Nelsons’ recording with the Boston Symphony Orchestra:

Featured Image: The Stalin Monument in Prague, unveiled in 1955 after more than five and a half years of work, and demolished in 1962.